They say life is about learning from your mistakes and moving on.

But, why wait to make a mistake when TV is full of loads of other people doing stupid things that you can learn from?

There’s no better place to cheat-learn from other people’s errors than Netflix’s award-winning Orange is the New Black.

Sure, there are some really obvious lessons on show there – mostly things like “don’t get roped into drug-smuggling by your gorgeous girlfriend” –  but it’s not all about not committing felonies. There are a few things that are handy in a life outside of prison walls as well.

So, to celebrate Lionsgate’s release of Season 3 on DVD, Blu-ray and Digital HD on Monday 16 May, we’ve gathered together the most important life lessons from the first two seasons…

Piper learns this one early on, and there’s a reason for that; it’s about the most important lesson there is. Insulting the provider of your food is just asking for retribution, grimness, and inedible revenge-food. Hopefully in the world outside prison that retribution won’t be quite so menstrual, but it’s best not to take any chances. Just smile politely and say that you love whatever is served to you.

Be careful in how you turn down romantic advances

Working out how to let down an admirer is always tricky – even more so when said admirer is known as “crazy eyes”. The key here is kindness. Be very, very kind when telling someone that you absolutely do not want to have a romantic or sexual relationship, or you may end up with bodily fluids on your floor.

Always, always take a lawyer’s advice over an ex-cons

This is another one which you’d think would be obvious, but Piper really does love to make some daft choices. So, if you ever find yourself in a situation where you’re faced with a choice between taking the advice of a legal professional who also happens to be related to your fiancé, or taking the advice of an ex-con who’s got a track record of screwing you over, go with the legal professional. Really. I hear they know what they’re talking about.

For once, this one’s not all on Piper. Sure, she wasn’t the wisest in rekindling her friendship/romance with the woman who’s responsible for her being in jail, but you’d still expect her fiancé and best friend to realise that shagging each other was probably off-limits. But then, Larry isn’t the wisest of fellas….

The genius Larry strikes again. Apparently, it didn’t occur to him that writing about Piper’s life in prison while she’s still there might cause her a few problems. He just wanted to get published, for he is a poor, struggling, kind of inept writer, and he hadn’t realised that there might be consequences of him going tiwh this particular story. Clearly, he and Piper are a couple who aren’t particularly good at making sensible life decisions.

It’s not just the world’s least sensible couple who make mistakes. This time, it’s poor Taystee, although at least her error is born out of her desire to believe the best. In particular, her desire to believe that the winner of the job fair will actually be given a permanent job when they get out of prison. Shockingly, this doesn’t turn out to be the case.

Always have your game face on

She’s a shell of a woman, with no power and no signature look. Until she decides to go to war, at which point the electric-shock hair and strange eyeliner return in full force. As does her power. It seems that while Samson had his power in his hair, the ladies of Litchfield Penitentiary have it in their makeup.

Once Red’s got her game face back, she also gets her family back. For family is the most important thing there is – something to be treasured, and longed for, and used to intimidate the crap out of people.

Don’t have a naturally scary family? No problem. As we once learnt from Spaced, the family of the 21st century is made up of friends. So the final, and most important lesson that Orange is the New Black has to teach us is a simple one; surround yourself with the right people, and you’ll be fine.

It’d just be nice if you and those people weren’t all in prison.

Season 3 and the complete Seasons 1-3 triple-pack are available to buy on DVD, Blu-ray and Digital HD from Monday 16 May. 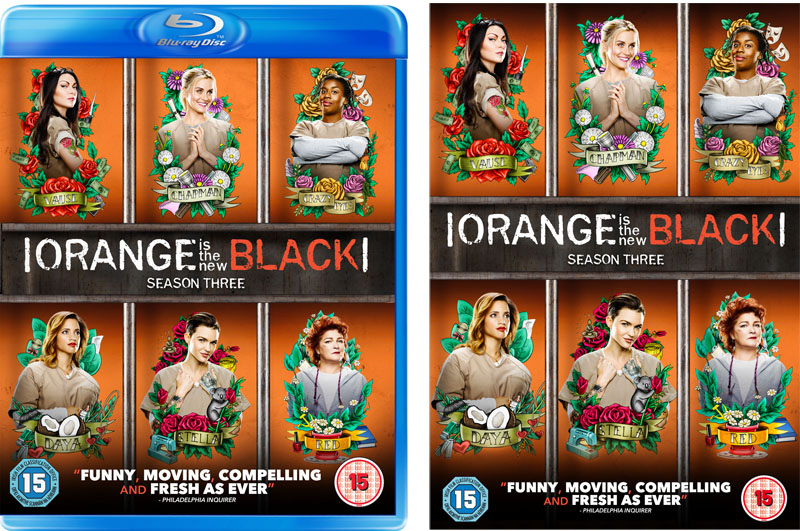 What’s your favourite lesson you’ve learned from Orange is the New Black? Let us know below…