When I asked Oliver Kent and Erika Hossington, Casualty’s Executive Producer and Series Producer respectively, for their favourite moments from the last 30 years they got back to me with a list of moments including one very special scene from the end of the 30th Anniversary episode.

There was just one request. Erika asked if I could keep this particularly heart-warming moment secret until after the episode had aired in order to preserve the surprise for the audience. It was, of course, a total no-brainer to hold this one back. 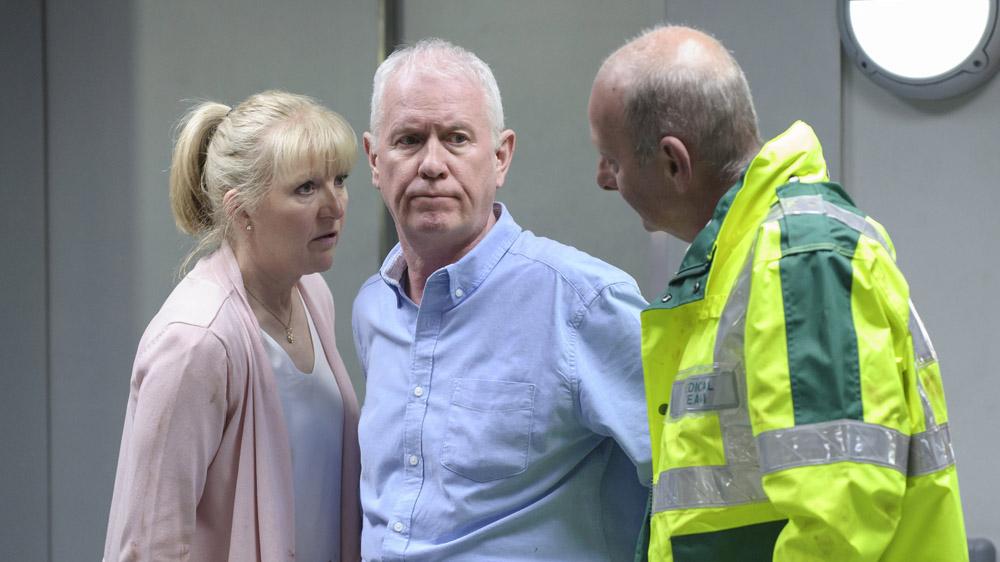 So, now that the dust has begun to settle on ‘Too Old For This Shift’ and the audience have wiped away their tears, CultBox can reveal Erika and Oliver’s joint favourite Casualty scene along with a selection of other memorable moments.

Buy the complete first season of Casualty on DVD on Amazon here.

Enjoy your stay in Holby City’s Emergency Department and please remember not to disturb the patients!

Oliver: ‘I think my favourite Casualty moment ever is the end of Series 31, episode 1 where Duffy, Josh and Charlie watch the team recover in the staff room from the trauma of the day and Josh says: “This place clings on because everyone works as a unit.” And Duffy replies: “Yet certain occasions call for certain people. Happy anniversary Charlie.” Then she gives him a kiss and a cup of tea. And Charlie smiles. It makes me cry every time I watch it. It’s beautifully understated yet incredibly moving. Only Casualty would end an epic episode with a cup of tea and a smile.’

Erika: ‘I have to agree with Ollie about the last moment in the Anniversary episode. It really does give you the DNA of the show in one, textually simple moment shared between the two characters who are absolutely at the heart of the show.’

Oliver: ‘There are so many other Casualty moments I love. Megan dying in Charlie’s arms; Jay chasing to the register office to try and stop Ruth marrying Edward; Lofty calling Louis to tell him his dad might be about to die; Sam falling over the balcony at the end of Series 13; Boiling Point; Max and Zoe’s doomed wedding; the episode set in a psych ward where Ruth finally admitted that she needed help and the “superhero” episode with Max, Lofty and Robyn. It’s a long, long list.’

Erika: ‘Zoe’s chaotic entrance in the mini in the storm. I loved her from that moment and that never changed. Lofty and Dylan’s goodbye scene. We all filled up on set when we were shooting it as it really was Lee’s [Mead] Golden Wrap with us. The whole crew were in bits. Ethan and Cal joyously running into the sea together after their mother has died and Ethan has forgiven Cal for hiding the Huntington’s diagnosis from him. It’s a great punch the air moment. Connie giving up Grace to Sam, admitting to herself that she couldn’t give her daughter what she needed. I love those brief moments when Connie’s mask slips, and this is my favourite.’

Buy the complete first season of Casualty on DVD on Amazon here.

What’s your favourite ever moment in Casualty? Let us know below…

Read more from Tobias on his blog.