It’s not all tuxedos and Savile Row suits for our 007. In his half-century onscreen James Bond has had the odd fashion faux-pas (clustered mostly around Roger Moore).

Will the upcoming 24th Bond flick feature anything as daring as a bell-bottomed safari suit or an inflatable puffer jacket? Almost definitely not, but it gives us an excuse to root through some of the outfits Bond would rather let die than live in… 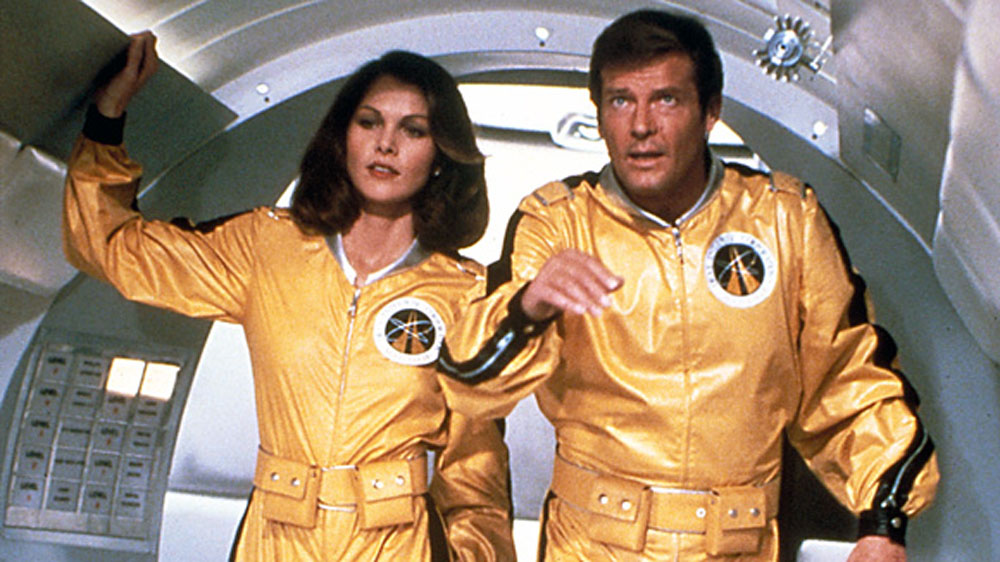 Nothing says ‘repopulating the human race at the whim of a man who looks like a shaved bear’ quite like dressing as a human prophylactic.

With only one colour – lemon meringue – to choose from in the Drax astro-loungewear range, you won’t have to worry about looking out of fashion as you float around in your jumpsuit. You will have to worry about trying to look even vaguely sexually attractive in it, however.

007’s been under many a bird in his life (ooh err missus!) but rarely looked so ludicrous as when he emerges from the water with a plastic gull atop his noggin. We can only assume he lost a bet with Q.

Will Daniel Craig ever sport a cormorant on his head? Unlikely. Which is a shame, as he really has the cheekbones to pull off a decorative sea fowl.

George Lazenby leaves a (skid)mark on the fashion landscape of the Bond films with his diarrhoea-coloured golf suit. A nightmare rendered in brown polyester [shudder], it’s completed by an orange polo neck.

The result is that Bond looks like he’s trying to disguise himself as a chair stolen from the student lounge at a ‘60s polytechnic. Yet he still manages to snag the sexy Tracy Di Vincenzo (Diana Rigg). Unbelievable.

Ski outfit (The Spy Who Loved Me)

Engaging in some post-coital gunplay as he races down a mountain slope, Bond’s the talk of the piste with this ‘yellow snow’ coloured ski-suit and contrast red hat and parachute pack.

He couldn’t be more visible to his attackers if he was in a jacket made of fireworks, but so what? Topped off with a strikingly patriotic Union Flag parachute, his is a look that says ‘To hell with fashion, I’m late for the fondue party back at the ski lodge’.

If Goldfinger taught us anything, it’s that defusing a nuclear weapon is serious business. As a covert clown, Roger Moore adds an air of slapstick to the tense bomb countdown scene, and it’s as appropriate as throwing a bucket of confetti at a funeral procession.

It’s a ridiculous moment, and when Bond’s already been dressed as a gorilla mere minutes beforehand, that’s saying something.