This morning I was wedged amongst the world’s press for the Monty Python press conference ahead of their 10 O2 shows which start tomorrow (1 July) and culminate with the final ever time the Python’s will be together on a stage on 20 July.

A promo of Mick Jagger and Charlie Watts kicked off proceedings, lampooning the idea of “a bunch of wrinkly old men trying to recapture their youth” commenting: “They’re still going? Who wants to see that again? It was funny in the Sixties, but…”

Hopefully that will also be used as part of the stage-show introduction since a got a great reaction from the assembled hacks. A filmed sneak preview of the final dress rehearsals demonstrated that this will be truly an all-singing-all-dancing show, almost more a musical revue, according to Eric Idle, who has been responsible for many of the musical interludes that the group are famous for, revealing that the running cost of the show itself was a slightly staggering £4.5 million.

The five remaining Pythons (John Cleese, Terry Jones, Terry Gilliam, Eric Idle and Michael Palin) were in ebullient mood as they fielded all sorts of (rather left-field) questions from such diverse countries as Brazil, Israel, Spain, Australia and Finland.

They hinted at the potential of guest artists waiting in the wings to join them at the O2 and, whilst cards were being held closely to their collective chests, Stephen Hawking (along with Brian Cox) was revealed to have some involvement on the night. 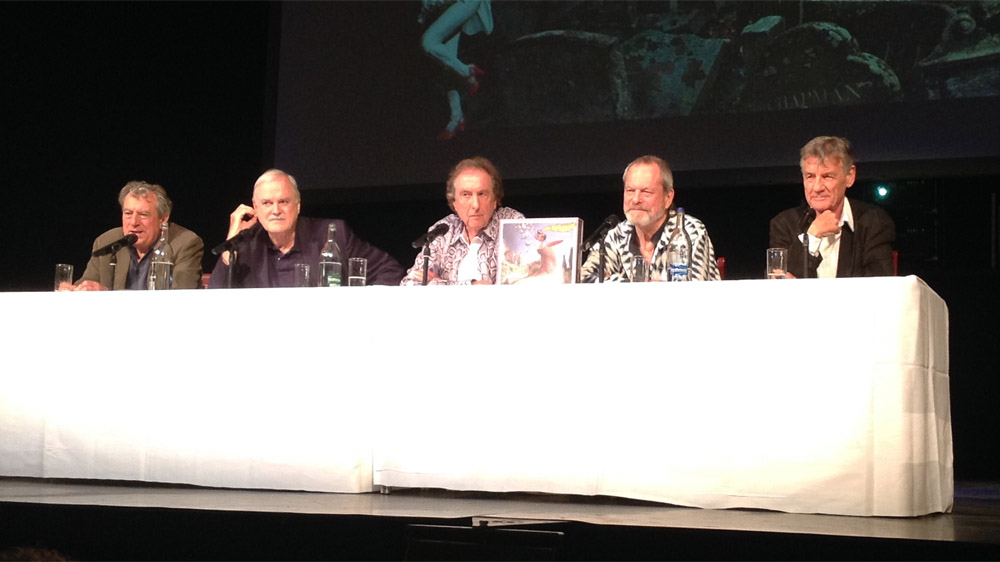 Much banter (chiefly led by Cleese) suggested that Cleese is no fan of Palin’s yawn-inducing travel shows and in retirement Cleese wishes to create an ITV show called “How Religion Fucked Things Up”. Any of the enmity which is mooted to exist within the group seems to be well and truly buried since part of the reason for regrouping was always levelled at Cleese’s legendary alimony payments.

The shows at the O2 culminate with a live simulcast to both worldwide cinemas and the UKTV channel Gold, and whilst there seemed to be a reliance in the footage of youthful dancers singing and dancing, hopefully there will be enough gas in the collective Python tank to see this comedy institution into retirement kicking and screaming.

– The Dead Parrot sketch, the Lumberjack song and The Spanish Inquisition will all feature.

– The 10 shows will play to more fans than the Glastonbury Festival did this past weekend.

– Eric Idle has enlisted choreographer Arlene Phillips and over 20 dancers to realise many of the more physical aspects of the show that “men in their 70s can’t do!”

Are you going to see the show? Let us know below…