Well, if there’s one thing we’ve learned tonight, it’s that the writers of Babylon certainly know how to leave us on a heck of a cliffhanger! Seriously, we have to wait how long for the next episode?!

Cliffhanger aside, there’s certainly a lot of excellent plotting on offer in this week’s finale. First of all, we never imagined that Banjo (Andrew Brooke)’s little bin-stamping tantrum would become a major plot point. Nor did we imagine such a crazy, high octane and tension filled resolution to the Matt/Robbie storyline! It’s certainly an episode that demands your utmost attention from the off, and hits the ground running very, very quickly.

As ever, the real meat of the episode is the ongoing office power-war between Charles Inglis (Paterson Joseph) and Sharon Franklin (Nicola Walker), as well as the continuing battle between Liz & Finn. Brit Marling is, as ever, on fine form here as Liz, especially in the moment when she realises she’s backed the wrong horse all along. Likewise, kudos to Bertie Carvel, who continues to play the self-serving and loathable Finn to the point of perfection, whilst also being allowed the chance this week to reveal some slight cracks in his cold exterior. Only slight, mind you. 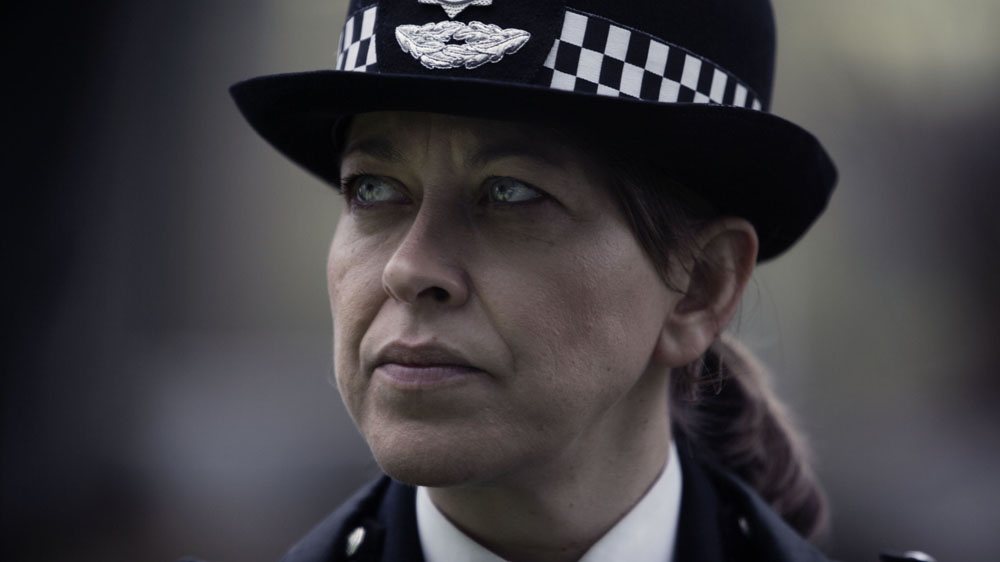 Paterson Joseph is the real star this week, delivering a brilliant, honest and stirring speech to the striking Firearms Officers, further highlighting the character’s two-faced and dangerous nature, but also giving his character the depth and compassion he’s lacked since his introduction. It’s a brilliant piece of writing, and Joseph performs it with a restrained gentleness whilst also giving it the gravitas it needs to convince.

Director Sally El Hosaini is on fine form once again, with the riot scenes certainly having the desired effect here. Reminiscent of the looting and rioting back in 2011, as well as the more recent riots in America this year, its powerful stuff – visually impressive for the sheer scale of the destruction alone, and terrifying to watch as our favourite characters are forced to combat it.

And yet, everything comes down to the shockingly leftfield cliffhanger – Tony betraying Robbie and Banjo to Liz, offering her Matt’s footage of Robbie drunkenly confessing to perverting the course of justice, all leading to Liz and Inglis showing the footage to a press conference, leaving us on tenterhooks as to whether it will save or further damage the integrity of the Metropolitan Police. It’s a great twist and a very real, very powerful moral dilemma, one which will certainly divide viewers much as it divided the main characters. It sets things up nicely for a potential second season, where no doubt, the repercussions will be strongly felt.

Easily the best episode of the run, packed with enough of the wit, drama and dark humour that made the show so watchable in the first place, Babylon certainly ends on a high this week, leaving just enough fallout in its week to make us desperate for that second season now!