Ross Poldark likes to think of himself as a man of the people. But here’s the 64,000 Shilling question Poldark poses to us this week: can Ross really trust ‘the people’?

Well, he can’t trust the viewing people. Half of them are watching Victoria on ITV. And before you start, that’s no bad thing at all – they’re both good, they’re both produced by Mammoth Screen, and in the catch-up age (and with Poldark already filming a third season) neither’s doing the other any harm. Frankly it’s nice to just have the choice of two popular dramas on a given evening.

What about Joe Public in the show? The future structural integrity of Ross’s neck depends on them, but they don’t have TVs so they’re out there, getting drunk, flinging horse shit at politicians, and having their honesty bought for a few pounds. It’s the Bodmin Friday Night Trifecta.

It’s no wonder Ross is looking worried as he sits in his cell. Warleggan has the jury in his pocket, and despite being magnificently wily Demelza can’t sway the judge’s mind. Against the backdrop of the political hustings, Ross looks like he’s about to become his very own human Swingometer. 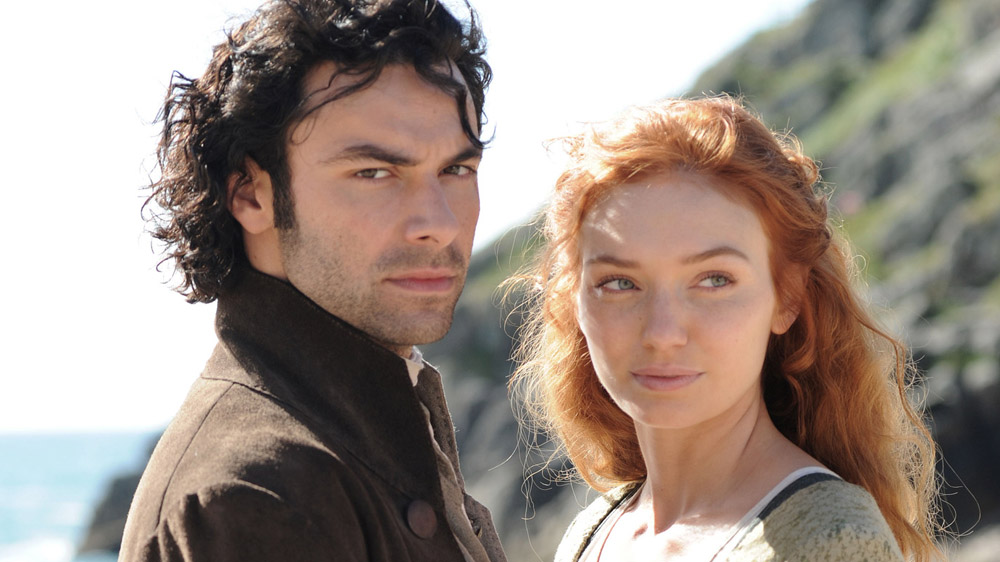 It’s ironic that a man who committed a crime to help the people is about to be shafted by those same people. One by one folk with various gradations of facial hair take to the stand to spin the same old 30 pieces of silver lie. All that is except good old Jud, who decides not to turn Judas and instead mumbles and slurs his way to the truth. It’s really quite sweet, like watching a drunk tortoise try to right itself after falling out of the pub and onto its shell.

We know Ross will be saved somehow. That, or with 8 episodes to go, we’re about to witness the most prolonged televised death sentence since Don’t Scare The Hare. But considering things are going to be sunshine n’ clifftop hugs eventually, the show does a good job of keeping us interested and anxious. As liars and besmirchers are pushed in front of us, the deck gets stacked so high against Ross that you wonder, not if, but how he’ll beat the odds.

He does it spectacularly, with a rousing, defiant speech of such passionate rhetoric that you can forgive Aidan Turner’s native accent for beginning to bite through on the odd vowel. I was convinced he was going to tear off his tunic as the defence reached its crescendo. Buttons and justice flying everywhere. Crucially it’s Ross’ faith in people, as well as his commitment to do good for them, that swings it for him and saves him from swinging. Unlike Warleggan, Poldark’s a man who sticks to his principles. It’s why we love him. Well it’s one of the reasons.

From one person who you knew would land on his feet, to another who you thought would be six feet under (if, like me, you haven’t read the books): Francis isn’t dead!

It’s par for the course to make fun of Francis, or at least to pity the man who stands in the shadow of his Men’s Health cousin, but Episode 2’s script and Kyle Soller’s performance does much to help us sympathise with him. He’s the guy that isn’t Ross. He’s Elizabeth’s wooden spoon. We know it, he knows it, and while it’s entertaining to see Ross fight to retain his place in the world, it’s arguably more compelling to watch Francis struggle to find his. Especially when he has a burgeoning bromance with Dr. Enys. He’s not the only one getting along with the good(looking) doctor. Dwight and Lady Caroline Penvenen continue to Hepburn & Tracy their way closer to each others undergarments. She’s a feisty one, that Lady Caroline, written with all the subtlety of a Carry On movie sound-effect. But who can blame her?

Enys is a smoking-hot MD, and her intended – Unwin Trevaunance – is so ineffectual as to be almost a homeopathic version of a human being. And he smells of horse poo. Hugh Skinner, who’s recently also been doing great work in BBC Three’s Fleabag, does utterly useless so utterly well that you’re practically urging Caroline to leave the puppet of a man and go get some passion on prescription.

Don’t stray too far though, Dr. Enys. We’ll need a physician at hand now that Demelza is pregnant. It’s just a shame Ross isn’t keen on having another Poldarkling after the trauma of losing their daughter. You can understand his position; the man doesn’t want to have to carry a shoebox-sized coffin again and we don’t want to watch it. But come on man, someone’s going to need to run that unprofitable mine when you’re gone.

With baby on the way, Warleggan plotting vengeful and romantic moves, and hints of panic about the French, by the end of Episode 2 you can just about see the topography of the season. The stakes seem higher, the shenanigans sexier, and Debbie Horsfield’s promise of ‘a rollercoaster ride’ assured.

It’s not a competition, but from what we’ve seen so far, Poldark deserves to rule the 9pm Sunday slot.