It’s November 1941, and it’s fourteen months after the Germans have won the Battle of Britain. Buckingham palace lies in ruins, Churchill’s been shot in front of a firing squad, swastika-emblazoned flags are draped over the nations landmarks. The bodies of Captain Mainwaring and the rest of the Home Guard of Walmington-on-Sea have all been bulldozed into a mass grave, along with anyone else who’s tried to defy the occupation.

It’s the stuff of classic sci-fi, alt-History and Jack Donaghy’s speculative fiction. It’s the ultimate historical hypothetical: what if the Nazis had won the war?

Well, in this adaptation of Len Deighton’s 1978 novel, they did. Now, having trumped the British, they’ve got their jackboots firmly under the table and are in control of every institution – from police to prostitutes – thanks to a pretty thorough ‘collaborate of be shot’ policy.

Even the stamps have Hitler’s face on them. Imagine having to lick Hitler every time you wanted to thank your aunt in York for the powdered egg and Woolton Pie she sent you at Christmas. Ugh.

In this newly-conquered green and unpleasant land we’re swiftly introduced to Inspector Douglas Archer (Sam Riley) of Schottland Yard: a chap with his hat perpetually cocked at sexy o’ clock and utilising a voice so unnaturally growly (think your best Tom Hardy in Taboo impression after a carton of cigs) that it kept making me clear my throat as I watched. Riley is trying to fill the boots of a character you’d have like to have been played by Humphrey Bogart, were Bogey not already doing his bit in Northern Morocco. He just about gets away with it too.

Archer is a man who at first seems comfortable enough under Nazi rule, given his position and ability to exploit it, but as the first episode progresses it’s soon apparent that he’s not collaborating so much as just trying to get by. He doesn’t like taking orders in German but he has reasons – other than not wanting to be shot in the head – to keep doing so.

As Scotland Yard’s most handsome man, he investigates a murder which leaves behind a corpse so unusual that Berlin wants parts of it bagged and Parce-Heil-Forced over to them (easier that way – otherwise think of all the Hitlers that’d have to be licked). In fact it’s a killing that seems so important that they send over SS officer Oskar Huth (Lars Eidinger), a man who’s less Herr Flick and more utter prick. Well, you’d expect nothing less from a Nazi.

A murder’s our way into this world, and Episode 1 plays like a crime drama set in some parallel universe, but there’s more to it than that. Enough to bring down the Nazi regime in Britain? You’d have to read the book to find out, but writers Neal Purvis & Robert Wade (responsible for penning four good Bond films and Die Another Day) have so far made a great job of adapting it. 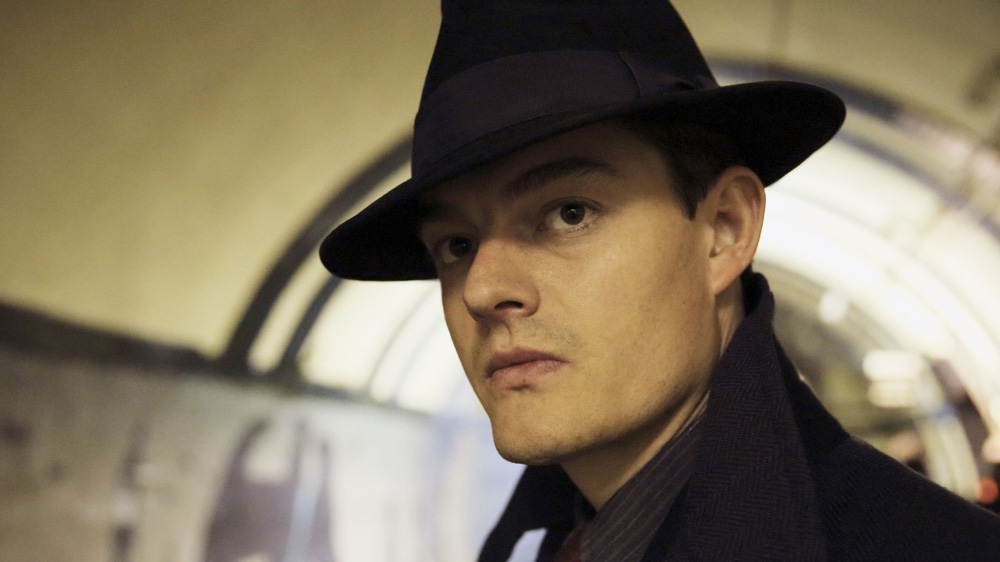 SS-GB feels like a noirish 1940s film decanted into five parts. Perhaps that’s why I mentioned Bogey earlier. It’s not as dynamic as some might expect from a drama based on Nazi occupation, but don’t confuse that with boring.

From moment one the show sets up a febrile atmosphere, and crucially it doesn’t waste any time sensationalising the premise of ‘NAZIS!’ and quickly gets down to the dreadful nuts and bolts of living under an oppressive regime that’s good at red tape and evil.

Down to earth, powered by personal motivation, and tense in that street-level, looking-over-your-shoulder sort of way, SS-GB more closely resembles Toby Whithouse’s under-appreciated 2015 drama The Game than it does that other ‘What if Nazis…?!’ drama, The Man in the High Tower. And that is no bad thing at all.