Into the Storm is, in many ways, a film that feels overdue.

For years now it seems that every time you turn on the news, Mother Nature is battering some corner of the Earth, be it hurricanes in the U.S., typhoons in the Pacific or earthquakes and tsunamis in Japan. The footage that news reports show of these events are chilling and mind-boggling in scale – all the more hard-hitting for the fact that we know they’re real.

So it seems inevitable that Hollywood would eventually attempt to play on this, and while there have been forays into this territory – The Impossible taking it realistic, Godzilla riffing on it via giant monsters – Into the Storm is the most overtly Hollywood take on extreme weather in quite some time. It’s Twister: 2014. And it’s an entirely mixed bag.

The plot follows several groups, all of whom relay their accounts of the storm via their own personal cameras (so yes, this puts us firmly in the waning ‘found-footage’ sub-genre). We have our central family, brothers Donnie and Trey (Max Deaxon and Nathan Kress), who are filming time-capsule videos for the future, at the request of their cold father and Vice-principal Gary Morris (Spooks star Richard Armitage).

The other main group is a team of documentary makers and storm-chasers, led by Matt Walsh’s zealous weather-nut and Sarah Wayne-Callies’ more reasonable meteorologist. There are also a few YouTube daredevils thrown in for (patchy) comic-relief.

The principal issue with Into the Storm is the script’s wild inconsistency. A few of the emotional beats land perfectly, and are supremely effective, but others feel awfully forced and manufactured. It’s a script that feels like it was written by two different people – one who’s entirely capable of telling a story, and one who’s totally unfamiliar with human emotions and dialogue.

John Swetnam, for it is he and he alone who wrote the script, also seems unsure as to the tone the movie should take. Is it tongue in cheek or not? The best material goes to the Morris family, whose relationship with each other grows believably throughout the film.

The decision to make the film found-footage/documentary style is also questionable. A film using that gimmick is only as effective as it is committed to it, but Into the Storm only intermittently plays by the rules it’s established (shots that no camera could have taken, a cinematic score on top). It fails to commit, and that leaves you wondering why they bothered.

There’s also the fact that the science at work here seems entirely shaky, even to a layman. (Would a previously rampaging tornado really stop and pose for the cameras just because it took on fire and looked pretty?) 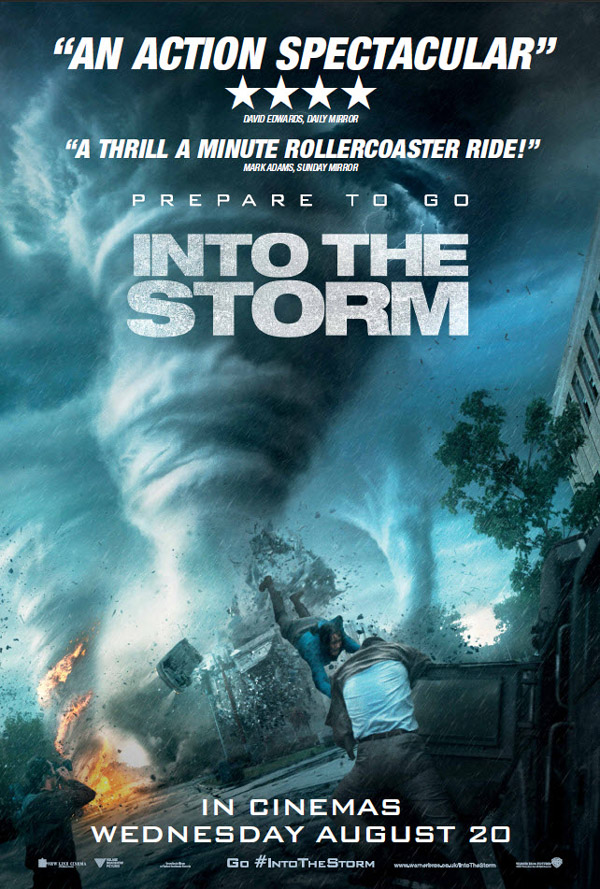 Having said that, one thing that cannot be faulted with Into the Storm are the special effects, which are faultless throughout. The storm/s are undeniably powerful, and the destruction they wring is genuinely impressive, and made all the more affecting for what we’ve seen in the news – although even with a hefty Hollywood budget, nothing can really compare to the raw power of genuine news footage.

Into the Storm is, despite its faults, a fair amount of fun. You just can’t take it too seriously. The action sequences are well-staged, and the effective sound-design helps convey the sheer force of nature on screen.

As disaster-porn goes, you won’t see many more impressive sequences of destruction than these. It’s just a shame that, unlike the titular storm, the film never manages to combine its greatest aspects into a more powerful whole. But if you choose to see it, see it big, and see it loud, and there’s fun to be had.

What did you think of Into the Storm? Let us know below…