It’s become something of a clichéd line regarding the Wachowski siblings’ film output of late, in that people “admire the ambition”, but find the films to be flawed overall.

Well, things usually become clichés for a reason, and while there is – yes – plenty to admire about Jupiter Ascending; it is also a bit of a mess.

The plot follows Mila Kunis’s humble maid; the titular Jupiter. She’s a girl who dreams that there’s more to life, and when a team of alien assassins come after her, she finds that there is – namely the minor notion that she’s actually the reincarnated matriarch of an intergalactic royal family, and that she actually owns the Earth, as well as half of the rest of the galaxy.

She finds a guide and protector amid these crazy revelations in the shape of Channing Tatum’s Caine, a man spliced with wolf-DNA, who used to serve in the space military, until he was dishonourably discharged and had his wings severed, leaving him to now zip around the galaxy on flying space-boots as a bounty hunter.

If you made it through that paragraph, then well done – you might be able to make it through Jupiter Ascending. 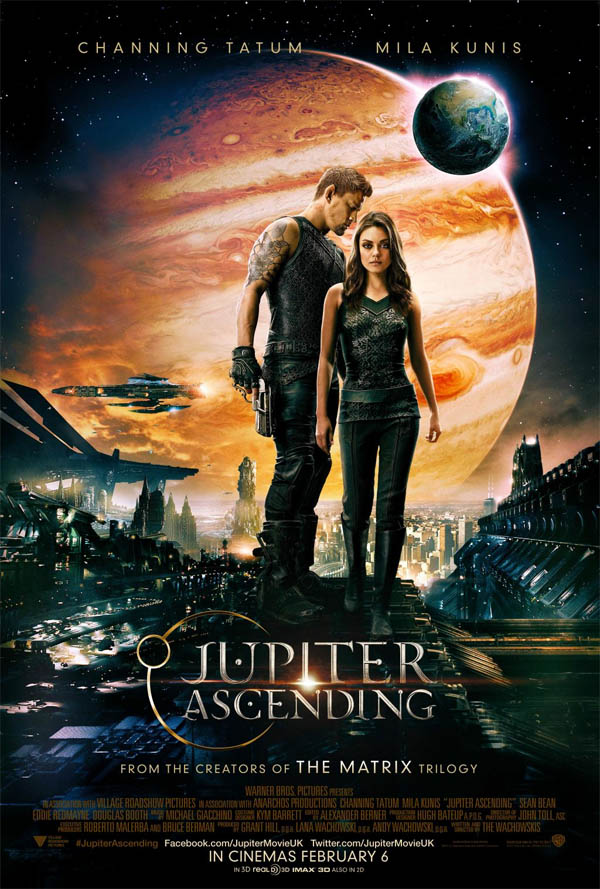 The whole film, an original creation from the Wachowskis, is a particularly virulent strain of nonsense. That’s not necessarily a bad thing. Nonsense can be great fun, and the level of invention here is impressive: the sheer will to include seemingly anything and everything that came out in the storyboarding sessions is – that word again – admirable.

Less admirable, unfortunately, is how it all works as a film.

For a start, Mila Kunis is miscast. She’s buffeted around the movie, and the galaxy, with little agency, relying on big, manly Caine to get her through safely. Kunis never convinces, and if Channing Tatum is, in theory, a perfect fit for a charismatic alien bounty hunter, here he’s curiously blank throughout, forgetting to be charming, or even to emote, for the most part. As for the budding “romance” between the pair, forget about it: it’s unintentionally hilarious.

The script fares little better, but does have moments to enjoy, such as whacky asides that explain everything from dinosaurs to vampire, as well as some gleefully stupid lines about bees that should become as memorable as The Wicker Man remake’s use of the same animal.

But for a film with such brazen absurdity throughout, the script really ought to be more fun. Nobody in the film is given much of a character, and lots of bit-part players flit in and out, being discarded or forgotten almost as soon as they’re introduced.

On the better side of things, Sean Bean is reliably gruff as the bee-spliced Stinger (yes, really – he’s half bee and his name is Stinger), while Eddie Redmayne hams it up as the film’s principal villain, speaking in a curious hushed whisper throughout, quietly chewing the scenery like a sinister panda plotting your murder over a piece of bamboo.

And there are, as mentioned, things to admire. There are some cool action sequences, with the initial assault on Chicago being particularly great, even if Tatum on Ice is again unintentionally hilarious. But the visuals, the art design, the imagination and invention are incredible throughout.

The film is bursting at the seams with little touches, tiny details that are entirely superfluous, but that help flesh out this sprawling galactic universe wonderfully well. The spaceships are, without exception, stunning to behold. Visually, at least, if you’re going to bring a space opera to the big screen, this is how you do it.

Jupiter Ascending is a triumph of design, but not much else. Despite the sometimes exciting action and the living-breathing world, the Wachowskis have created a hollow, soulless experience.

It’s like watching fireworks, or a confetti cannon explode – it looks spectacular, makes all the right noises, but has very little substance, and under the slightest scrutiny it crumples into insignificance. But boy, those sure are some pretty spaceships…