Clueless quartet Stu (Ed Helms), Phil (Bradley Cooper), Alan (Zach Galifianakis) and Doug (Justin Bartha) find themselves in hot water once again when a trip to help Alan get over his father’s death goes pear-shaped. Or rather, Mr Chow-shaped.

What sets The Hangover Part III apart from its 2009 predecessor is that it feels like a different film entirely. While The Hangover Part II sought to crudely cash in on what made The Hangover such a hit by having someone go missing the night before the wedding (but in Bangkok), the third instalment goes one step further and doesn’t actually involve an alcohol-induced hangover at all. There is a hangover of sorts, but it is one dating back to the first film. We won’t give away the details of that here, but it is a nice tie-in.

Setting the main action in Las Vegas where it all began keeps the film grounded in reality, and reinforces the idea that the Wolfpack have come full circle. What The Hangover Part III does well is that despite the outlandish plot, it is believable. Ultimately, Stu, Alan and Phil are just regular guys in a bad situation, and the three male leads pull this off with aplomb: the reactions of the characters to seeing a man get shot and killed borders on poignant. 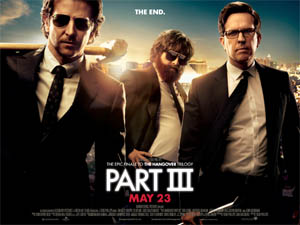 Pushing surprise hit character Mr Chow to the forefront for a second time was a good move. Community star Ken Jeong is in his element in this role and provides much of the film’s laughs, whether gross-out (he eats dog food at one point) or at his expense (Asian stereotyping alert!).

Galifianakis is on top form as the overgrown child Alan, continuing to prove he is one of the best comic actors out there today; and while you’d be forgiven for thinking Helms’ uptight, neurotic schtick could get old quickly, he digs out something fresh and funny every time. Unfortunately, he is playing second fiddle to the now Oscar-nominated Cooper and his much less interesting character Phil.

There are plenty of knowing nods to the previous two films throughout, including a reference to Stu’s tattoo from Part II and the reappearance of “Black Doug”. Plus, the ending features a montage that Hangover fans will love, although it does send the film into incredibly schmaltzy territory.

At its core Part III is a coming-of-middle-age yarn about adult male friendships; and the message it gives (somewhat diluted by the sting during the end credits) is that growing up doesn’t have to be synonymous with growing apart. Director and writer Todd Phillips should be proud of what he has achieved with this franchise, which is easily one of the most original and entertaining comedies in recent memory.

> Buy The Hangover Part III on DVD on Amazon.

> Buy The Hangover Parts I and II boxset on Amazon.

What did you think of Part III? Let us know below…