The Martian opens with a shot of the vast, empty expanse of space, and for anyone with a passing familiarity with cinema, it’ll be instantly evocative of Ridley Scott’s sci-fi/horror classic Alien.

Even the way film’s title text lingers slightly on screen is a very deliberate call-back to the iconic opening moments of that 1979 film.

But that’s where the similarity ends.

The cheeky nod-and-wink opening perfectly sets the stall out for The Martian, which is as far removed from Scott’s previous forays into sci-fi as can be. It might not sound it from the premise, but The Martian is actually a comedy.

Matt Damon’s Mark Watney is part of a manned mission to Mars, which goes wrong when an unexpectedly severe storm threatens their spaceship, the Hermes.

As such, the group calls time on the mission early, and returns to the ship to take off. Unfortunately, Watney is killed in the ensuing escape, his body lost to the storm. Only… some hours later, with his team already embarked on the long return journey to Earth, Mark Watney wakes up.

Trapped on Mars with no means of escape or contacting anyone, Watney takes stock of his situation and makes the gloriously stubborn decision that despite everything, he will not die on Mars. He will survive. What comes next is a wonderfully inspiring two-hour celebration of science, resourcefulness and humanity as Watney tries to figure out a way to live.

On the surface, it sounds like The Martian should be a spiritual companion piece to films like Gravity or Moon, but it’s really nothing like them. Ridley Scott plays the whole thing with tongue very much in cheek, as evidenced in the casting of recognised comedians Kristen Wiig and Donald Glover in roles back on Earth.

Even the moments that might be serious – Watney accidentally blowing himself up, say – are somewhat played for laughs. The film shares its lead character’s sense of good-humoured optimism in the face of mind-boggling adversity, and the film will leave you beaming.

But just because the script, based on Andy Weir’s best-selling novel, plays it light and breezy, doesn’t mean that the film is lightweight. The gravity of Watney’s situation is keenly felt, and at no point does the film’s tone undermine the seriousness of his predicament.

Watney may keep his chin up, but the physical and mental effects of long isolation on an alien world, years from help, is not ignored.

When he does eventually make contact with Earth, Watney effectively becomes something between a YouTube vlogger and a reality TV star, recording his efforts to survive and beaming them back home, both for posterity and to stave off madness, to the global fascination of those back home.

Mark Watney is a perfect role for Matt Damon, who’s always had great comic timing alongside his more recognised acting chops, and his charismatic performance is engaging throughout. Whether he’s trying to ration out his dwindling food supplies, doing chemistry to create a water supply, or posing for the first Martian selfie, Damon is superb.

Back on Earth, Jeff Daniels’ head of NASA and Sean Bean’s mission leader butt heads over how to handle the publicity nightmare of having left a man on Mars – and whether to tell the crew of the Hermes or not – while Chiwetel Ejiofor and Benedict Wong set about trying to science up the impossible in their own way in an attempt to bring Watney home. Unlike the stranded astronaut, at least they have the entirety of NASA to play with. 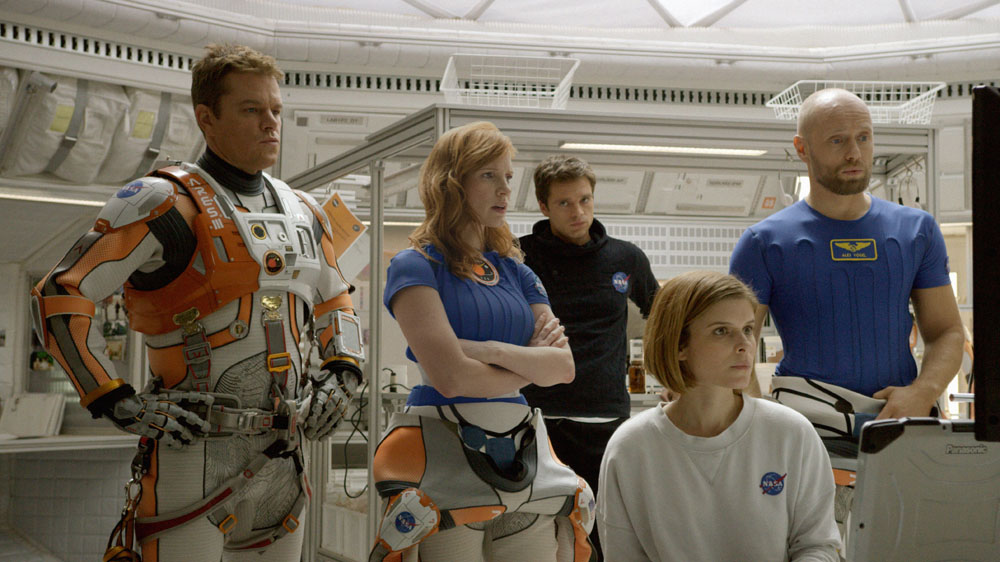 The Martian is a film that’s tailor-made for science nerds – the kind who were probably glued to NASA’s recent announcement that they’ve discovered water on Mars – but remains wonderfully accessible to everyone.

The film was made with NASA’s assistance, and all the science on display was accurate at the time the film was made. That knowledge lends the film an authenticity that makes you think it should come with a ‘based on true events’ precursor. It all plays out so plausibly that it’s easy to forget that we’ve never actually sent anyone to Mars.

While many films utilise science, few do so with panache and obvious affection for scientists and the miracles they concoct. The effects of gravity, relativity, etc, are all present and correct, but the jargon never bogs things down.

Anything complex is explained in typical and knowing cinematic style, using e.g. salt and pepper shakers as visual aids, while those who understand the science aspects already will simply be giddy at all the authentic nerd fuel on display. It’s win win.

The film has managed to make what in reality would be impressive but rather boring science seem gloriously entertaining – and much of the credit must go to the film’s writer Drew Goddard, and in particular, Andy Weir, who wrote the original novel.

Visually, as you might expect from Sir Ridley, the film is gorgeous. The CGI is flawless, and again, at times it’s difficult to believe that this wasn’t actually filmed on Mars. The soundtrack is also marvellously anachronistic, with Watney chafing against a series of 1970s disco classics; the only musical options left behind by his departed crew. 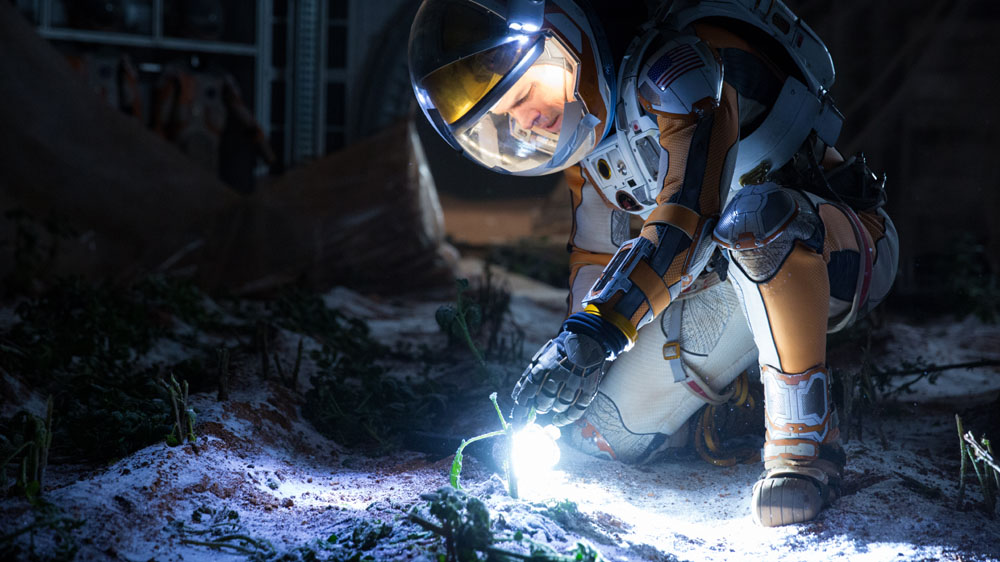 The Martian is, in many ways, the polar opposite to Ridley Scott’s Prometheus.

Visually, while the storm that bothers the Prometheus is virtually indistinguishable to that which troubles the Hermes, the grimness of the planet in Prometheus is in stark contrast to the red hues of Mars. Tonally, too, the two are contrasting pictures.

While Prometheus was concerned with darker and heavier questions of philosophy, religion and the nature of existence, The Martian stands in the light, and favours science and good-humoured optimism in the face of adversity.

This is the one of the least po-faced science fiction films you’ll ever see, and it’s certainly the most entertaining Ridley Scott has been in many a year. It’s great to see the old master cut loose and have a little fun.

The Martian is triumphantly entertaining on almost every level, its two-hour plus run time absolutely flying by. The film’s inspiring spirit and unashamedly nerdy character are entirely endearing, and the story is one that can’t help but capture the imagination. A winning performance by Matt Damon seals the deal.

A glorious celebration of science and ingenuity, The Martian is accessible, awe-inspiring and heroically enjoyable.

> Buy The Martian on DVD on Amazon.