To celebrate the releases on Monday 23 November, we’ve got sets of all four DVDs to give away to five of our Twitter followers! 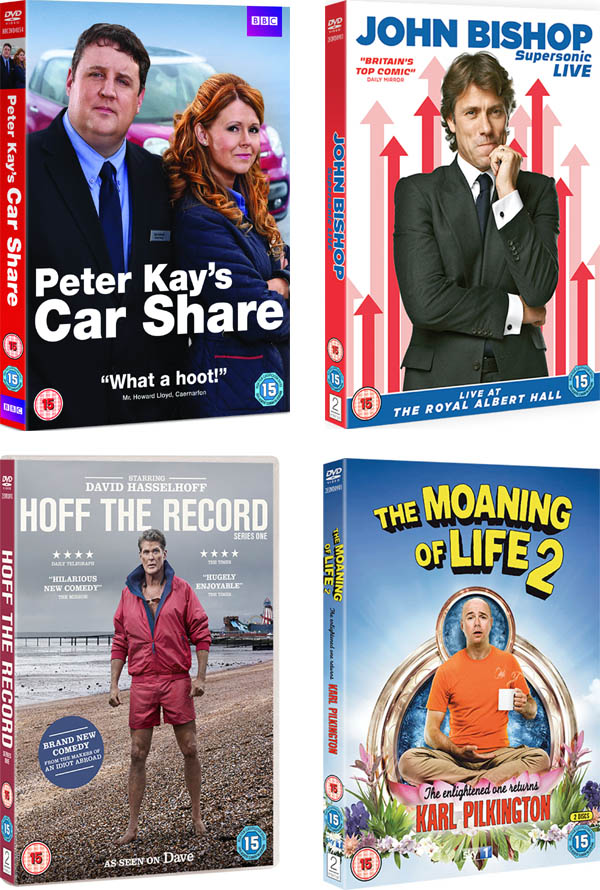 Win! Follow @CultBoxTV and RT for a chance to win one of five bundles of 4 new comedy DVDs – https://t.co/37qAq0n3JN pic.twitter.com/Btz50XBAhb

Shot in the style of a documentary, the semi-improvised comedy Hoff The Record follows TV legend David Hasselhoff – playing a highly fictionalised version of himself – as he arrives in the UK in an attempt to reignite his flagging career. It’s been thirty years since he rose to worldwide fame in Baywatch and Knight Rider and things have since gone a little stale for The Hoff. Will a move across the Atlantic change his luck?

John Redmond (Peter Kay) and Kayleigh Kitson (Sian Gibson) have been thrown together in a company car share scheme, forcing their paths to cross. Each trip brings fresh insight into John and Kayleigh’s lives, with twists and turns in their unlikely relationship.

John Bishop’s back! After taking time out to write his autobiography, John limbered up again for his third sell-out national Arena tour, ending with a special one-off show at London’s iconic Royal Albert Hall. This latest comedy caper by the immensely talented John Bishop was described as “the funniest two hours you’ll have anywhere, anytime soon” by The Daily Mirror.

Season 2 of Karl Pilkington’s The Moaning of Life

Pack your case for another trip as Karl Pilkington experiences more of the world’s most magnificent destinations. Following his discoveries in the hilarious first series, this modern day philosopher is now turning his attention to some of life’s other big issues, embarking on an epic trip that takes him from the arctic conditions of Iceland to rural India, Mexico, Germany, across America and to the metropolis of Tokyo. The An Idiot Abroad star moans his way through a whole new series of weird and wacky experiences.

This competition has now closed. The winners are Ruth Manthorpe from London, Thomas Drummond from York, Sam Tipper from Kingston, Molly Patterson from Inverness and Jeni Reed from Birmingham.