To celebrate the release of Nina Conti Live: Dolly Mixtures and Jon Richardson: Nidiot Live – out now on DVD and Digital Download courtesy of Universal Pictures (UK) – we’ve got sets of both DVDs to give away to three of our Twitter followers! 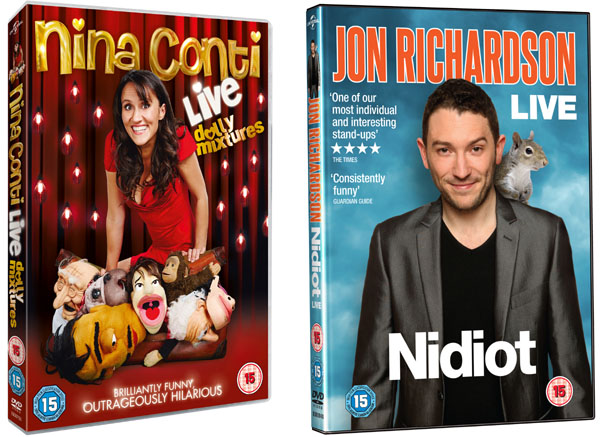 Get ready for gut-busting laughs as Nina puts the audience at the centre of the action in hilarious situations, all with the help of her side-splitting puppets. Enter her long standing, partner in crime Monkey,  plus her new ‘family and friends’ – Killer (the dog), Nina’s mini me ‘Daughter’, Granny and her husband John, full size body puppet Polish builder, Stefan and Nina’s famous face, Mask. This outrageously hilarious DVD also includes over 40 minutes of exclusive extras set to make you and your loved ones crack-up this Christmas.

Nina Conti Live: Dolly Mixtures is available to own on DVD on 24th November 2014 and available on Digital Download now courtesy of Universal Pictures (UK).

Nidiot sees a more contemplative side of perennial singleton and OCD sufferer Jon.  As he approaches 30, Jon is determined to become a more easy going person for the sake of his friends and his future health as he starts to think about life ahead.  His difficulty in meeting women (especially someone he really likes), the trauma of seeing his friends settling down and having children, or risking his life in a daredevil situation but then finding himself actually having a good time. Can a leopard (or indeed a NIDIOT) change his spots for the better?

Jon Richardson: Nidiot Live is available to own on DVD and Blu-ray out 1st December, released by Universal Pictures (UK). Also available on digital download.

This competition has now closed. The winners are Tim O’Connell from Chigwell, Claire Ball from Salford and Harriet Watson from Sheffield.