To celebrate the release of From up on Poppy Hill on DVD and Blu-ray, we’ve picked out our five favourite Studio Ghibli food scenes…

That’s right, HAM! Not much a food scene this one but it is damn cute. Whilst still a young thing, and still transforming into a human, Ponyo tastes the delights of human ham. Well, not human ham, but ham that humans enjoy. And this becomes her favourite word. As she grows, Ponyo is given HAM! by her new family and her excitement is tangible as screams “It’s haaaaaammmmm!” on its presentation. Please note: Ham is not that exciting.

4. Fried egg bread in Laputa: Castle in the Sky

Here, in a rather touching scene after an immensely pleasing and eye-popping train chase, the youngsters Sheeta and Pazu, who’ve just met, take a breather to each enjoy half a fried egg on a substantial slice of bread (more from eggs later, egg fans!). Sheeta shares her life story and the details of her kidnapping over the meal with Pazu and then enjoys a “green apple and some candy” for dessert – setting them up for a journey of amulets, flying islands, airships and an adorably gargantuan, though slightly dilapidated, robot.

3. Greedy parents in Spirited Away

Take that parents, you’re swine! No, really! Yup, Chihiro’s mother and father’s lust for food, or rather free food (despite his claim to have a credit card), got the better of them as they were slowly transformed into pigs, beaten and trapped in a pen. Not one of Ghibli’s more subtle messages but the moment is most definitely a shocker, particularly for their daughter who is slowly learning that this beautiful and fascinating place she has just discovered is full of threat and terror. Younger viewers look away…

One of Miyazaki’s greatest creations, and hand drawn by the man himself, Calcifer is a Fire Demon who is the very beating heart of Howl’s titular moving castle. Once Sophie had begun her cleaning she bonded with the little hothead by feeding him eggs (and their shells!) before settling down to a proper breakfast (a sort of American/European hybrid breakfast) with wizard-in-training Markl and their master Howl.

1. The Breakfast Song in From up on Poppy Hill

Ghibli’s offering from earlier this year wasted no time in getting stuck, both figuratively and literally, into the food. And, as usual, eggs take a front seat in proceedings that, according to the lyrics of the song (which takes the unusual route of describing exactly how to make breakfast and extolling its virtues), are “slippery” while the tofu is “jiggly”. Beautifully sung by Aoi Teshima, the Breakfast Song takes Ghibli’s love of food onscreen and accentuates it with its equal love of music. Bon appetit. 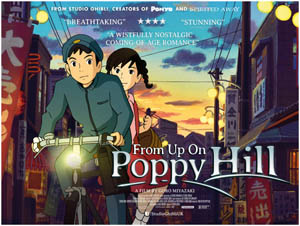 Set in Yokohama in the year 1963, From Up On Poppy Hill is a love story whose main characters are the high school students who were to become the first generation of a new Japan. As the country begins to pick itself up from the devastation of the Second World War, the new generation struggles with moving forward into a prosperous future while trying not to lose the things from the past that make them who they are.

Watch the trailer for From up on Poppy Hill…