It’s been over 15 years since arguably the most iconic monster in cinema history made an appearance on the big screen.

But the less said about Roland Emmerich’s big budget attempt to drag the mutated giant lizard into the present day, the better – it was a near total failure, and doesn’t hold up well at all.

Enter British up-and-comer Gareth Edwards, the man who made supremely effective creature-feature Monsters on a budget of about £3.50 and some double-sided sticky-tape, and who has now been entrusted with a somewhat bigger task in taking on the Godzilla property.

Edwards’ monster-based credentials were firmly established with his first feature, so Warner Brothers have thrown him a heftier war-chest and let him loose on the biggest monster of them all…

CultBox were recently invited along to a world-exclusive preview of some finished footage from the film, introduced by Gareth Edwards himself.

The first scenes we’re shown focus on Bryan Cranston as a man working at a Nuclear Power Plant in Japan, struggling to make sense of some curious phenomena. Things spiral rapidly out of control and Cranston is given ample opportunity to remind us why he’s arguably the best actor in the world at present. Seeing barely five minutes of isolated footage, we’re totally invested in his character.

The next scene jumps forward, as Cranston is attempting to convince the authorities what he thinks might be coming, followed by a scene in which… it arrives.

The spectacle here really is something else. The sheer scale of the thing is staggering. Cloverfield and Pacific Rim were big, but this might just top them both, and the CGI – as you’d expect, with Edwards being a former VFX man – is flawless.

Godzilla himself has a far more traditional look than the Emmerich version, and he’s pleasingly, horrifyingly large; he’s not just tall, he’s dense. Truly massive – emphasis on mass. When we’re given our first real look at him, it feels like seeing the T-Rex roar in Jurassic Park for the first time: it’ll send shivers down your spine.

A later scene shows Kick-Ass star Aaron Taylor-Johnson – another Brit in a Brit-centric production that also features Sally Hawkins – and his soldier pals on a high bridge, attempting to stay quiet and not draw the wrath of the beast. The sequence is so tense that you won’t want to make a noise, even sat in the audience! You will hold your breath.

The final scene we’re shown is the HALO paratrooper jump that you may have seen in the trailer; it’s haunting, beautiful and, in the true sense of the word, awesome. The sound design throughout the footage is masterful, never more so than in this soon-to-be-iconic moment. 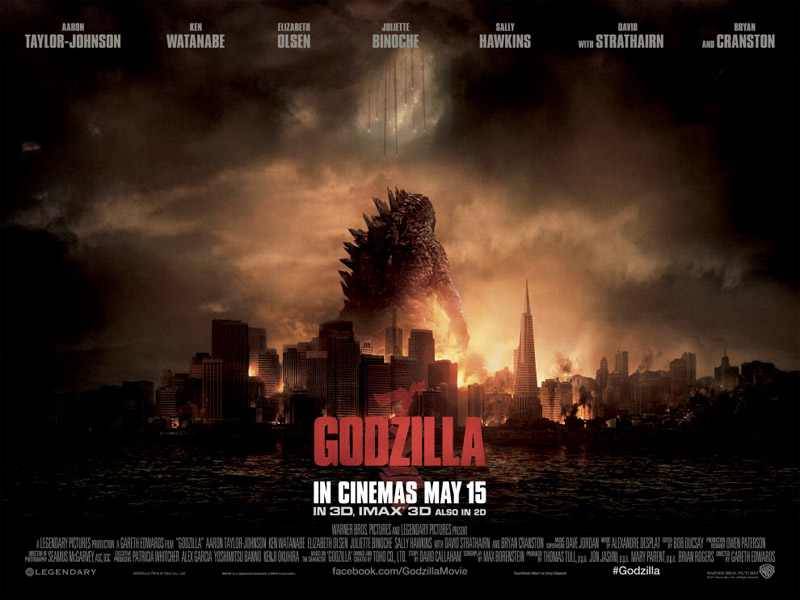 After we’d caught our breath and picked our jaws up off the floor, Edwards answered a few questions from the audience…

What story did you want to tell with your movie?

“Very much at the heart of it is man vs. nature, and that if you mess with nature, you’re going to lose. For a long time we’ve been the alpha predator, but Godzilla takes that assumption away. We opened the Pandora’s Box. Godzilla is very much about putting nature back in balance.”

And who’s responsible for that incredible sound-design?

“Erik Aadhal is our sound designer. He has a really broad spectrum of work – he does Transformers with Michael Bay and Tree of Life with Terrence Malick. So his range is fantastic and it’s kind of what we’re aspiring to with this. It’s obviously this massive, epic movie, but we want it to have heart and soul, and subtlety and a bit of artistic merit.”

Were you influenced by Japanese anime and manga cartoons at all?

“I don’t know if it comes across at all, but one of the main designers on the film became a good friend, and we always used to say to each other when we got stuck designing things was… “What would Akira do?” So it was definitely an influence, yeah.”

How important were the performances and human characters?

“It’s really important! It’s very easy to get seduced by CGI. My background is VFX, after all. So this is about the story and creating characters that you genuinely care about.”

How did you come to assemble such an incredible cast?

“As you’re writing a screenplay you can’t help but picture actors in these roles, but you shouldn’t, because you usually can’t get them. We had this little wish-list… and it’s amazing how many people are closet Godzilla fans!”

What was it like working with man of the moment Bryan Cranston?

“He’s annoyingly the funniest man you’ll ever meet.  He’ll go from tearful and crying and then just say the funniest thing you’ve ever heard and have everyone in stitches, and then be like ‘okay, second take’ and go back to crying again. It’s amazing to see. It’s no fluke, the position he’s in.”

How difficult was it to get the look of Godzilla himself right?

“We wanted him tall enough that you can see him wherever you were in a city, but small enough that he can still be obscured sometimes, otherwise there’s no fun. We ran through loads of options, but it was quite clear that about the 350ft mark was right… especially because that would technically make him the biggest Godzilla ever!”

How different an experience was it working with such a massive budget?

“If you wrote a list of all the pros and cons of making a low budget movie, for making a high budget movie just swap them over. Everything that is easy to do when there’s just three of you is really hard when there’s three hundred. Everything that’s hard to do when you’ve only got £10 is easy when you have millions. The hardest thing in any filmmaking process is to tell a gripping story that you care about the outcome of. And that doesn’t matter if you’ve got 10p or £200million, it’s just as hard for everyone. And that’s what we spent our time trying to get right.”

By the look of the footage shown, Gareth Edwards and his team have nailed it; a film full of spectacle, which also features plenty of evocative quieter moments. The scenes of destruction – a tsunami, a meltdown in a power-plant – are all hugely relevant to things we’ve seen happen in the real world in recent years, adding extra pathos to the film.

Everything we’re shown is awesome, but you get the real sense that there’s story and character here: Godzilla has a point beyond a sheer CGI-fest. Think Pacific Rim with brains. There’s art here. And we can’t wait to see the rest of it!