Barry Nelson may have technically got there first, but we all know that 007 really started when Sean Connery put on that suit, lit that cigarette and introduced himself to the world with that immortal line.

Dr. No is where our Bond obsession began and what’s truly remarkable is that pretty much everything we know and love and James Bond was present and correct from the word go.

It all starts innocently enough with the disappearance of two relatively low level operatives in Jamaica. But once Bond is sent to investigate, with the help of his CIA equivalent Felix Leiter, things take a turn for the classically megalomaniacal.

The mysterious Dr. No has installed himself on a private island with plans to disrupt American rocket launches, is rumoured to be guarded by his very own dragon, and is determined that nobody will get in his way.

We all have a soft spot for one incarnation of James Bond, usually the one we grew up with, but nobody can deny the Sean Connery is the standard bearer. He’s young, he’s handsome and he’s pretty much a thug with a gun who looks damn fine in a suit. Luckily, that’s all we require at this early stage.

As with Sean Connery, Jack Lord is technically the second Felix Leiter, even if 1954’s incarnation was called Clarence for some reason. He’s not given an awful lot to do this time round, but he does sport a killer pair of cat’s-eye sunglasses.

Gruff, stern and uninterested in any of Bond’s antics, Bernard Lee’s portrayal of M is so iconic that the character hasn’t really changed in 50 years. 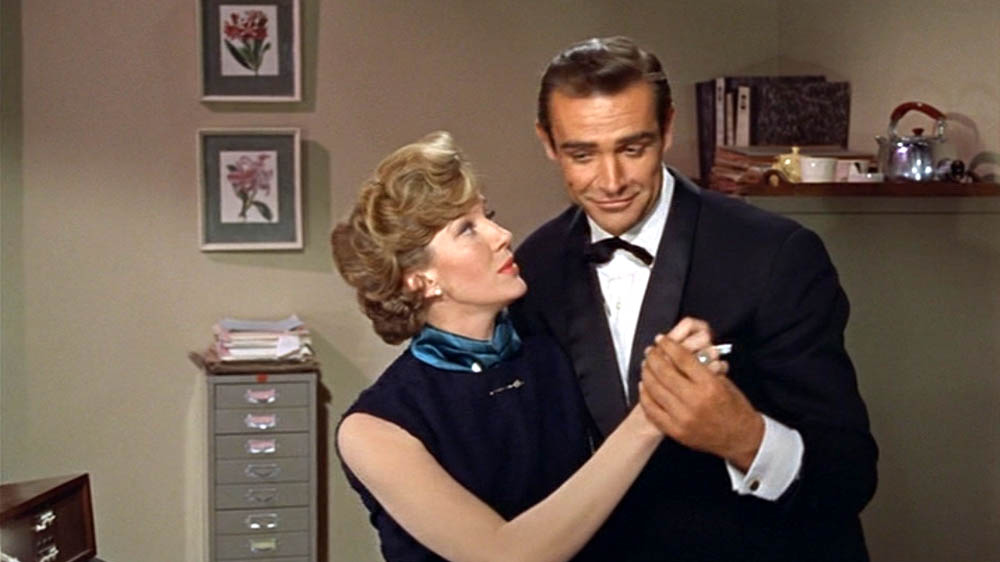 Of all the characters that have been played by multiple actors, Miss Moneypenny is the one that arguably has never been topped. Lois Maxwell’s original Miss Moneypenny strikes just the perfect balance of flirtation and propriety. These new pretenders come and go, but when perfection is reached first time around there’s not much you can do. Their relationship can be summed up perfectly with her line: ‘Flattery will get you nowhere – but don’t stop trying.’

Handy with a knife and good with a boat, John Kitzmiller does well with an underwritten role that falls apart once Quarrel has to fall prey to ‘native superstition’ and when Bond barks ‘fetch my shoes’ as he runs off with the girl. It may have been the ‘60s – and it’s arguable that Bond is just a jerk to everyone, indiscriminately – but it definitely makes for uncomfortable viewing.

Dr. No is suave, he’s sophisticated, he has weird metal lobster hands and likes to watch Bond sleep… His lair may not quite be the hollowed-out volcano that we’d later come to expect, but it does feature aquarium windows and a fantastic Ken Adams’ designed interrogation room.

Dr. No is also not afraid to go toe-to-toe with Bond, suspended over his reactor’s cooling vat, which let’s be honest, not every megalomaniac would risk. Unfortunately the casting of Joseph Wiseman (Canadian, Jewish) as the Chinese villain is understandably problematic. 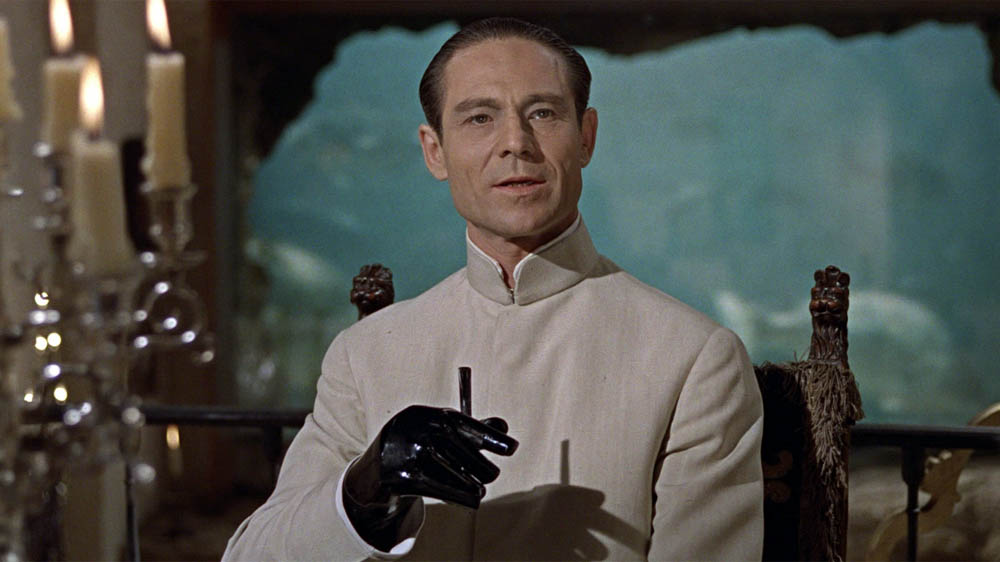 Smarmily played by Anthony Dawson, Professor Dent is the conniving sort who shoots first, asks questions later. When his first attempt at ending Bond via deadly spider bite falls flat (or rather is flattened with a shoe) he goes the more traditional route, but wastes his entire clip on an empty bed. Bond shows his true cold-blooded nature by dispatching him as soon as makes the slightest move to reach for his gun again. ‘That’s a Smith & Wesson, and you’ve had your six.’

Every self-respecting super villain has to have henchmen, and what better than The Three Blind Mice, three assassins who pose as blind beggars and drive a hearse?

Ursula Andress rising from the waves like a bikini-clad, knife-sporting Venus di Milo is so iconic that even the Bond films themselves have paid homage, twice: with Halle Berry in Die Another Day and Daniel Craig in Casino Royale.

Honey Ryder is young and seemingly innocent but not quite the damsel in distress that we tend to associate with early Bonds. She’s far more successful with a spider than poor Professor Dent and doesn’t hesitate to get involved in a fight, whatever the odds. 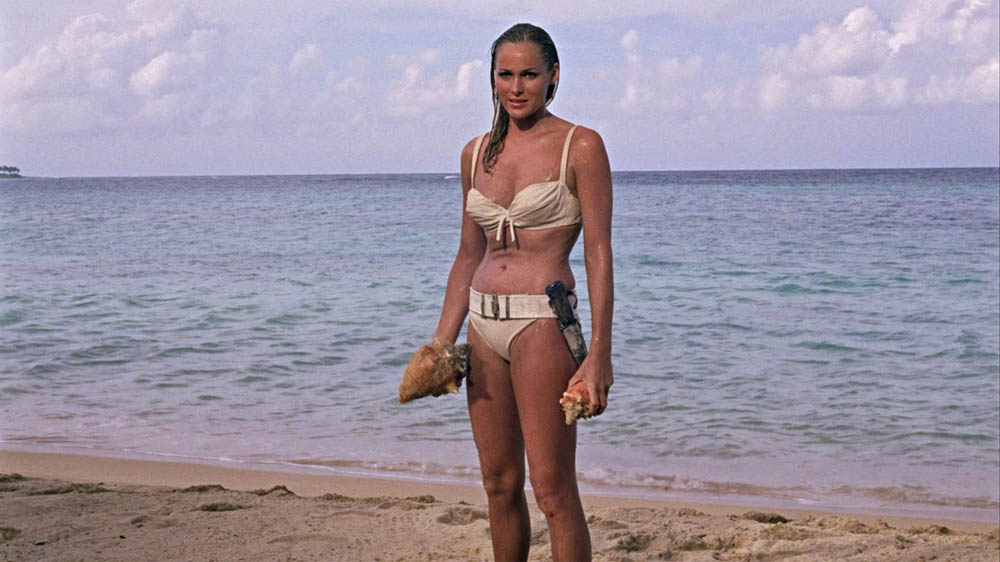 In the Other Bond Girl role, Sylvia Trench smokes, she gambles, she golfs. She even breaks in to Bond’s flat. But most impressively she’s the only Bond Girl to make a repeat appearance, going boating with Bond in From Russia With Love. Eunice Gayson’s impressively arched eyebrow was originally intended to appear even more often but sadly that plan never came to fruition.

There’s more problematic casting with Miss Taro, as Zena Marshall is not Chinese, but as the first example of the bad Bond girl she is also to be treasured. Of course her plan to have Bond run down by the Three Blind Mice takes a turn for the worse when a) they drive off a cliff and b) she’s stupidly given Bond full directions to her house instead of a more sensible dead end. Still, once Bond does show up she does her best to distract him with her feminine wiles. Pity Bond knows what’s up and has her arrested once he’s had his wicked way.

Bond has just won several hands of chemin-de-fer against a beautiful opponent. Sylvia may get to use the infamous line first (basically) but it’s the combination of the line and that we have yet to see his face that makes it so punchy. Oh, and because it’s the first time we hear the iconic Bond theme.

Some might say that it’s not a truly great Bond film unless a megalomaniac is trying to do something suspect with satellites, but interrupting rocket launches is close enough. Dr. No goes one step further and introduces our favourite shadowy organization, which would become Bond’s bête noir for several films to come.

Dr. No: ‘SPECTRE. SPecial Executive for Counterintelligence, Terrorism, Revenge Extortion. The four great cornerstones of power headed by the greatest brains in the world.

Not every girl came make Bond late for work. Well, OK, many can, but Sylvia did it first, and she did it with nothing but a kiss and a whisper. She may not enter our lives sun-drenched and salt-sprayed like Honey Ryder, but she broke into Bond’s flat and waited for him to return by tearing off a game of golf in nothing but one of his shirts. 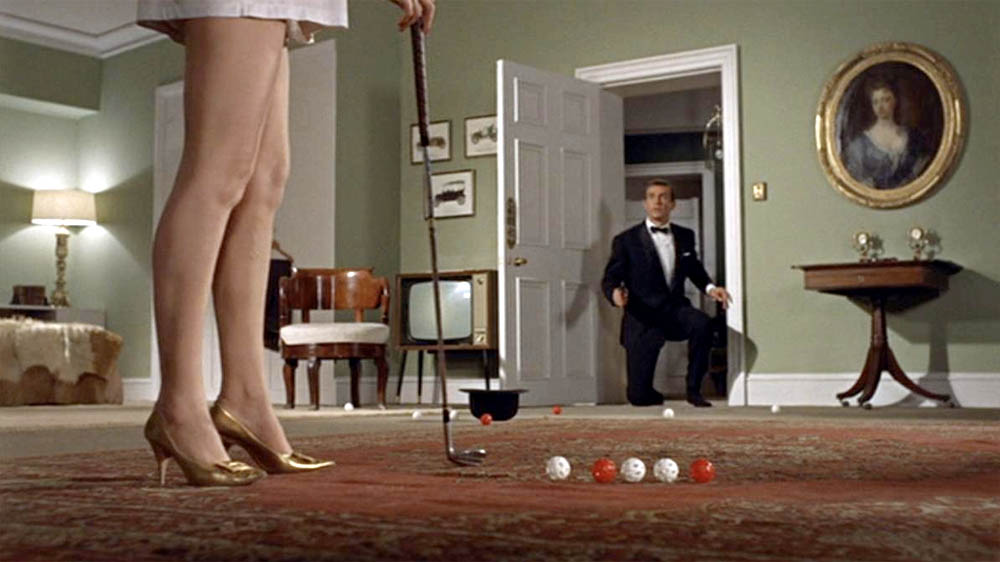 Sylvia Trench: ‘When did you say you had to leave?’

If the above makes you wonder about Bond’s priorities, picture this: Dr. No’s lair is a fire ball, the American rocket launches are proceeding uninterrupted and the CIA have turned up to clean up the mess. He’s being towed back to civilisation with Honey Ryder next to him in the bottom of a dirty old boat and he chooses to cut loose and make whoopee right there instead of wait half an hour for a hotel.

SPECTRE, thus far the longest-running criminal organization in the Bond Universe, is introduced – they return in From Russia with Love, Thunderball, You Only Live Twice, On Her Majesty’s Secret Service, Diamonds are Forever, For Your Eyes Only (sort of) and, believe it or not, Spectre.

Bernard Lee (M) and Lois Maxwell (Miss Moneypenny) would go on to stay with the franchise up until 1979’s Moonraker and 1985’s A View to a Kill, respectively.

The only other times that we see Bond’s flat are in Live and Let Die and Spectre.

Bond’s vodka martini features lemon peel – an ingredient thus far never mentioned again. The famous request for the martini to be ‘shaken, not stirred’ is also notorious amongst cocktail aficionados for being the exact opposite way a martini should be prepared.

Eunice Gayson and Lois Maxwell were originally hired to play each other’s role but swapped parts.

Sets and furniture were all made deliberately slightly smaller than usual to make Bond appear larger.

The painting of the Duke of Wellington in Dr. No’s lair is by Francisco de Goya and was notoriously stolen in 1961.

Sean Connery slept in his suits to get a feel for them before filming.

It may feel a little slower than we’re now used to in a Bond film, but it more than holds up. If you love Bond, you have to love Dr. No because this is where it all started. 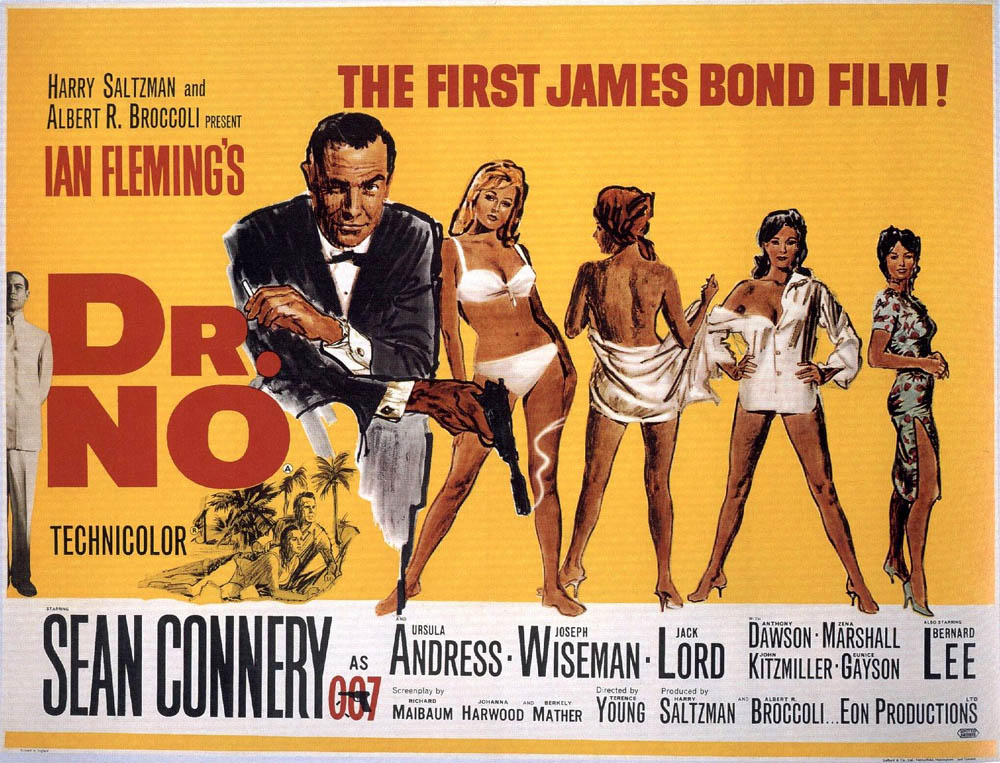 The cast is perfect, the locations gorgeous, and the action is pretty damn good for 1962. Subsequent films in the series will be bigger, bolder and brasher, and many will be just plain better, but they all owe Dr. No a significant debt.

James Bond will return in From Russia With Love.

What do you think of Dr. No? Let us know below…