After killing arch-nemesis Ernst Stavro Blofeld in a puddle of mud, James Bond heads off to infiltrate an international diamond-smuggling ring and uncovers a deadly scheme to ransom the world.

Played by a returning and freshly-bewigged Sean Connery, 007 quips his way through Amsterdam and Las Vegas before reaching an oilrig off the Californian coast where he discovers Blofeld isn’t dead after all and has used the stolen jewels to build a giant laser. Our hero saves the day, but not before Mike Myers has bookmarked the plot for future spoofing.

While Charles Gray’s camp, wise-cracking interpretation of Blofeld fits with the light-hearted feel of the film, it’s a far cry from the evil genius brought to life by Donald Pleasence and Telly Savalas.

More impressive are his assistants, Mr Wint (Bruce Glover, father of Crispin) and Mr Kidd (Putter Smith), the effete hitmen whose implied homosexuality is treated fairly credibly for a mainstream movie in 1971 – well, until the very end, when Wint is lamentably delighted at having Bond crush a bomb into his balls.

Although he nearly cracks on with the legendary Plenty O’Toole (‘Named after your father, perhaps?’) and gets all wet with belligerent bodyguards Bambi and Thumper, Bond’s only actual conquest is Tiffany Case, played by Jill St. John.

Starting as a sassy, sweary smuggler and ending up as a bawling buffoon in bikini bottoms (‘Tiffany my dear, we’re showing a little more cheek than usual,’ leers Blofeld), the disappointing Tiff is more memorable for her wigs and exclamation of ‘Oh my gard, you just killed James Bond!’ than anything else. 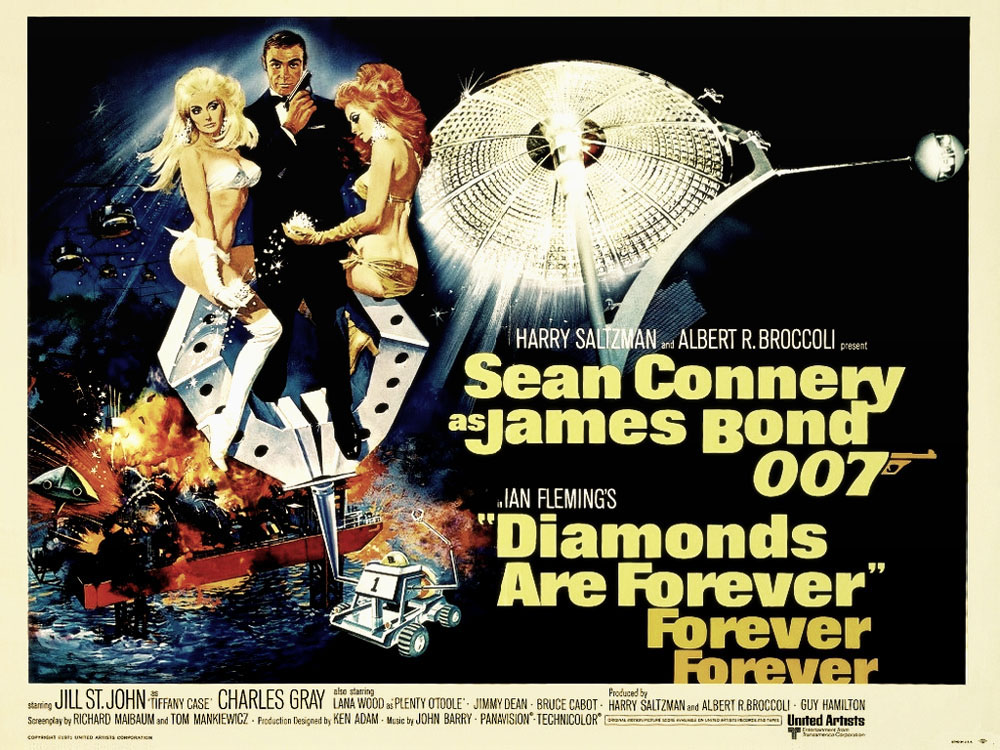 Although unquestionably among the funniest of the Bonds, Diamonds are Forever is mostly bereft of memorable action sequences.

The moon buggy chase and the Las Vegas car pursuit are incredibly lifeless, the climax on the oilrig is disappointingly bereft of jeopardy (not to mention a conclusion) and the only genuinely great scenes are Plenty’s pool plunge from a skyscraper window and the vicious elevator dustup between 007 and Peter Franks.

» After George Lazenby declined to return, early choices to replace him included two Americans – Adam West and John Gavin – and Michael Gambon, who declined the role because he was ‘in terrible shape’ and had ‘tits like a woman’.

» The first draft of the script featured Auric Goldfinger’s twin brother as the main villain.

» Although a large part of the film is set in the city, the words ‘Las Vegas’ are never spoken aloud.

» ‘You’ve caught me with more than my hands up.’

» Bond in a pipeline, to a rat: ‘Well, one of us smells like a tart’s handkerchief… I’m afraid it’s me. Sorry, old boy.’

» ‘I was just out walking my rat and I seem to have lost my way.’

» ‘Bitch. Your problems are all behind you now.’

» A dragged-up Blofeld is joined in the back of a cab by Tiffany: ‘Well, well, well, look what the cat dragged in…’

Although it’s a relief to see Sean Connery back in the tuxedo, and the film rivals even Roger Moore’s most eyebrow-raising moments for the most LOLs per minute, Diamonds are Forever lacks any real dramatic punch to counterbalance the barrage of gags.

Check out starburst-slot.co.uk for your own Vegas experience.

What do you think of Diamonds are Forever? Let us know below…