Discovery Season 4 may be a way off yet, but it is never too early to start speculating. Season 3 took the ship and her crew some nine hundred years into the future, to a devastated Federation; feeling the consequences of a cataclysm known as “the burn”, the remnants found themselves outpaced by the Orion controlled Emerald Chain.

With the Chain defeated and a fresh source of dilithium located, we left the Discovery under new management. Tasked with reconnecting the disparate parts of the Federation; we hope this means the next season might live up to its name. After Klingon wars, mirror universe antics, hostile AIs and time travel, we would love to see some exploration. The ship was originally a science vessel, after all!

From Lorca, to Pike, to Saru, the Discovery certainly gets through her Captains! The latest, Michael Burnham (Sonequa Martin-Green) has enjoyed a chequered journey to her first command. The orphan daughter of two scientists, she was adopted by Sarek and brought up on Vulcan, as a sister to Spock. We initially met her as First Officer of the USS Shenzhou, under Captain Phillipa Georgiou, where her mutiny at the Battle of the Binary Stars saw her stripped of rank and sentenced to prison.

Saved from that fate by the duplicitous Captain Gabriel Lorca, she became an essential part of the Discovery’s crew. Through her actions in bringing the Klingon conflict to an end, she was allowed to resume her Starfleet career and has served as Discovery’s Science Officer ever since. 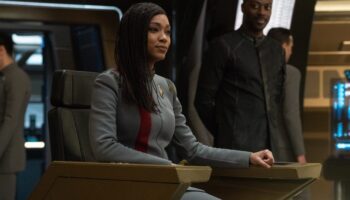 Leading the crew into the future, to stop precious sphere data acquired on one of Discovery’s adventures from falling into the hands of a rogue AI, Burnham at first struggled to find her place in the 32nd century. She is smart, strong-willed and capable, but also undisciplined and has issues with authority. Whether she truly has the right temperament for command remains to be seen. We imagine it will be a bit of a learning curve!

After the traumatic events of last season, Captain Saru has taken a leave of absence. Returning to Kaminar, he appeared to be helping the orphaned Su’Kal reintegrate into Kelpian society. Fear not though, as actor Doug Jones is apparently still with the show and we expect him to pop up in Discovery season 4. 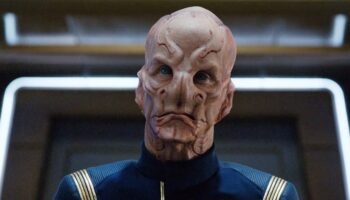 We are hoping Saru’s future will involve the Kelpian race, truly the only notable civilization added to the Star Trek universe by this show. Our guess is that he may become “Ambassador Saru”, his unique experiences and knowledge of their history seeing him become an elder of the race.

While she arguably had the toughest of days in command, Ensign Sylvia Tilly hardly covered herself in glory; she lost control of the ship to Ossyra and the Emerald Chain. Now we adore Tilly, and this may be sacrilegious, but is it time to accept that she is not destined for the big chair? On the other hand, her mirror universe counterpart more than makes up for our Tilly’s lack of bite. We’d love to see her character take on a better opportunity to grow. 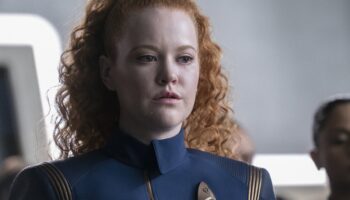 As the last season progressed the time jump became increasingly irrelevant (time travel is banned under treaty), but with Discovery’s new mission surely the ship needs a representative from present day Starfleet. As an outsider, but a face we have met before, the capable Lt. Wila (Vanessa Jackson) would be an ideal candidate.

A vital plot element in the first season, Discovery’s remarkable spore drive is less used now. However, it remains a critical part of Chief Engineer Paul Stamets’ (Anthony Rapp) duties… or it did. The convenience of Book (David Ajaja) also being able to control the ship, thanks to his empathic abilities, sets up tensions for Discovery Season 4. Stamets fell out with Burnham towards the end of season 3 and yet he often plays a vital part integrating the diverse crew together. We trust this dynamic will continue. 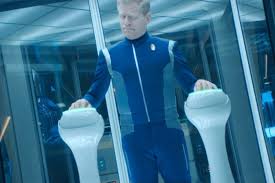 Can we look forward to a fleet of Spore Drive ships, each with a Kwejian pilot? It would certainly reduce the Federation’s dependence on dilithium! In the meantime, we anticipate the new Captain and her Chief Engineer having a little chat…

Faces in the Crowd

They may have their moments, but we still do not have a handle on the bridge crew. While Pilot Kayla Detmer (Emily Coutts) endured a PTSD subplot and Owo (Oyin Oladejo) was instrumental in saving the ship, the rest are masters of the meaningful look; they remain poorly served while sizeable chunks of plot go to the ‘big name’ characters. Let’s face it, Michael Burnham’s hairstyle has enjoyed more development this year! 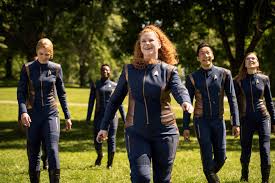 There’s Gen Rhys (Patrick Kwok-Choon), RA Bryce (Ronnie Rowe Jr.) and Nillson (Sara Mitich) – not all of them even have first names! We even met another across the final episodes: Lt. Ina (Avaah Blackwell) – where did she spring from? We bang this drum repeatedly and live in hope that they will be given more to do. It is not enough to keep telling us how remarkable this crew is, we need to see it! The alternative is more of the original crew to disperse, perhaps bringing back the red shirts as a way to put them in danger?

Although we know about the reduced circumstances of the 32nd century Federation, we have explored precious little of it. We travelled to Earth and Vulcan, now Ne’Var, and met Orions, Andorians and Trill. However, what of the other major races like the Bajorans, the Tellarites or even the Betazoids? Who will the next big villain be? There’s plenty to look forward to. 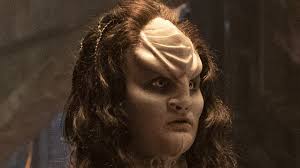 And what about those outside the Federation, such as the Cardassians or the Ferengi. Perhaps even their sometime allies, the Klingons? Our money is on a return for Mary Chieffo, playing a distant descendent of L’Rell? Have the Borg had their day? From watching Star Trek: Picard it would seem so; we’d like one of the shows to explore this piece of future history.

One of the many things Star Trek Discovery has done well is its integration of Classic Star Trek The Original Series ideas and doing so respectfully. Season 2 brought us the Enterprise, Captain Pike and Spock as well as a return visit to a classic story from the show’s original pilot episode. Season 3 brought a surprise return from a two-part story starring Joan Collins. We hope more pieces of the show’s past are presented for our enjoyment. We’ve been pleased so far and long may it continue. With the need to reintegrate the Federation and transport dilithium, who knows what might be next? The silicon life form from Devil in the Dark or even a return to the world of mimics we met in Piece of the Action?

With its development hopefully not too affected by the pandemic, Star Trek: Discovery Season 4 began principal photography in November 2020. It is set to continue until June 2021, but there is no news yet on when we will see it. Cultbox will keep you posted. In the meantime, all three seasons of Star Trek: Discovery are available in the UK on Netflix. You can also read our reviews of season 3, including the pivotal People of Earth.