With much discussion at the moment around how the sixth episode of Netflix’s The Haunting Of Hill House was shot in just five long takes, let’s revisit an episode of Psychoville which accomplished a similar feat back in 2009.

Post-The League Of Gentlemen and pre-Inside No. 9, Reece Shearsmith and Steve Pemberton co-wrote and co-starred in Psychoville, which ran for two series on BBC2. In its first series, the dark comedy followed five different sets of characters, including a bad-tempered children’s entertainer with a hook for a hand and a delusional midwife who believes her demonstration doll is a real baby – all connected by a mysterious letter they receive claiming ‘I know what you did’.

Some context for the episode in question: In episode 1, David has got himself a new job and tells his mum that he is a waiter. What he neglects to tell her is that he’s actually playing the role of a waiter at a murder mystery evening. He is swiftly fired on his first day for staging an overly graphic crime scene, so returns home distressed and covered in (fake) blood, informing his mum that he “did a bad murder”. Maureen takes this to mean that her son has committed a real murder, and the pair embark on a killing spree to eliminate all of the ‘witnesses’ i.e. other members of the murder mystery troupe. Episodes 2 and 3 see them claim two victims, and episode 4 opens with them dispatching of a third, Martin Pike, in his London flat. 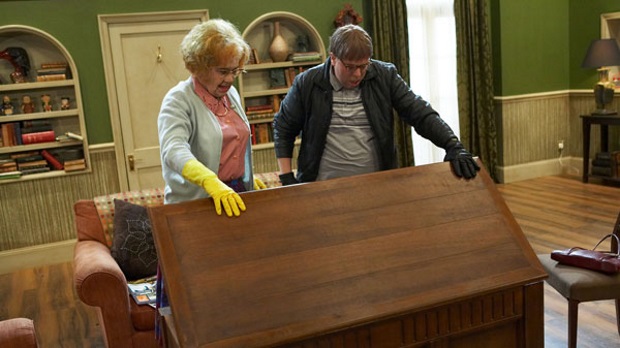 After initially writing six episodes for the first series of Psychoville, Shearsmith and Pemberton were told that if they wrote a seventh and made it as minimal as possible, with just one location and a limited cast, they would receive additional budget which could then be spread across the other six. If you saw the recent live Halloween episode of Inside No. 9, you’ll know that Shearsmith and Pemberton are not averse to setting themselves a challenge, so in addition to making the episode confined to just one location, they decided that it should also be shot in just two long takes.

The first take runs for around 20 minutes and the second for around 10 minutes – the main reason for this being that the hydraulics of the camera dolly would run out after 20 minutes and need to be pumped up again. If this limitation hadn’t existed, who knows… they may have even tried to shoot it all in one!

In a reference to Alfred Hitchcock’s Rope, which was also shot as a series of long takes, the episode begins with David and Maureen strangling their victim (while the score from Hitchcock’s Psycho plays on the radio) before hiding the body in a wooden chest. Then, while they are tidying up and making themselves some tea, there’s a knock at the door. With the unexpected arrival of Chief Inspector Griffin, played by The League Of Gentlemen’s Mark Gatiss, David is forced to pose as the man he’s just murdered and answer some awkward questions. 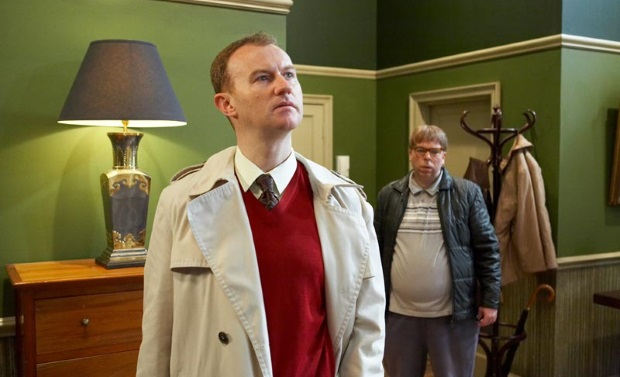 This was actually the first episode of Psychoville to be filmed, and they only had two days in the schedule to get it right. Making matters even more difficult was the fact that, due to filming of BBC4’s Crooked House, the only rehearsal time they had with Gatiss consisted of a few hours in Windsor (where Crooked House was being filmed) two days before the shoot and then one full day on set. They needed to be word-perfect with their lines and precise with their blocking, as any mistake meant they had to start all over again. In one particular take, they made it all the way to the end before Gatiss stumbled on his final line.

Among the DVD/Blu-ray extras for Psychoville series 1, you can watch the second part of the episode from alternative angles, allowing you to see everything that’s going on behind the scenes. For example, it gives a full view of crew members continuously moving furniture to make way for the camera dolly, as well as Gatiss sliding along the floor in order to pop up behind the sofa.

It’s also worth highlighting that this isn’t just a technically impressive episode, but also an entertaining one. There’s a memorable exchange involving a knife and a plate of hobnobs, a mix-up between vendetta and Vienetta, and a moment ensuring you’ll never hear Black Lace’s Superman the same way again. Although it wasn’t intended to be a standalone episode, it works pretty well as one (rather like an instalment of Inside No. 9), and for viewers watching the whole series it provides some interesting backstory for two of Psychoville’s most compelling characters. You should definitely watch it if you haven’t already – there are some big twists and turns that we deliberately haven’t spoiled for you here…