Jonathan Strange and Mr Norrell’s title is a very clever one.

In an alternate version of British history, magic once existed; however, it’s been gone for hundreds of years. Gone, that is, until one Mr Norrell develops a talent for it. Working for the British government amid the Industrial Revolution, the world’s only magician tries to make a name for himself, aiding in the war against Napoleonic France.

But when another man develops a talent for magic – one Jonathan Strange – Mr Norrell finds his undisputed position as Britain’s only magician under threat. Working together, the two magicians’ relationship is further complicated by troubling prophecies and the presence of a mysterious, otherworldly figure known as ‘the gentleman with the thistle-down hair’…

Based on Susanna Clarke’s gigantic novel, BBC One’s new seven-part series is an incredibly pleasing affair. Eddie Marsan is superb as the crotchety Mr Norrell – and his constant, unwavering advocacy for books and reading is something to cheer for – while Bertie Carvel is a revelation as the young spirited wastrel that is Jonathan Strange. 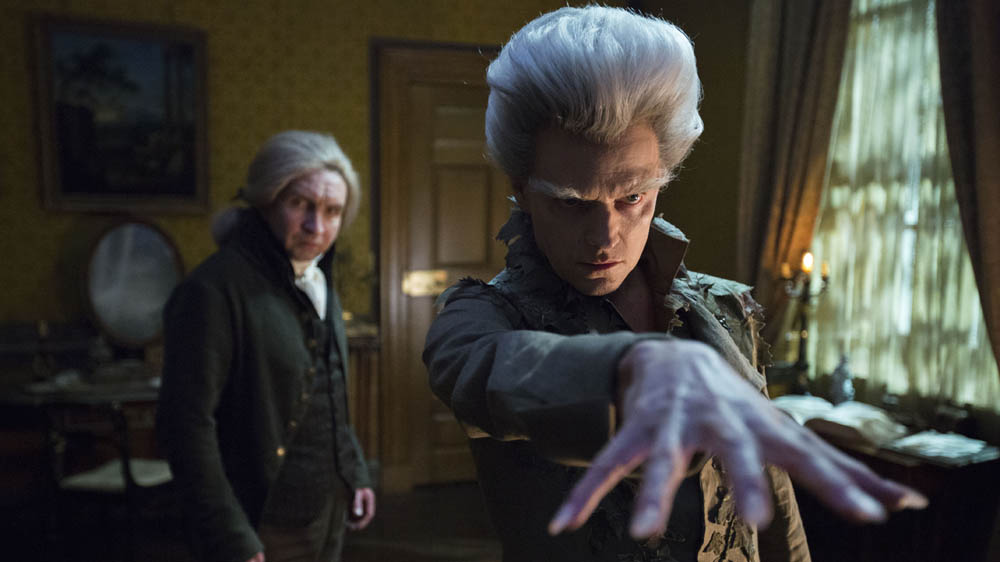 The real star, though, is Marc Warren as the Gentleman, a strange, unsettling presence who brings real darkness into the story. The production design, too, is outstanding, with the Gentleman’s hidden realm – at once decadent and decaying – a real feast for the eyes. The special effects, while used sparingly, are supremely effective when utilised, and all of this makes Strange and Norrell a particularly striking piece.

Based on the two episodes we’ve seen so far, Jonathan Strange and Mr Norrell is a triumph, weaving historical fiction, period drama and fantasy together in a way that seems entirely plausible – magic in Britain just makes sense – and ought to appeal equally to fans of multiple genres.

At a special preview event at the BFI recently, the show’s stars Bertie Carvel and Marc Warren, along with writer Peter Harness (Doctor Who), producer Nick Hirschkorn and director Toby Haynes (The Musketeers) spoke to us about making the series.

Here’s what we learnt…

The story nearly had a much bigger adaptation…

NH: “New Line originally had the rights, and Peter Jackson was initially due to make it!”

Marc Warren approached the role thanks to… Judy Finnigan?!

MW: “A year before it all came about I was in South Africa having lunch with Richard and Judy – seriously – and at one point Judy stopped and said ‘If they ever make Jonathan Strange and Mr Norrell, you have to play the Gentleman with the Thistledown Hair’. Just like that. And I said ‘Oh, what’s that?’

“Then I finished the job I was doing, and took a few months off, and suddenly I heard they were making this show. They weren’t actually advertising for the Gentleman, so I figured they were going to give it to some hot-shot American star. So I called my agent and said ‘I’ve gotta get in for an audition for this.’”

…and he landed the role thanks to actual magic!

MW: “I came in and met Toby and I’d done a spell – it’s called a sigil – it’s an actual spell that I’d learnt how to do. And I bought it in and presented it to Toby and said ‘I AM the Gentlemen with the Thistledown Hair.’ And I got the gig!”

BC: “I thought he was me. When you read a book you love, you feel some kinship with the protagonist. I absolutely ate it up. I was casting myself in the film of it, thinking I’d never have a chance at the role – some hot shot-American would get it – but thank God all the Americans must have said no!”

…and he thinks the script is Shakespeare-worthy!

BC: “When I got to read Peter’s script, what’s so striking and brilliant about it is that the horizon of the story keeps receding. A bit like when you’re out for a walk in the hills or the mountains and you climb to the top of a hill, and you think you’ve reached the summit, and then there’s another one behind it! It carries on surprising you. You start off in Henry IV Part 1 and end up in King Lear!”

The show took inspiration from Doctor Who…

TH: “Every draft had magic in it, but it wasn’t achievable, we’ll have to work around it. What I like about it is that all those solutions you get force you to be clever. And this is something I learnt from Doctor Who.

“I remember talking to Steven [Moffat] about how economy gave birth to the greatest idea in sci-fi television. If they could have afforded to build a massive time-traveling space ship they would have done, but they couldn’t, so they went with the police box, and that’s the best idea in TV history.”

…but veered away from Harry Potter’s influence.

TH: “The magic needed to come from something, it needed to come from nature. We’ve seen Harry Potter magic, with the lightning and all the light from nowhere, but we wanted it to feel physical, like it came from somewhere, we had a logic to it. True power is from nature and all the spells you see throughout the series have a tangible, physical element.”

…and the magic is much more effective for it.

MW: “The magic is credible. It’s grand. It often happens off-stage, and you hear about these tremendous feats, like the weather – and the weather’s not small, it’s a massive event – and it’s much more real and credible.”

Attention to detail for this world was paramount…

PH: “The key with fantasy is you’ve got to believe that world. Otherwise you’re not going to go along with the story. So production design, production values, direction, all that stuff that creates a world that is seamless, and very consistent, keeping that consistency of look, and making sure those departments are talking to one another… that was the goal.”

…and Susanna Clarke is fully on board!

NH: “There was a wonderful moment when Susanna came to me and said ‘Johnny’s just told me what happens next – it’s bloody brilliant!’

Jonathan Strange and Mr Norrell begins at 9pm tonight on BBC One.