CultBox caught up with Ruth to find out more…

How was filming the Beauty and the Beast pilot?

“It was good, I think, it was mad! Lots of work, lovely people, it was great fun. It’s more in the vein of the classic fairytale, but it’s about a princess and the beast is a bodyguard.”

Can you tell us a bit about your character, Grace?

“She’s the princess of this kingdom… I’m not really sure how much I’ve allowed to say, it’s very top secret! I don’t want to get killed in the night.”

Darius Campbell, who most UK viewers will remember from Pop Idol and Popstars, is playing the bodyguard. What was he like to work with?

“Really nice guy, he’s a lovely fella. We were a pair of Celts – Scottish and Irish! It was nice to be with somebody from closer to home. I wasn’t really into Pop Idol but obviously I knew the name.”

And Chris Egan from Home & Away as playing your fiancé?

“He’s lovely, very down to earth and normal, I didn’t actually know he used to be in Home & Away! No airs and graces.”

When do you hope to hear if that’s been picked up?

“Hopefully within the next two weeks. There’s been about a hundred pilots made this year. You kinda just make it and then whatever’s meant to be will be. “

So will you be moving to America if that goes ahead?

“I guess so, yeah, I haven’t really thought about it yet! It’s part of the job, you go wherever the work is. I’ve been in Ireland for ten years but it’s par for the course. If you’re worried about it then you’re probably in the wrong job! You just go ‘okay, where we off to today?’. I very much just think about it the day before. Or after I’ve finished!”

Titanic has just come out on DVD, did you watch that when it was on ITV1 recently?

“I saw it on DVD and I loved the scripts when I read it initially. You had to read it a few times to get a grip on what’s happening, there’s so many different storylines. I was really excited to see how John, the director, had brought it all together.

“I had the luxury of watching the four of them back to back which I think is the best way to see it, so you have no time to forget what’s happened! I really enjoyed it as a four-hour marathon!”

What was the filming experience like on that? Wet, I imagine?

“It was quite wet but the main thing was the heat, it was insane! We were all sweating non-stop. We shot it in Budapest in the middle in the summer so it was roasting. The poor director would be shouting ‘Can you remember to shiver?’, while we felt like we were on a beach.

“So yeah, we were wet, but mainly with sweat, which was lovely. I didn’t have too much water frolicking, although I wouldn’t have minded. You’d look up at the beams and see all the crew lads with their shirts off, just flaunting it!”

Do you miss Primeval? I guess it was quite a while ago now that you shot Series 4 and Series 5 back to back?

“Yeah, it was nearly two years ago! It was great fun, it was my first proper foray into CGI, so that was a bit of an education! Obviously I hadn’t really come across the man with the tennis ball on a stick before! That’s one to get used to.

“It’s like being a kid, with someone going ‘And now the slipodosaurus is running at you’ and you’re thinking ‘I don’t know what a slipodosaurus looks like’ so you just make it up in your head and pretend to be afraid of it!”

Andrew-Lee Potts is going to guest star as Connor in the upcoming Canadian spin-off, Primeval: New World. Would you be interested in appearing as Emily in the new show?

“Ah, that’s cool! I’m very much out of the loop! If I was in Vancouver that’d be extremely handy, so who knows! I definitely had great fun on Primeval so never say never. When I was in Vancouver some guy in a restaurant was like ‘I’m here doing Primeval’, it was so weird!” 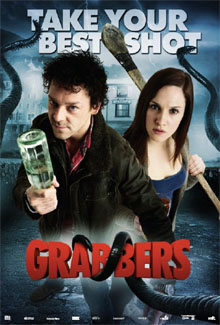 You’ve got Tormented director Jon Wright’s monster movie Grabbers coming out soon, starring Richard Coyle and Russell Tovey. Can you tell us a bit about that?

“Yeah, I really liked making that film. It’s kind of a mad-cap comedy monster horror romantic movie. It’s set on this island off of Ireland and this washed-up policeman lives there. My character’s this very by-the-book policewoman who comes in from the city to help him out and they’re kinda chalk and cheese. “

“Basically, this alien from the sea comes and sucks everyone’s blood on the island. And they figure out that the only way he won’t such your blood and kill you is if you’re drunk, as he’s allergic to alcohol.

“So we’re all marooned on this island for the night and we have to get smashed and fight the alien from the sea while we’re hammered. It’s just hilarious and a great craic for me, I’d never played drunk like that before, pretty much non-stop. “

Did the cast practise playing drunk before filming?

“Yes, we had a little experiment where the director filmed us and we watched it back the next day and it was horrific. It’s something nobody should ever have to watch, it was not very flattering! But it was actually quite beneficial, so we’d just refer back to that, just to see mannerisms. But never again!”

Did you enjoy the effects work on that?

“It was CGI again, much like Primeval – the familiar man with the tennis ball – so at least I had a bit of experience for it.”

What else have you got coming up?

“For now I’m just stuck in limbo until we hear about Beauty and the Beast so I’m going to make great use of it and go on holiday. For the first time ever I won’t be thinking ‘oh God, maybe I’m missing some work!’”

> Buy Titanic on DVD on Amazon.

Watch a clip from Primeval Series 5…