The teen spy series is back on Friday December 3rd and will be found at IMDb TV.

Amazon have just announced the return of its Alex Rider series, based on the hugely successful series of novels by Anthony Horowitz. The show follows London teenager Alex, who has been unknowingly trained as a super-spy from a young age. 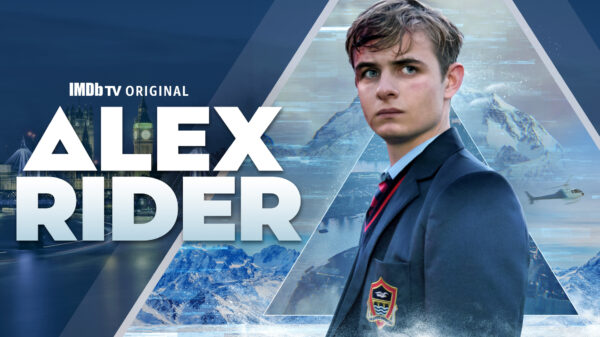 Season Two is adapted from the fourth novel in the series Eagle Strike:

Alex is still reeling from the traumatic events at Point Blanc, and desperately wants to return to a normal life. But when his new friend Sabina’s father, journalist Ed Pleasance, is attacked by Yassen Gregorovich, the man who may have killed his uncle, Alex reluctantly finds himself drawn back into the world of international espionage.

Cut loose from his one-time allies within shadowy MI6 division The Department, Alex discovers a link between Ed, a dangerous hacker known as Smoking Mirror, and tech billionaire Damian Cray. With the help of his guardian Jack and trusted friend Tom, Alex must unravel a sinister political plot with global repercussions, the answer to which may be locked within Cray’s latest product, the global phenomenon video game Feathered Serpent.

In the UK and US, you can track down Alex Rider on the new-ish free to air streamer IMDb TV, which has adverts but promises only “half the ads of linear TV.” It’s available as an app and also a free channel within Prime TV.

In Australia, Canada, Italy, Germany and Latin America, Alex Rider Season 2 can be found as an ‘Amazon Original’ on Prime.