Disney has lifted the lid on the Disney+ streaming service, confirming that it will launch in the US first before rolling out around the globe. Here’s everything you need to know about the upcoming Netflix rival…

Following an ‘Investor Day’ hosted by the Walt Disney Company, this description of Disney+ has been posted on the company’s official website:

“The service will offer fans of all ages a new way to experience the unparalleled content from the company’s iconic entertainment brands, including Disney, Pixar, Marvel, Star Wars and National Geographic, and will be available on connected TV and mobile devices.”

The service will launch in America on November 12th 2019, with a price point of $6.99 a month. That translates as £5.35 GBP. After its US launch, Disney+ will “rapidly expand globally, with plans to be in nearly all major regions of the world within the next two years.”

This picture of the service’s layout was also revealed… 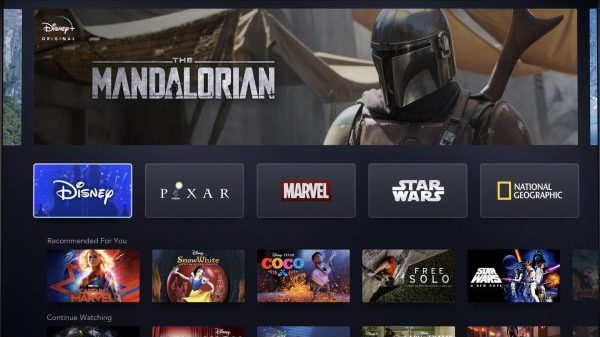 • The Falcon and The Winter Soldier

• Into the Unknown: Making Frozen 2

• The World According to Jeff Goldblum

• Magic of the Animal Kingdom

• The Phineas and Ferb Movie

• Lady and the Tramp

Every episode of The Simpsons will be available on Disney+, too, following the merger between Disney and Fox. All in all, Disney is promising “an impressive collection of more than 7,500 television episodes and 500 films including blockbuster hits from 2019 and beyond.”