Skinner told SFX: “We’ve got the most fantastic episode by Mark Gatiss, where we are bringing back the Ice Warrior… on a submarine! It’s a really wonderful kind of ‘bunker’ episode, and a classic monster which Mark has brought his own inimitable twist to.”

The exec added: “Mark is an enormous fan of the Ice Warrior stories and came up with the idea. The sense of a monster of that scale and that size trapped in a really small, contained environment such as a submarine was a really brilliant story to be able to tell … Letting a huge Ice Warrior loose at the heart of a classic Hunt For Red October style submarine movie was exactly the kind of story that the Doctor should get mixed up in.”

Apparently titled ‘The Cold War’, the episode is directed by Douglas Mackinnon and guest stars David Warner (The Omen) and Liam Cunningham (Merlin).

Mark Gatiss commented: “I’ve always loved the iconic Ice Warriors and have been badgering to bring them back for ages. And now they’re on a ssssssubmarine! With Russians! I’m a very happy anorak right now.”

Steven Moffat previously teased: “Prepare to shiver in terror and gasp along the lines of ‘Oh my goodness, is that a…?’”

The Ice Warriors were last seen in 1974′s ‘The Monster Of Peladon’.

Series 7 Part 2 begins on Saturday 30 March on BBC One and BBC America.

> Find out all the latest cast news and story details in our Series 7 news summary.

Are you looking forward to the return of the Ice Warriors? Let us know below… 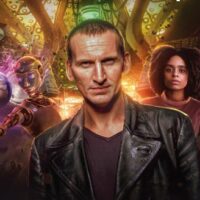 The Ninth Doctor Adventures: Back To Earth – audio boxset review