E4 has ordered a semi-autobiographical sitcom with a working title of Mae and George, from comedian/writer/actor Mae Martin. Here’s everything we know about the show, including the impressive casts it’s assembling…

Channel 4’s official press bumf tells us that the series will consist of six 30-minute episodes, and it will be written by Mae Martin and Joe Hampson (Skins, Newsjack). It’s a co-production between Channel 4 and Netflix, with the Objective Fiction production company handling the production.

Here’s a pic of Martin, Ritchie, Lukis and Kudrow on-set in Manchester… 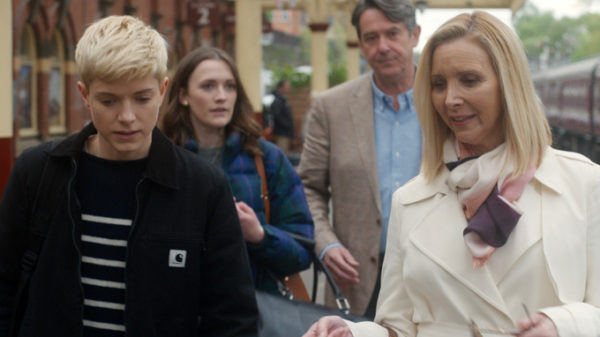 We’ve also got this official description of the show:

“The series follows recovering addict and comedian Mae, who is trying to control the addictive behaviours and intense romanticism that permeate every facet of her life. Life is further complicated by a new and all consuming relationship with her new girlfriend George…

“Mae and George is a deeply personal, darkly hilarious and poignant story about the unique pressures of navigating the modern-day fluid landscape of gender and sexuality.”

Martin, who will star in the show as well as co-writing it, offered this statement:

“We cannot wait to make this show with E4, Netflix, and Objective Fiction – WHAT A DREAM. I’m especially pumped to be co-writing Mae and George with my best friend Joe Hampson. He has such an incredible head of hair. We are excited to make a show that is both funny and sad, like our lives, and I hope they’ve factored therapy into the budget because I’m already hanging by a thread.”

We’ll keep you updated as we hear more.