BBC Radio 4 has announced that authors Neil Gaiman and Terry Pratchett will be creating a new dramatisation of their co-penned cult-classic, Good Omens, for the station.

The audio drama will star Colin Morgan (Merlin) as Newton Pulsifer, Josie Lawrence (EastEnders) as Agnes Nutter and Paterson Joseph (Peep Show) as Famine, with Mark Heap (Spaced) and Peter Serafinowicz (Shaun Of The Dead) as Aziraphale and Crowley.

Originally released in 1990 and listed among the BBC’s Big Read Nation’s 100 favourite books, this is the first dramatisation of Good Omens.

Cameos will include the Gardeners’ Question Time team, as well as Neil and Terry themselves.

The official synopsis reads: “According to the Nice and Accurate Prophecies of Agnes Nutter, Witch, the world will end on a Saturday. Next Saturday in fact. Just after Any Answers on Radio 4.

“Events have been set in motion to bring about the End of Days. The armies of Good and Evil are gathering and making their way towards the sleepy English village of Lower Tadfield. Atlantis is rising, fish are falling from the sky, the Four Horsepersons are assembling; everything seems to be going to the Divine Plan.

“Everything that is, but for the unlikely duo of an angel and a demon who are not all that keen on the prospect of the forthcoming Rapture. In fact the prospect of Armageddon is all really rather inconvenient for them actually. But if they are to stop it taking place they’ve got to find and kill the one who will bring about the Apocalypse: the Antichrist himself. There’s just one small problem: someone seems to have mislaid him.” 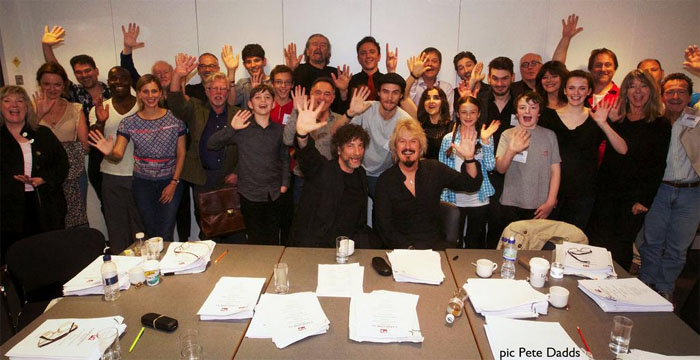 Good Omens is currently scheduled to air on BBC Radio 4 in December, broadcast across a week in five half-hour episodes and culminating in an hour-long finale.

Gwyneth Williams, Controller, BBC Radio 4, commented: “I’m delighted to have Neil Gaiman back on Radio 4 – and this time with Terry Pratchett. I can’t wait to hear what they will do with the Apocalypse. The Radio 4 audience loved Neverwhere and Good Omens will be a splendid Christmas treat.”

Are you looking forward to Good Omens? Let us know below…