A grim and gruesome festival provides the focus for the latest tall tale of Tom Baker’s retirement.

In fact it is a wonder that Susy Goshawk, Tom’s former co-star, is prepared to risk another visit to Baker’s End; since Tom ‘died’ and was resurrected as the self-styled ‘King of Cats’, he has attracted no end of trouble – on this occasion it is talking cabbages, rural horror and human sacrifice.

In the stifling heat of late summer, the trains have stopped (doubtless run by Southern Rail) for fear of spontaneous combustion and Susy finds herself stranded in Happenstance as the locals celebrate the grotesque festival of “Tatty Bogle”.

Though the scarecrow celebration is an annual event, once every thirteen years the rituals take on an added, horrific dimension; blood rains down from the sky and the villagers become gripped with a zealous, lust for sacrifice to appease their grimy god.

Katy Manning’s Suzy once again narrates, cementing her role as our voice of reason in the madness. As ever, she is an outsider to the strange goings on in the village, a position which allows her, and us, to boggle at the events as they unfold. 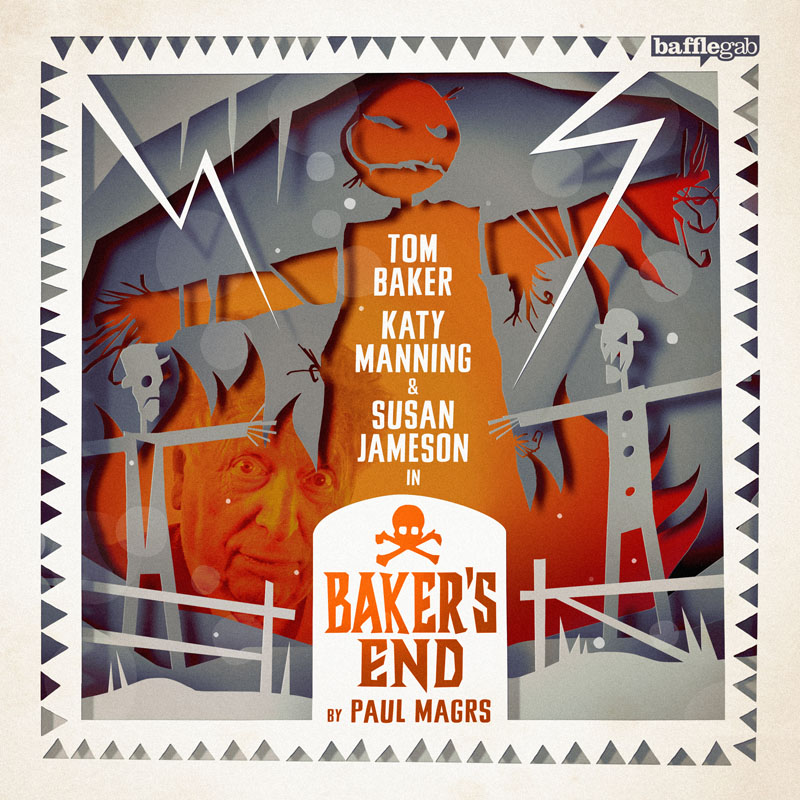 Tom’s housekeeper Mrs Frimbley (Susan Jameson) is central here and she begins acting very oddly; off-loading her domestic responsibilities onto Susy and concealing a hideous secret out in the fields.

Often rather frosty, Mrs Frimbley warms up considerably revealing a hitherto unseen maternal nature and even revealing her first name, Vivienne. We adored the scene early when she was threatened by a pair of sinister children on the doorstep, before revealing that there are no children in Happenstance.

Taking all his feline antics in our stride, Tom is still building that tower from purloined gravestones and has made a home in the vegetable patch, this third episode of Baker’s End seemed a little darker in tone, radiating the unsettling chill of a classic horror movie to begin with. As it progressed, the blend of mirth and madness took us on an unexpected journey and raised the temperature for a climatic confrontation.

As ever, Tom Baker remains enthralling and endlessly playful. Writer Paul Magrs grants the actor a wish here too; Tom once famously suggested that his Doctor might have a talking cabbage as a companion and he is duly provided with ‘Eric’. Among countless gems of imaginative dialogue, from fartleberries and Tom’s doggerel (catterel?) rhyme to the appallingly coarse chants of the locals, our favourite this time had to be his hilarious description of the scarecrow rituals as “unhygienic hijinks!”

‘Tatty Bogle’ is the final story in the Season 1 of Baker’s End and it concludes with a tremendous cliff-hanger, so we very much hope there will be more. Paul Magrs and friends have created something very special here; endlessly surprising, riotously funny and thoroughly peculiar.

Released on CD and download on Friday 3 March 2017 at bafflegab.co.uk by Bafflegab Productions.