Tom Baker has long been obsessed with his own mortality, famously purchasing his own gravestone which is handy as ‘The King of Cats’ begins on the way to his funeral.

When he first returned to the role of the Doctor, it was for the now defunct AudioGo in three series of linked adventures, written by Paul Magrs. Baker’s End reunites the pair with their continuing email conversations which have sparked this terrifically odd story into life.

Suzy Goshawk (Katy Manning) is on her way to the village of Happenstance to pay her last respects, but soon becomes fascinated in the details of her former co-star’s demise which are not only colourful, but vague and wildly conflicting too.

When inclement weather forces her to stay at “Baker’s End”, at the insistence of Tom’s rather sour housekeeper Mrs Frimley, Suzy becomes immersed in the mystery of his death as well as the unsettling and unseemly festive antics of the local residents.

What follows is a bizarre, off-kilter story suffused with the feeling that almost anything might happen. Towards the end, it even gets a touch bawdy which was hilariously unexpected. Yet for all the insanity, this is a smartly constructed tale with comes together neatly at the conclusion as well as sowing the seeds for more – and two further episodes have already been commissioned. 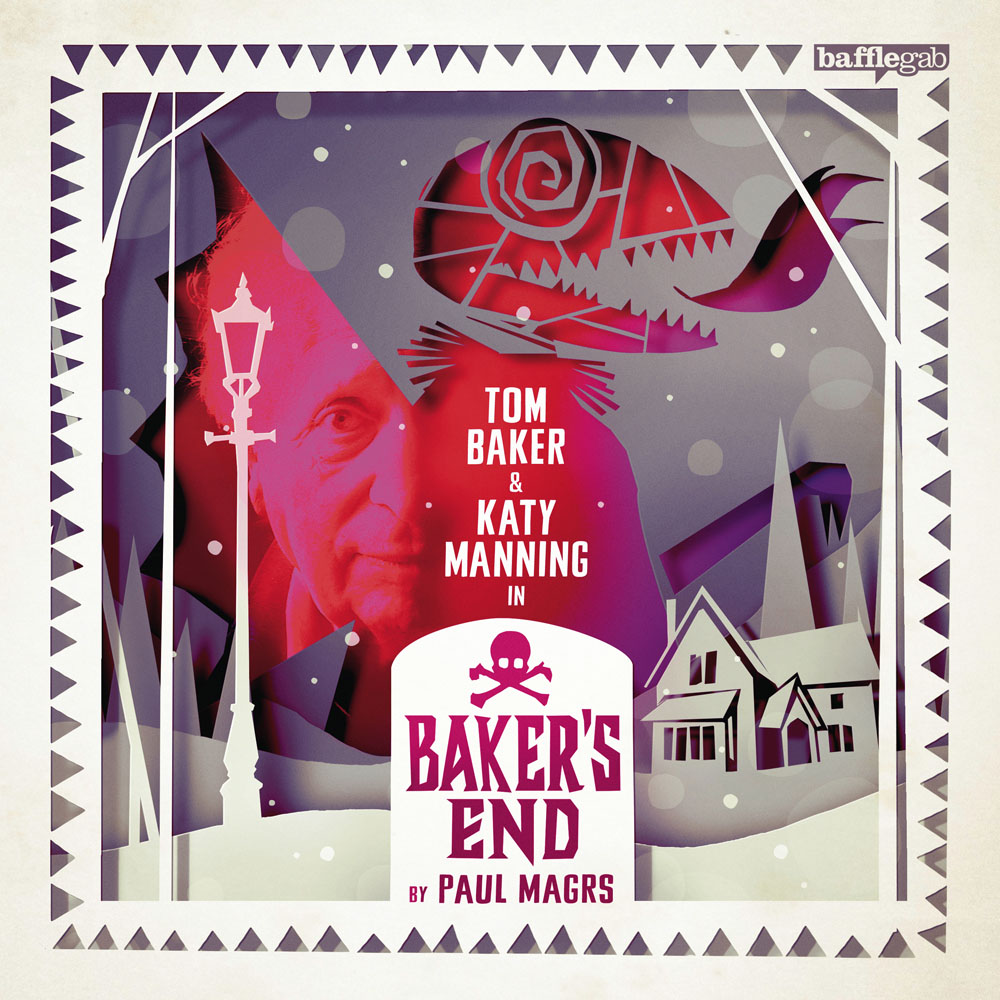 Baker is in full flow here, playing an amped up version of himself, much in the same way that Matt Le Blanc does on ‘Episodes’. Some of the nuttier moments in his performance putting us in mind of his vivid rendition of A Christmas Carol and there is a real love for colourful language throughout, with Tom revelling in dialogue peppered with the words of CS Lewis’ such as ‘frabjous’ and ‘fruminous’, as well as some even stranger; “murksome” and “mumblecrusts” sent us scrabbling for a dictionary to find their derivation.

Despite the star’s larger than life presence, the rest of the cast get a fair crack of the whip and in fact, for all of Baker’s lunacy, it’s as much Katy Manning’s story as it is his; Magrs cleverly positioning her in the familiar companion role to ask the questions and experience the weird goings on for us. Both the village setting and the casting of Susan Jameson as Mrs Frimley are a pleasing call-back to the Nest Cottage years, and we particularly enjoyed David Benson’s ailing Reverend too.

While it may be a little too outré for some, as a vehicle for Tom Baker to do his thing, unrestrained by the format of Doctor Who and in collaboration with the surreal imagination of Paul Magrs, this shaggy cat story is probably the oddest thing you will hear all year.

It may well be the funniest too!

Out now on CD and download from Bafflegab Productions.

What did you think of Baker’s End: The King of Cats? Let us know below…