Imagine, if you will, the following scene. You’re sat having a relaxed lunch sat outside a bar in one of the many side streets around Montmartre.

As you finish your drink and toy with asking for the bill (l’addition) you realise you recognise the music playing in the background from inside. You concentrate for a moment and realise it is a jazz version of one of your favourite 1970s rock classics, sung in French and heavily syncopated. It’s entirely wonderful, unexpected and memorable. This, then, is the equivalent of The New Adventures of Bernice Summerfield Volume 3: The Unbound Universe.

Bernice Summerfield is no stranger to travelling with the Doctor, and as played by Lisa Bowerman has appeared in numerous Big Finish audio adventures. When the TARDIS appears and out pops David Warner, little does she know he is about to whisk her off to another universe altogether. It’s Doctor Who, but not as we know it. Cue the adventures!

David Warner’s Doctor drags Benny back to his dying reality and they soon meet all sorts of unusual people in the James Goss story ‘The Library in the Body’. Prime amongst these is the Mother Superior of the Sisters of St Bedelix, played with great vigour by Rowena Cooper. Think singing nuns with guns and a love of tea trying to save the last library in existence. We also get glimpses into the psyche of this version of the Doctor, and not everything is to be admired. In this reality he is not widely loved, and has dark secrets.

Pure comedy is followed by irony in the Guy Adams story ‘Planet X’, a world so dull it never got named. Benny and the Doctor have to deal with Prime Minister 470 (Julie Graham) and her machinations as she attempts to keep her planet under the radar as war rages across the universe. Benny befriends Millie (Sophie Wu), a name she gives her instead of her real name; girl 23,454,113.

The story manages to be ironic as well as deeply moving and sets the balance between Benny and the Doctor perfectly. This is after all a Benny box set. 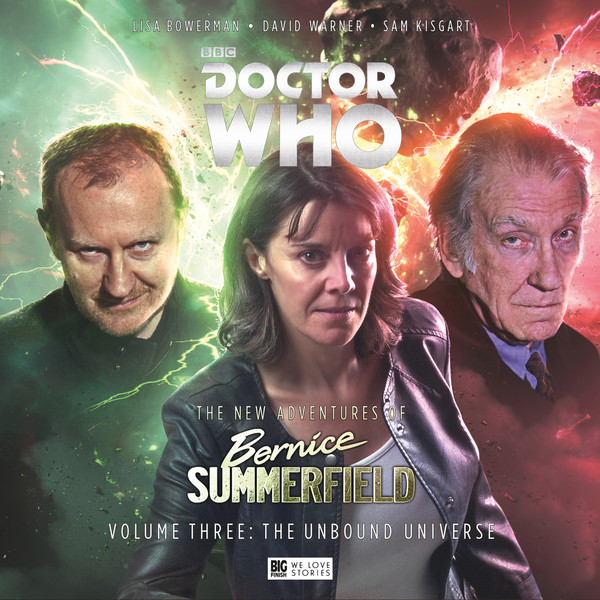 Una McCormack moves from ironic to surreal in ‘The Very Dark Thing’, where rivers sing and unicorns prance through emerald forests. For the first scenes this is a strange fantasy but as Benny takes control and explores further we have a story of how one universe dealt with its own version of the Time War with disastrous consequences for all. It is by far the most moving of the set, and the story most demanding of a re-listen.

Events come to a conclusion in the Emma Reeves story ‘The Emporium At The End’. The final song has been sung and everyone flees to the gateway and finds the Emporium At The End is having a sale. We also get a villain to match the unbound Doctor, a version of the Master played by Sam Kisgart. We learn what drives the Doctor, and his secrets are revealed. The singing nuns make a return and there is plenty to enjoy.

The extras go behind the scenes and explore the role of Sam Kisgart in some depth. Sam Kisgart is reprising the role of the Master from the 2003 Big Finish release ‘Sympathy for the Devil’ in which David Warner played the unbound Doctor. A then little known David Tennant also appeared as a UNIT Colonel – whatever happened to him? From the extras it is clear Sam Kisgart benefited from careful editing and coaching to deliver what comes across as a superlative performance as the Master.

In the end it was all great fun, and as an experiment a great success. Fingers crossed for more, and the sooner the better.

What did you think of ‘The Unbound Universe’? Let us know below…