Directed by Scott Handcock (who wrote the final two stories) this is a collection of eight brand new, half hour episodes with a full disc documentary. Scott has taken care to ensure that this set stands alone meaning that all new listeners need to know is that Dorian Gray is real and the Oscar Wilde novel is a true story. Anything else is covered in these adventures, which have adult content and are not intended for younger listeners.

Unlike previous series, all eight stories form a loose narrative and are set in the present day (previous sets ranged across history). The confessions style is also gone and these are dramas without being presented as reflective confessions.

While there is a story line, it doesn’t dominate until its conclusion in the final two stories. The first six tales are from a range of writers and provide a kaleidoscopic variety of insights into what it means to Dorian to be immortal. Across the whole set he encounters stalkers, fortune tellers, creatures of fantasy, vampires and much else. Alongside is the character of Victoria Lowell (Tracey Childs) who makes no bones about using Dorian for her own advantage.

The stories are peppered with a whole host of great characters played by Big Finish regulars including Nicola Bryant, Terry Molloy, Barnaby Edwards and Laura Doddington. Mention should also be made of the characters of Luke Glass (Blake Ritson) and Tobias Matthews (Hugh Skinner) who both keep Dorian busy as the tales weave their way towards the grand finale. 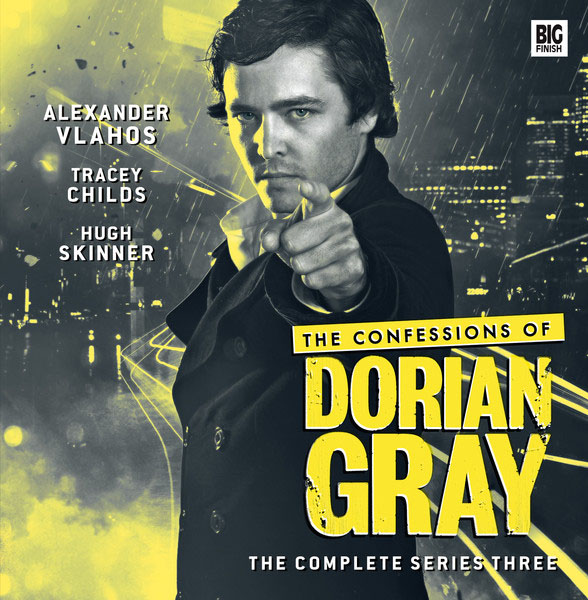 The stories are all atmospheric and evocative directed with a great sound design by Neil Gardner. There are many great performances including Tracey Childs manically driven manipulatrix (if that’s a word!) but none top Alexander Vlahos who plays Dorian with an amazing vulnerability, rarely the master of events, keen to do the right thing but also keen to have a simple life.

Despite his origins, lifestyle and immortality the listener identifies strongly with the challenges Dorian faces. At no stage does his almost unique lifestyle leave him unhuman. He may not always be very likable but he is a fully realised, three-dimensional character.

The eight stories all add different things to the mix and the set as a whole would appeal to anyone with an interest in darker stories. At the pre-order price, in particular, this is an astonishing bargain.

There is only one question left – will there be a fourth series, and when will it be available?!

What did you think of Series 3? Let us know below…