This is perhaps the great, untapped goldmine of the horror genre; tragically, with this month’s release of the deceptively ace-looking Knight of the Dead, this splendid premise remains in the mire.

As is the way with all the dodgy budget knock-offs of bigger (better?) films, writer-director Mark Atkins’ movie comes with the tagline “Black Death was only the beginning”, so you get the idea – swords, sorcery, sex and, erm, staggering undead hordes coming over the horizon. What could be better?

Well, almost anything, actually. The aforementioned hordes are a few blokes presumably herded out of the local with the promise of free booze for a few hours in bad make-up, the actual actors don’t seem able to even say one line adequately and the overall feel is of interminable boredom leading to deep despair. Perhaps worth watching for the hilarious sight of a medieval knight removing his armour to reveal very modern t-shirt tan-lines, otherwise, stay away from this like the plague (arf!).

Much more enjoyable, though still with its iffy moments, is the superior anthology pic, Sanitarium. With a few familiar faces cropping up, including Malcolm McDowell and Robert Englund sleepwalking until payday, alongside underrated character actor John Glover, this set of three tales from a mental health institute is significantly darker and less jokey in tone than normal.

The stories look at a puppeteer who believes his puppets are evil, Lou Diamond Philips as a conspiracy theorist who may be right and by far the best: the oddly moving story of an abused child who lashes out at his tormentors with the aid of a helpful demon. Though uneven, the surprising emotional impact usually missing from these kinds of hastily cobbled together collections somehow elevates Sanitorium above similar films. 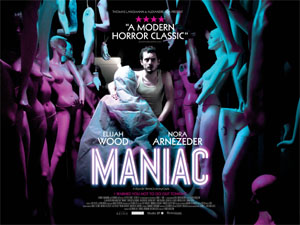 Campos’ film is less straightforward slasher than mentally troubling look at an outsider’s motivations for amoral behaviour. Brady Corbet plays the titular graduate who goes on a long holiday to get over a romantic break-up; as we see his gradual deterioration, the audience is led into a bleak inner world. With some effortlessly stylish direction and captivating electro score from Saunder Jurriaans and Danny Bensi, Simon Killer is a classy journey into darkness.

Less subtle, but equally visually and sonically entrancing, is director Franck Khalfoun’s Maniac. Elijah Baggins, erm, Wood continues to carve out a career as pointedly far away from Hobbiton as possible with his role as Frank, the mannequin collector who provides wigs for his dummies from real women.

Frank also becomes fixated on a French lady (what do these killers have against the French?) who invites herself into his life to look at his charming hobby.
Filmed almost entirely in first person perspective, we barely see Wood’s face, though the end result is a brilliantly immersive thrill-ride with that rare delight for these desensitized eyes- genuinely horrific, flinch-inducing scenes.