On every wall, on every desk, in the palm of every hand – in the area between delight and discomfort – Black Mirror is back, and it’s just as powerful as ever.

It posits a world in which each interaction we have with another person is rated, to the point that each individual has been ranked and qualified to a single decimal point. In keeping with Black Mirror’s mission statement, what we’re seeing here is a sharp satire on the world as it is now, and how it could end up if we’re not careful.

There’s something very easy to relate to about this story, and how it portrays the complicated social conventions of this world; as with all the best Black Mirror episodes, the juxtaposition of the mundane and the extreme engenders both horror and familiarity, making the story resonate on an even deeper level.

Rashida Jones, who wrote the episode based on an idea from series creator Charlie Brooker, does an impressive job of contrasting Lacie against other characters, building a fuller picture of this world; bit by bit contextualising the points system, meaning that the titular nosedive is all the more painful to watch unfold.

It’s a very stylishly presented piece of television as well; director Joe Wright did an impressive job with the cinematography of ‘Nosedive’, but also made some clever aesthetic decisions that made the episode even more impactful. 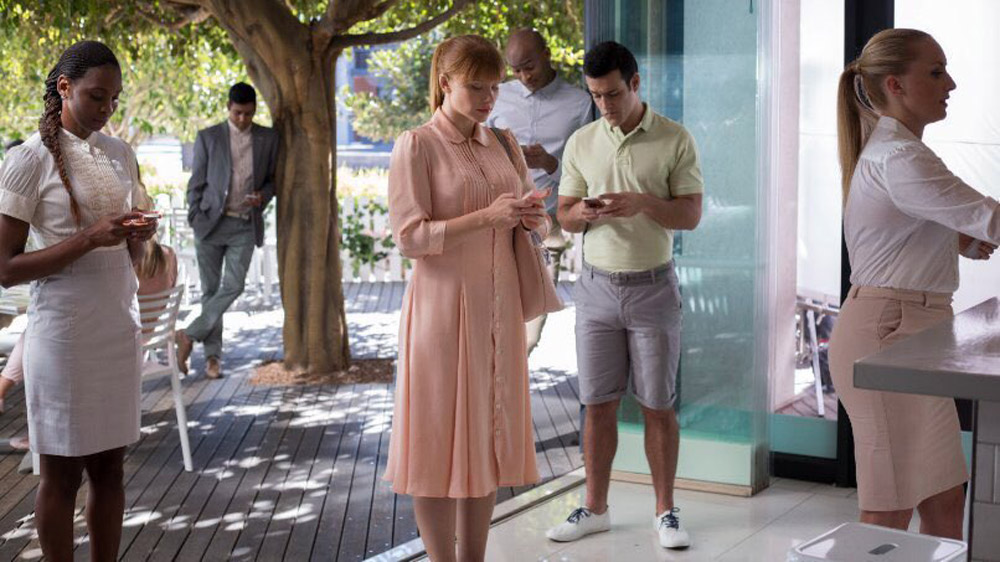 There’s a subtle pastel colour scheme throughout – Bryce Dallas Howard spends much of the episode in pale pink, but there’s also lots of greens and blues – which are used to reflect the stratified nature of this society. Further, there’s the sterile whites of the wedding that contrast with the dingy greys of Lacie’s prison cell; all aspects of ‘Nosedive’ have clearly been very well thought out, approached with such precision as to create a genuinely stellar piece of television.

In many ways, it’s the episode’s closing moments which are the most powerful. Lacie has been locked away, and removed from society at large; her meltdown at the wedding finally pushing her social score below a 1. True, she finds a freedom of sorts, having the first genuine and unfiltered interaction with another human being – but it’s still from a point of confinement, albeit now literal rather than figurative.

There aren’t any answers at the end of ‘Nosedive’, only questions. There is no definitive statement as to who ends up best – is it Lacie, stuck in her cell? Is it Naomi, with her perfect wedding and 4.8 score? Or is it perhaps the people Lacie met along the way, living comfortably in the middle? You can argue for any of them, really – but you wouldn’t necessarily be right.

One thing can be said for certain, though: ‘Nosedive’ is an extremely strong debut for Black Mirror on Netflix, worthy of a full five stars.

Available from Friday 21 October 2016 on Netflix.

What did you think of ‘Nosedive’? Let us know below…