Pepys Road is a seemingly ordinary street in South London until the residents find themselves continually plagued by incessant postcards; postcards with one single message: WE WANT WHAT YOU HAVE.

This threatening thread runs throughout the episode slowly escalating as the story develops. Writer Peter Bowker has created a strong adaptation and lovingly imbues his script with layers of characterisation to compliment the central mystery. 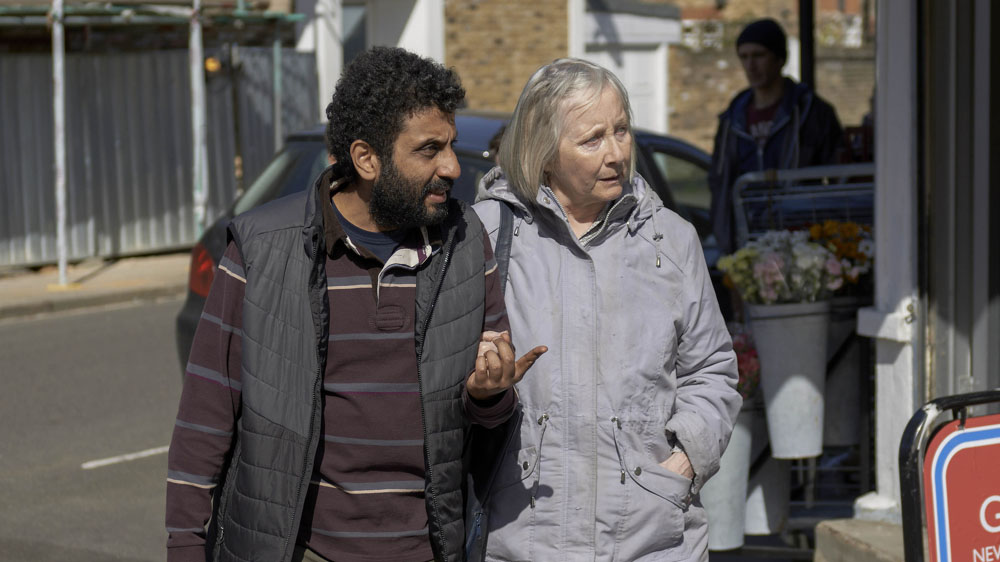 Gemma Jones particularly impresses as Petunia, an elderly resident living at No. 84, Pepys Road, in a heartbreaking scene where it is revealed that she has a large brain tumour growing inside her. It’s a wonderful performance which skillfully conveys Petunia’s emotions as she takes in the terrible news given to her.

Impressive, too, is Toby Jones who stars as Roger Yount, a highly-paid investment banker. For the most part Roger appears to be an ordinary middle-class resident on the street with his family and his job but it soon becomes clear that Roger is dissatisfied with the direction his life is taking. Toby Jones lights up the screen and is eminently watchable as he portrays Roger’s unfolding internal struggle.

Where Capital succeeds the most is in portraying a world full of characters separated by class and status but who are ultimately far more connected than it might initially appear. Bowker’s script is a highly intelligent piece of writing that asks a number of interesting questions but it’s the cast that really makes this production work.

In lesser hands these characters could have failed to capture the essence of the story being told but nobody here gives less than 100%. From Utopia star Adeel Akhtar’s captivating turn as corner shop owner, Ahmed Kamal to Wunmi Mosaku’s portrayal of traffic warden, Quentina, the cast put absolutely everything they can into their characters.

It’s difficult to find a criticism here as not only does Capital capture the core themes of greed, capitalism and envy with aplomb it also manages to be exceedingly entertaining whilst doing so. It’s not all drama either as Bowker’s script crackles with wit and fabulous dialogue.

Overall, Episode 1 is a brilliantly-paced piece of television that takes its time in building its world and the characters that inhabit it. As the WE WANT WHAT YOU HAVE campaign mounts up, so do the various struggles of each character and these threads are intricately woven together into one mesmerising hour of drama.

What did you think of Capital? Let us know below…