At first glance, this penultimate instalment of Crazyhead would appear to be business as usual.

There’s the usual display of cheekiness, intelligent wit and endearing character work, but it hardly feels like its building to any huge revelatory crescendo. But whilst ‘Downward Facing Dog’ doesn’t exactly shake everything to the core ready for the big finale next week, it does succeed in providing plenty of intrigue and suspense.

The main crux of everything this week is the mysterious presence of Harry (Charlie Archer), who’s spent most of the last two episodes hiding in shadows or chatting up Raquel. Bringing him to the forefront, Howard Overman’s script wisely keeps us guessing right up to the final scene.

Is Harry a good guy? A demon nasty? When the final scene confirms Harry is in league with Callum after all, it’s fair to say we’ve been misled in the best possible way up till now.

Harry’s interest in Raquel certainly drives a wedge in her blossoming friendship with Amy, and Overman makes good use of this plot point, exploring Amy’s grief over Suzanne’s death. We get to see Amy and Raquel at loggerheads this week, highlighting Amy’s overprotective nature and Raquel’s low self-esteem, all of which coalesces into some great drama, ably performed by the ever-excellent Cara Theobold and Susan Wokoma.

Speaking of great performances, once again Tony Curran steals the show as the villainous Callum. His comic timing is on top form, especially in the ‘circle of trust’ scene, but throughout the man lights up every scene he’s in, whether it be a moment of explosive violence or a more restrained, menacing moment like the one he shares with Raquel in the psychiatrist’s office.

Charlie Archer skilfully weaves between sinister and adorable as the enigmatic Harry, whilst Lewis Reeves as Jake also gets some of the best lines this week – his pathetic displays of jealousy and overbearing interest in Amy finally giving way to a braver, friendlier side that is frankly more befitting the character. 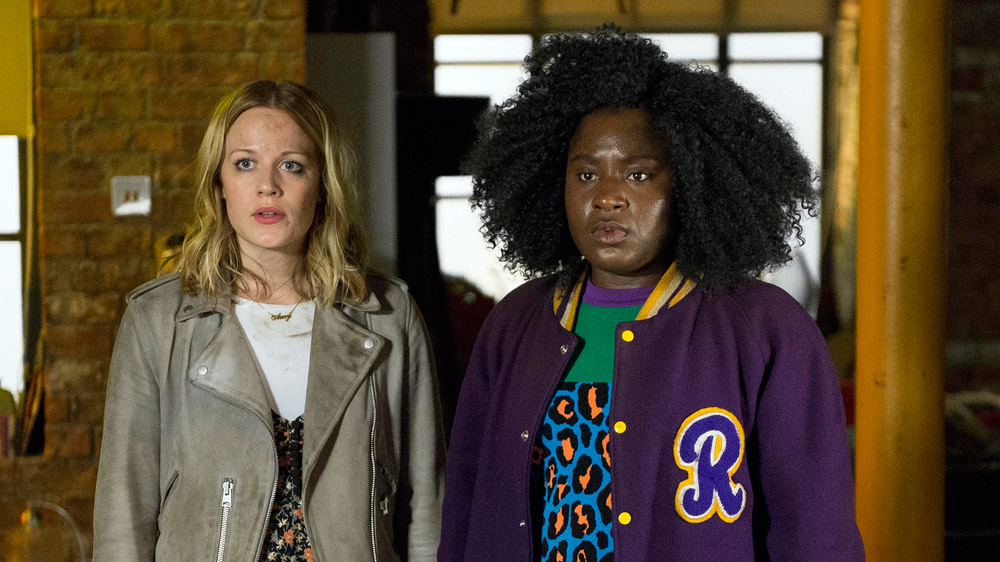 As episodes of Crazyhead go, this is certainly one of the strongest ones yet – director Declan O’Dwyer manages to eke out a couple of genuine scares, whilst the comedy hits all the right notes, from the monologue spouting henchmen to that hilarious Beyoncé line.

There’s also an interesting tease for future instalments, when Callum casually drops in a mention to a ‘major bitch’ who Raquel first got attached to before Amy came along. Who is this former friend? Consider us hooked – we’re hoping for an answer next week.

All in all, ‘Downward Facing Dog’ IS business as usual for Crazyhead.

But that is no criticism whatsoever – in fact, the episode is easily the best one yet. Everything that has made the series so unmissable thus far is present (the wit, the comedy, the clever and subversive take on genre clichés) but there’s also tons of interesting and engaging character development stirred in for good measure.

The interesting twists are just the cherry on top of what is a delicious slice of unmissable fantasy TV.