Brighton is a city that is difficult to get a bead on.

It’s either the unkempt town notoriously savaged by a ‘Sun Says’ column a few years back, or it’s the cheerful, brightly coloured party trick beloved of hen parties and misfits.

Most of the time, of course, it’s both at the same time. So it is with BBC One’s Cuffs, which veers from bawdy gag (a stag party upsetting the nudist beach) straight into a nasty racist attack with barely a pause for breath.

A quick moan about the title: was Cuffs really the top of the list?

Previously, police dramas have been named for their lead character (Dixon Of Dock Green), a bit of slang (The Bill, Z Cars) or a cute gag on the then revolutionary concept of a police drama being headed by a woman (Juliet Bravo).

Cuffs seems a bit of a punitive name: it assumes that the public are the enemy, deserving to be locked up, and that the police are defined by their power to throw away the key.

Perhaps that’s deliberate: this is a drama that is unashamedly on the side of the force, understaffed and unappreciated, working against the odds to bring in a result. One almost throwaway scene involves genuine heroism from a Community Support Officer and a neighbourhood PC (Bhavna Limbachia), doing their job in a very dangerous situation with no back up. 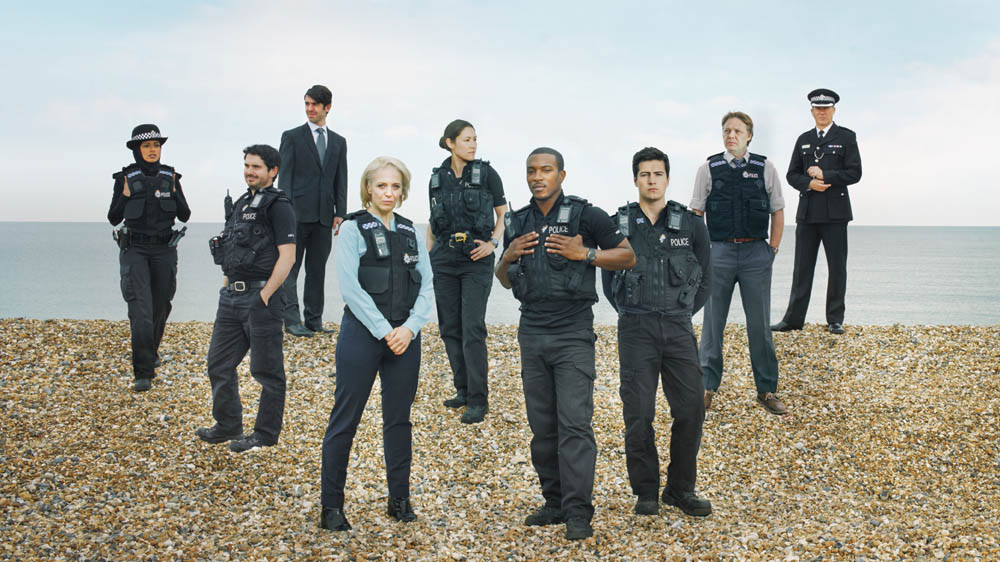 Rounding out the top end of the cast is Ashley Walters as Ryan Draper, convinced that all police officers can be sorted into three basic types (fighters, speed freaks, and bed wetters), and tasked with babysitting new boy Jake Vickers (Jacob Ifan), who may have only got the job because he’s got ‘a dad with stripes on his sleeve’.

Arguably the most recognisable name is Sherlock star Amanda Abbington as DS Jo Moffat, who handles an occasionally hackneyed storyline (a secret affair with her Divisional Commander) with steely intelligence. DCI Jane Tennison never had to put up with this sort of nonsense, and we hope that Abbington will be able to show us who’s boss very soon. 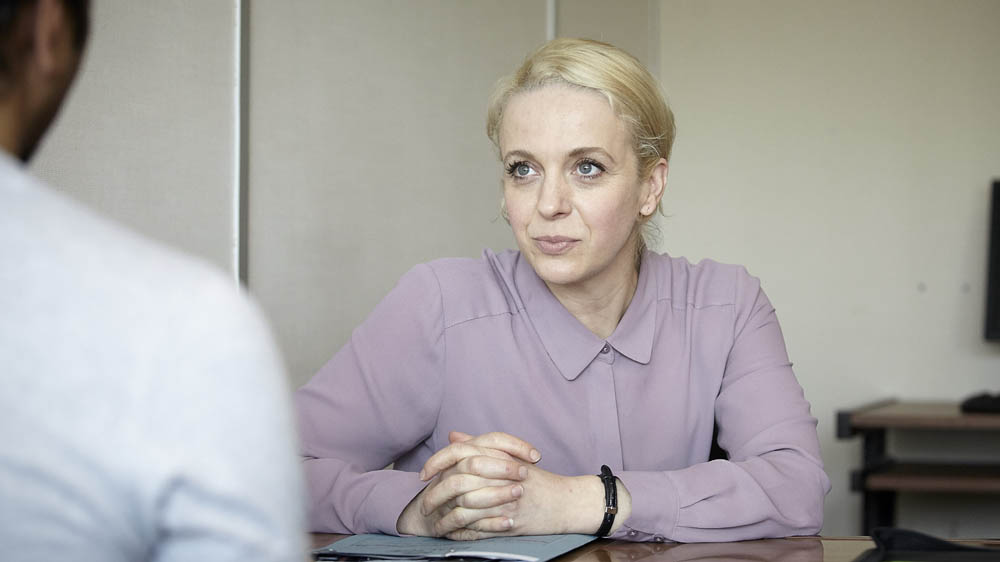 Brighton itself is the other star of the show, and looks very good on screen.

The episode begins by sweeping in from the sea, over the pier (the allusion to The Lost Boys may or may not be deliberate) and it’s a reminder that for a city with so many varied locations, Brighton is one of the UK’s most recognisable cities aside from London and Liverpool, and as such, is surprisingly underused in British drama (although locals should resign themselves pretty quickly to the fact that this programme’s cop cars can jump between entirely unrelated locations within the gap of a siren’s wail).

Whereas The Bill was set in an anonymous London suburb, Cuffs is unmistakably Brighton: from cheerful candyfloss to depressed druggies, from dreadlocked hippy-crits to shady massage parlours. Even the infamous Brighton Argus headlines get a cameo role. 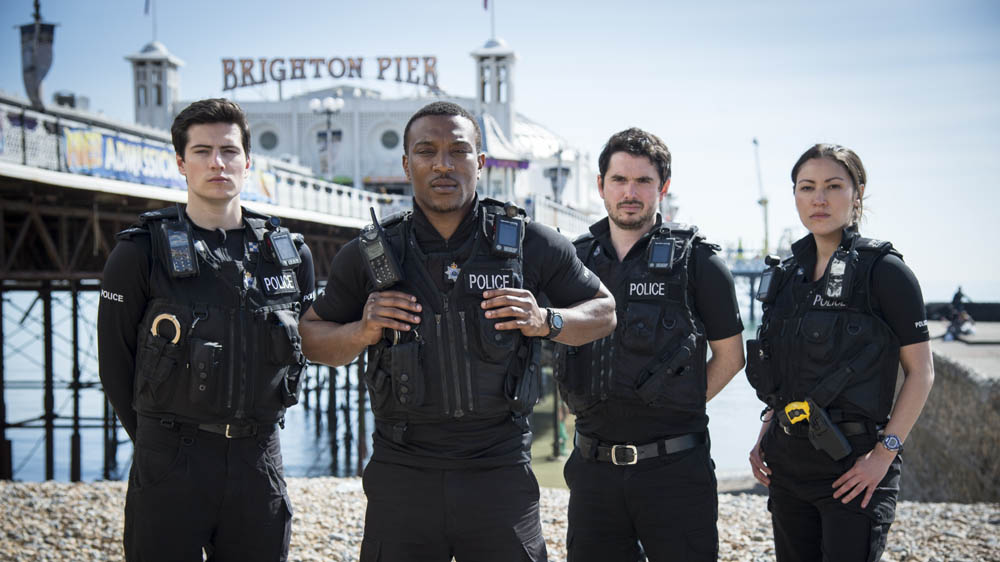 ‘Seriously, what’s the point of you?’, mutters a nakedly disappointed member of the public at an early point in the episode. It’s a complaint repeated almost verbatim by Amanda Abbington’s character less than half an hour later. It’s certainly a bold question to keep asking in the very first episode of a brand new cop drama, particularly as it’s difficult to get an ID on what sort of show Cuffs is going to be.

Apart from anything else, this episode has the job of introducing us to all the main characters as well as hinting at their backstories – something which it does admirably well, and does at least suggest that from now on, with all the introductions out of the way, it will have room to be bolder and wittier.

There’s great promise in a sequence where new boy Vickers is hopelessly out of his depth and without direction, culminating in a scene that wilfully contrives to dovetail with another, entirely unrelated storyline. 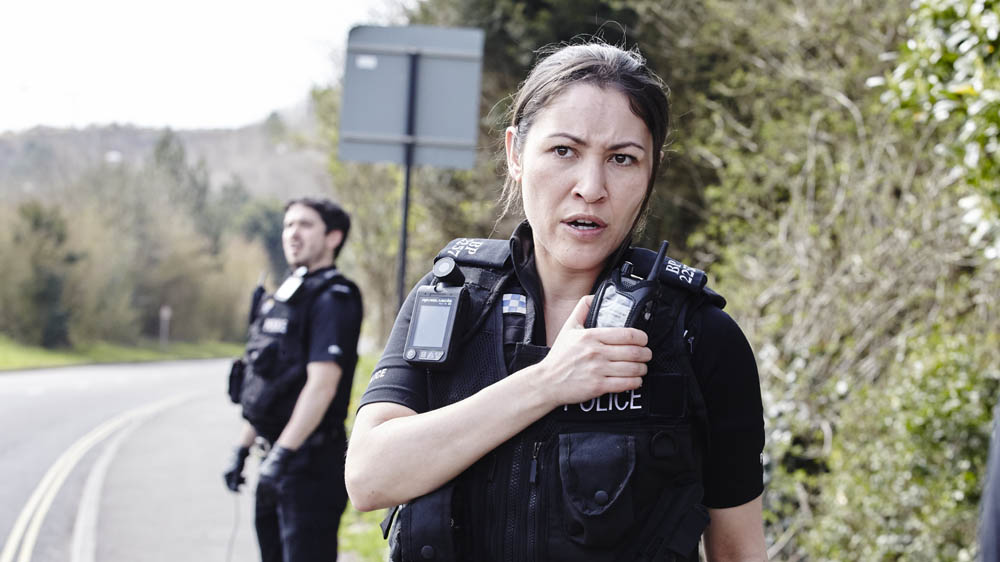 Cuffs currently seems a little too broad and brash to be a truly adult drama – although it’s probably not aiming to be, airing in the midweek 8pm slot vacated by Waterloo Road – and yet there’s real attention to detail in the nuanced performances. The characters are charismatic and well-drawn, and while the storylines are not yet as original as you might hope for with such a varied setting to play in, the cast really sell the dialogue.

Plus, it’s genuinely fun to see Brighton on screen. This opening hour of Cuffs certainly arrested our attention.

Are you looking forward to Cuffs? Let us know below…