We were worried. We were scared that Steven Moffat had finally overreached himself and that ‘Let’s Kill Hitler’ might be as disappointing as the conclusion of the otherwise majestic ‘A Good Man Goes to War’. We were wrong.

Picking up a few hazy summer months after that strangely numbing mid-series finale, a bombardment of instantly iconic imagery – the Mini-made crop circles that spell out ‘Doctor’; the borrowed Trans-Am screeching to a halt in front of the TARDIS; and Amy’s childhood friend Mels, a gun-toting vision of gorgeousness who gets all the best lines (all the pointers to her true identity are there from the off) – sends the episode hurtling off at not only the usual breakneck pace but with renewed vigour, the TARDIS smashing through the window of Hitler’s office in 1938 and preventing an early assassination bid by an S.S. officer who is actually a robot filled with ‘miniaturised cross people’ from a time-travelling justice department. But that’s just for starters.

Rory (who is brave, inspired and witty throughout – a million light years from the neurotic nurse he was at the beginning of Series 5) snaps, ‘Shut up, Hitler!’ and locks the Führer in a cupboard. Meanwhile, Mels (no, we didn’t spot it until it happened, either, not even at, ‘Oh, cut to the Song’) turns out to be Melody Pond and a stray bullet in the guts causes her to regenerate into the physical form of Alex Kingston.

It seemed such a letdown before the summer to discover that River was Amy’s daughter; too obvious and unrewarding. Now that the knowledge has properly sunk in, it works – and a lot of other things do too, as Steven Moffat untangles the myriad dangling plot strands with the consummate ease of a practised puppeteer unpacking his marionettes before a big show.

And what a show it is. After a rush of the kind of staccato, bullet-time exposition scenes much beloved of Sherlock, River does just what a bespoke psychopath brainwashed and bred to kill the Doctor ought to and kisses him to death. Then she jumps out of a window, banters with some Nazis – ‘I was on my to this gay, gypsy bar mitzvah for the disabled when I suddenly thought, “Gosh, the Third Reich’s a bit rubbish, I think I’ll kill the Führer.” Who’s with me?’ – and then blasts them with a dose of regeneration energy. 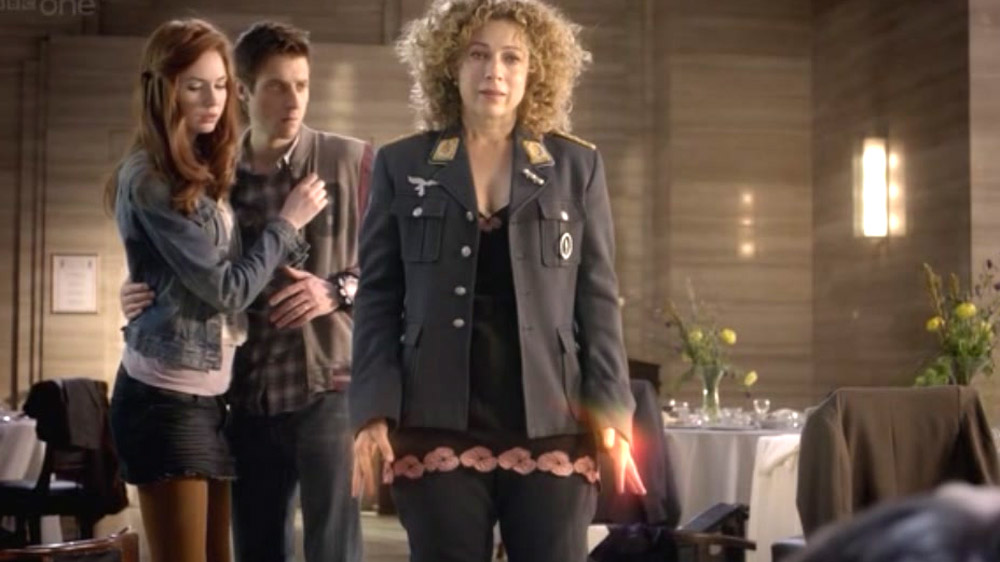 As Amy and Rory give chase, the dying Doctor crawls into the TARDIS, has a brief, Witches of Eastwick moment with some leftover promo cutouts of Billie Piper, Freema Agyeman and Catherine Tate before howling: ‘There must be someone left in the universe I haven’t screwed up yet!’

There is. It’s the young Amelia Pond, who helps him via the ever-reliable fish fingers and custard (has Jamie Oliver copyrighted this yet?) out of his fugue and into a top hat and tails to deliver the show-stopping line, ‘You say she killed the Doctor… Doctor who?’

Matt Smith may teeter on the brink of overacting at times (there are occasions when he seems to inhabit the face and limbs of a young Jim Carrey) but his amping-it-up-to-eleven exuberance is always balanced by a more reflective side. ‘Help me save Amy and Rory,’ he pleads with River as he lies expiring on the floor.

Stunned and impressed by his stoicism, River not only saves her parents but also gives her remaining regenerations to save him as well with the first and last of a million ‘Hello Sweetie’s. Everything from the past and the future fits together as if Moffat planned it this way from the moment he started writing ‘Silence In The Library’ – and if he didn’t, who cares?

It’s not perfect (Amy would surely not be so content with the Doctor’s insistence that they have to leave their daughter to make her own way in the universe), but nothing genuinely wonderful ever is.

‘There can be no true beauty without decay,’ Bruce Robinson once wisely pointed out, and it’s the tiny flaws that give life to the wonder perfection cannot. ‘Let’s Kill Hitler’ is as wondrous as anything you’ll see on television this year.