It’s been announced that ITV’s Victoria is getting a Christmas special in December 2017, but Poldark is the drama that’s bold enough to bring you Christmas in October, just like all the big shops do. No Christmas trees though, because as history buffs will know, Prince Albert hasn’t brought them to ITV yet.

Unlike at your nearest supermarket, the festive goodies are being kept out of sight in Poldark: Demelza’s so worried this’ll be Ross’s last Christmas for a while that she’s squirrelling food away in a secret space, much like a squirrel would do. Meanwhile, against her wishes, her husband’s doing the same; bunging barrels of contraband under the floorboards, all so he can fill his ‘Keep me out of debtor’s prison’ jar. It’s a big jar.

To use the proper financial terminology, Ross is really on his arse this week. And yet he’s oddly inured to the idea of having to leave his wife and rarely-seen child and go live in debtor’s prison.

He’s too busy smouldering at the bereaved Elizabeth and making his own financial sacrifices trying to keep her solvent. It’s another one of those vexing Ross-isms that straddles the boundary between noble and reckless, and veers toward the latter given Ross’s breeches-tightening attraction to Elizabeth. It wouldn’t be so bad if he wasn’t consistently ignoring his own wife, but there’s more than simple restitution at play in selling off his Wheal Leisure shares and anonymously giving the profits to Elizabeth, even if Ross himself won’t admit it.

Maybe she could use some of the money to buy a better portrait of Francis, because that one she currently has looks nothing like him. 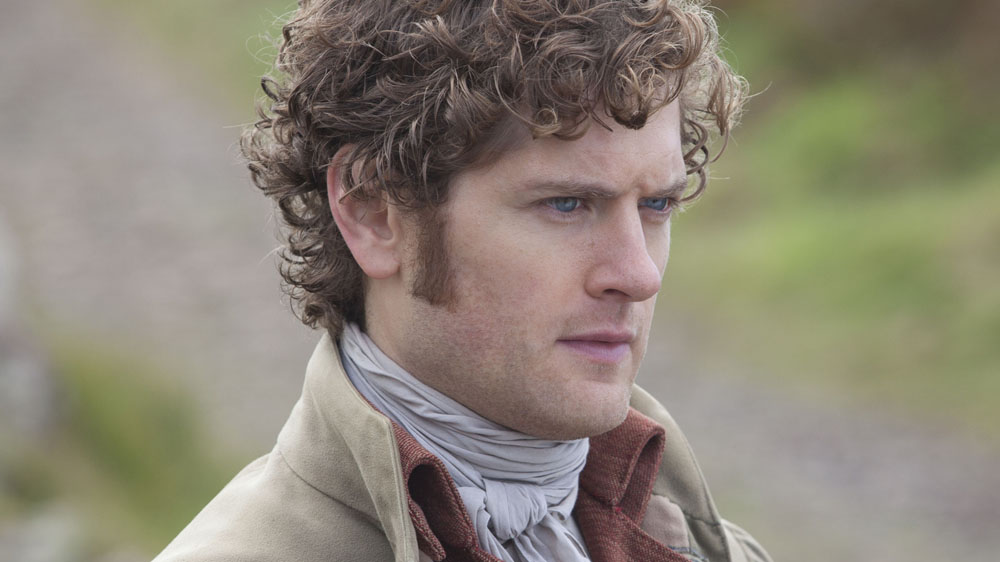 Ross isn’t the only one whose concentration is fixed on the Lady Poldark. George Warleggan’s popping around with fancy sweets like an 18th century Milk Tray man, if the Milk Tray man took the time to quietly insult your great aunt and dangle a massive bill in front of you after dropping off all nine – count ’em! – pieces of confectionary. I know sweets are a rare delicacy in the 1700s, but come on, there better be another layer below that lot George, and none of them better be nougat. No wonder he’s not getting far with Elizabeth. It’s like watching a corpse flirt.

Speaking of! After a body washes up on the beach, Dr. Enys takes out his travel-sized hacksaw and – in a scene I wish to god had been featured – carts a dead man’s leg home to examine it (I imagine he either held it by the foot as he strolled home, like a big meaty walking stick, or perhaps gripped it awkwardly under his coat as one would with a particularly large beef joint shoplifted from Sainsburys).

What does Dwight do with the rest of the body? Bury it as promised? But then what does he do with the leg? Does it get a separate grave? Can we find out on the DVD extras please?

It probably doesn’t matter. The good news is that he uses it to find a cure for Rosina Hoblyn’s hobbling, all through the power of modern analytical science. You hear that, Dr. Choke? You and your leeches can take a hike. Dwight’s here and he’s only about three more washed-up corpses away from beating Aneurin Bevan to creating the NHS. 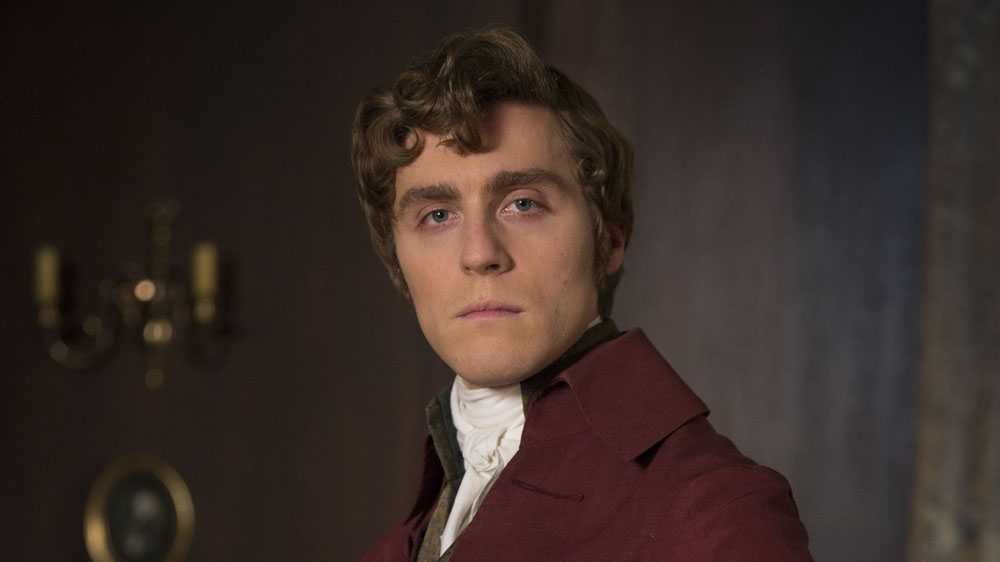 Super-Doc Dwight’s day gets better as he and Caroline are reunited and enjoy a beautifully shot horsey race. Her Uncle Ray (John Nettles) isn’t best pleased. Ooh no. But then he does seem like a humourless sort. At one point Caroline asks him if he ever put money into Ross’s copper venture, to which he replies ‘I made a minor investment’, thus passing up the open-goal opportunity to make an excellent minor/miner pun: ‘I made a miner investment…WINK…har-har-harrr! Pass the port please, etc etc’. Up your game, Penvenen.

His word-play may be sorely lacking but he’s not short on words when he summons Dwight for the politest argument in history. It’s terrifically well-written. I don’t know whether it’s from the books or is it new dialogue, but no matter which, it’s either a reminder that this show is working with great source material, or that Debbie Horsfield has turned out another strong script. Luke Norris and John Nettles perform it with plenty of bite beneath the enforced pleasantry.

A telling off from a rich old man won’t dissuade Dr Dwight from pursuing Caroline, and she seems smitten with him too. But at the same time her attention is also enough on Ross that she’s willing to buy his debt and save his arse. 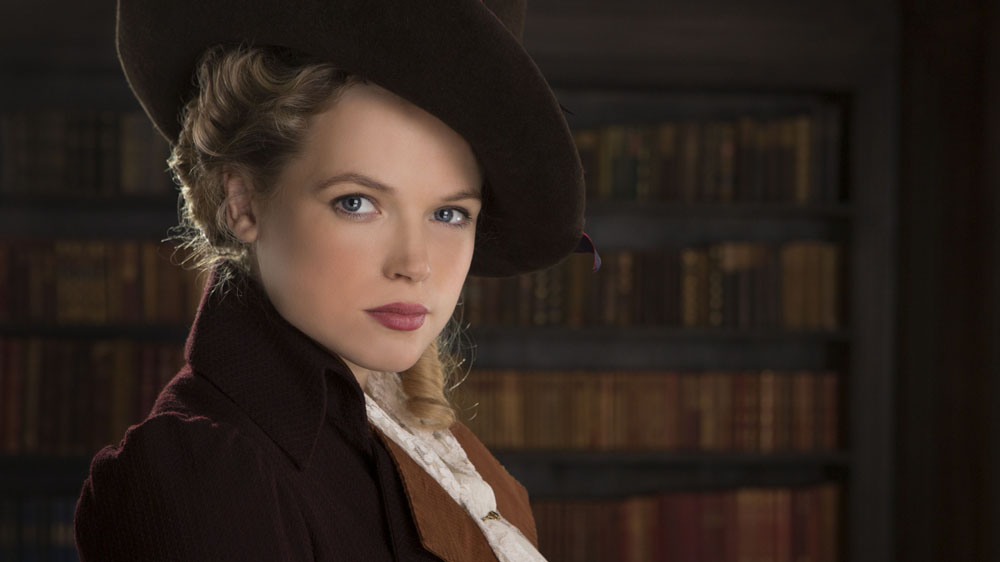 I can’t quite figure Caroline out, and Gabriella Wilde’s performance quite rightly gives nothing away. Does she fancy Ross also? Is she trying to have her cake AND have sex with it? Or have sex with another cake? Or is it simply a favour for one of Dwight’s friends? Thank goodness there’s still 4 episodes left to find out.

His irons again pulled out of the fire at the last minute, it’s a Merry Christmas for the Poldarks. Ross gives Demelza her Christmas present. It’s stockings. Typical bloke, buying lingerie for his missus as a last minute gift. But what follows (and sorry to sound like The Daily Mail for a second) may be the steamiest scene ever in the show, as he puts them on for her.

And yet, as always in Poldark, even the sexiest scenes are so well shot that they’re arousing and inviting without ever making the viewer feel like they’re watching through a crack in the door.

Sex follows for them, but it’s the credits for us. That’s fine, I had a headache anyway. Probably brought on by trying to work out if Dr. Enys buried that leg separately.