So that’s it. Silk has taken its last bow with an ending that wasn’t quite as conclusive as creator Peter Moffat had hinted.

Clive is head of chambers, Jake is back at Shoe Lane, Billy’s secret is out, Mickey Joy is (presumably) sleeping with the fishes and Martha – well, who knows. She vanished in the last few seconds as a bus passed in front of her. It’s a visual trick that’s been done to death, but it was still a bit spooky.

Her disappearing act was the disastrous result of Martha letting her heart rule her head when it comes to clients, something which this series had been signposting from the off. Her defence of former flame Sean McBride went pear-shaped as she missed a vital clue that would have got him off a murder charge. It was Mickey, haunting the episode in a cloud of smug, who dropped the bombshell and urged Martha to “run for your life”.

Martha’s floundering in court was sad to watch. It was hard to believe that the same brilliant, fiery QC, who inspired hope in clients whenever Billy mentioned her name, was being bested in almost all her cross-examinations, resorting to dramatics to reassure herself that she was doing the right thing. It was like she’d had a personality transplant from Episode 4 onwards.

We didn’t even get to hear her speech in application for the head of chambers position. That could have been a great Braveheart moment: an empowering, defining, inspiring monologue with the heroine emerging victorious. Maxine Peake would have smashed a moment like that. This episode would have felt satisfyingly final as a result, and make the ending come across a little less weak.

Instead slimy Clive and his Cleopatra, Harriet, will rule the roost – and Shoe Lane won’t be dealing with defence at all going forward. With the vanishing of Martha Costello, perhaps this was fitting. If only she’d gone out with a bang instead of a bus.

What did you think of Silk‘s finale? Let us know below… 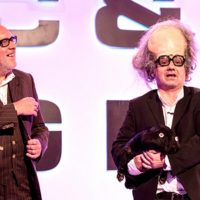 Vic and Bob have a movie on the way