“So treat me here, if you’re so worried about it. Hospitals are for sick people”

Viewers tuning into the third episode of ITV’s The Good Karma Hospital might not have been altogether prepared for what greeted them. For barely had the episode begun before Neil Morrissey made a cheeky appearance, (reminiscent of a memorable James Nesbitt moment in Cold Feet), viewers getting a rear view of him as his character, dressed in a kitchen apron – and nothing else – prepares breakfast for Lydia.

But Dr Fonseca has no time for breakfast or a one-to-one talk, what with an abandoned baby on her doorstep, “Not again”, and some important plot exposition at the hospital. “Today is…the festival of Holi, the day when the entire adult of this state behaves like children for 24 hours” which invariably leads to “abject bloody chaos”

Plot setup done, Dr Fonseca leaves Dr Walker holding the baby in more ways than one as a young man called Sunshine (ironic given all the moons on display) takes her on a house call to an old acquaintance, reclusive eccentric ailing naked hippy artist Desmond, (Clive Russell) with not even an apron to cover his modesty & with only Jimi Hendrix for company. Jimi Hendrix his pet monkey that is. “Out of the two, the monkey is the easiest to deal with.” 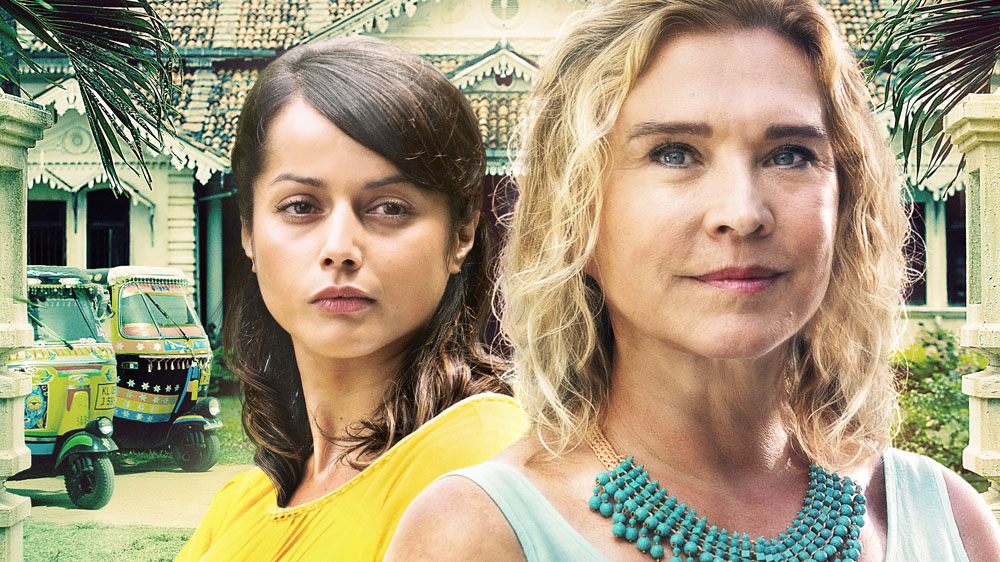 But after this light-hearted Sunny start to the episode the mood soon starts to darken.

There’s not going to be much of a happy Holi-day for the characters. The baby’s young mother is found but there’s no heart-warming mother & child reunion as the authorities & the young mother’s parents get involved, leading to a painful confession from Ruby about her past. Desmond’s failing health leaves him facing an uncertain future that his estranged straight-laced son wants no part in – “A man I hardly know expects me to drop everything to take care of him.”

Even Maggie and Paul’s ‘high’ spirits at a colourful Holi parade soon fade as the grim reality of her condition sinks in. Comic relief is provided by the so far underused AJ whose latest holiday romance lasts longer than he expected; “The Gods usually make sure they get back on the plane.”

Despite the frivolous start to the show which might have struck a bum note with some viewers, Episode 3 was an cosily entertaining hour of TV drama and at least, unlike its BBC One 9pm rival, you could hear what the characters were saying – even if you saw a bit too much of some of them…

Buy The Good Karma Hospital on DVD on Amazon here.