Scandal. It’s a big, juicy, prickly word, especially when you preface it with ‘sex’.

And that’s just what we have here in The Scandalous Lady W, a sex scandal from the yellowed, mysteriously stuck-together pages of history, thrust onto TV in typical BBC period costume glory.

Natalie Dormer (a keen participant in Games to do with Hunger and Thrones), is an alluringly lusty and confident Lady Worsely, newly married to Sir Richard Worsely (Shaun Evans, often seen Morse-ing around on Endeavour), a complicated man that it never quite feels we get close enough to understanding.

Y’see, Sir Richard’s a man who enjoys watching through the keyhole. Not the show (and certainly not the Keith Lemon version), but peeping at the keyhole of his own bedroom door, as his wife has intercourse with friends he has recommended over the dessert course.

He encourages her to have sex with other men, and when she eventually runs off with one – the handsome Captain Bisset, played by handsome Aneurin Barnard (Cilla) – he suddenly throws a hissy fit and decides to throw court proceedings at everyone. Too much of a wuss for a duel, Dickie?

Flitting back and forth across the latter part of the 18th century, we move from hot bedroom action to body-temperature judicial action. The Scandalous Lady W is a court case wrapped in sex-streaked sheets, with the odd titillating tit-bit tossed in, more through talk than action, which may annoy the prurient period pervs among you, but make you grateful if you’re watching with your mum.

Advertised by the BBC as a ‘feature length’ drama, its camera-work is careful enough that no one’s length is featured. Actually it’s very chastely shot for a show centred around so much fucking, and certainly nothing to rival Natalie Dormer’s bedroom antics in The Tudors. There’s loosened breeches and shiny post-coital grins, but most of it’s in your head, by way of your ears. A riding crop constantly crops up, only to be used as a prop for us to infer about nights of midnight thwacking and bruised buttocks.

It’s a story centred around the giggling, bedpost-gripping, sweaty vortex of sexual indiscretion – or ‘rantum-scantum’, as it’s called back then – and in it, among the sheets, there’s a good message about a woman’s worth once married. But beyond Lady W’s smirks that aspect of 18th century female empowerment feels a little lost below the metaphorical dick-swinging in and out of court. 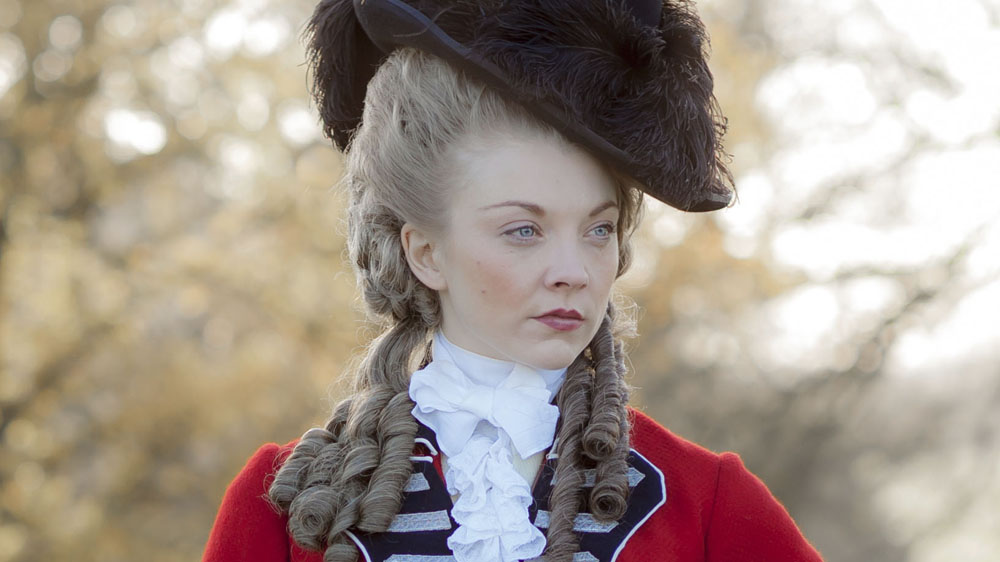 David Eldridge’s script is very well-structured and never feels dull or bogged down in courtroom bluster, but the dialogue is period costume standard with the odd bit of ‘Carry On Poldark’ rudeness tossed in to liven it up. Aneurin Barnard, who always looks like he’s trying so hard, manages to say ‘I’m a slave to your quim,’ without allowing his handsome features to secede to a Charles Hawtrey pucker or a Sid James chortle, while every so often a phrase like ‘mutton-monger’ and ‘He has us by the nutmegs!’ will rouse you from absent-mindedly gazing at the lovely costumes.

Lady Worsely, or ‘Lady W’, was scandalous for her time (although she hardly gives Moll Flanders a run for her money), but scandal is relative. We’re not so easily shocked these days. We’ve been inoculated by the tabloids and the Internet; inured to all but the most graphic details.

The Scandalous Lady W does a good job of communicating what was once taboo and why, but it doesn’t feel like it’s even trying to shock or titillate the modern viewer. But then maybe that says more about us as viewers than it does about a competent BBC Two drama…

Are you looking forward to The Scandalous Lady W? Let us know below…