This week our go-getters are looking to branch out in order to supplement their incomes. This is the entrepreneurial 80s, after all… Though their style is much more Del Boy than Saatchi & Saatchi.

However, before we’ve even got to really enjoy Billy Joel’s My Life, the tune that opens the show, Vincent is taking a break from building his barbecue to launch into one of his self-aggrandising monologues. Quickly, we’re under no illusions that these are the same awful bunch of guys we left at the end of episode 1. Did we ever expect anything else, really?

I doesn’t appear that we’re going to get a lot in the way of character development during the course of White Gold. The modus operandi of The Inbetweeners was consistent, reliable unwillingness/inability to grow up, and the characters here show a similar lack of enthusiasm for change. This, if you disliked the first episode, this isn’t going to change your mind.

The gang’s choice of sidelines is laser-guided to invoke nostalgia with viewers old enough to have been there. Presumably, it will simultaneously perplex those born after, oh, say 1990. Those of an age, all get reminded of the heady days of tape-to-tape film piracy, that and when “grot mags” were the prevalent smut distribution method, though. Yay.

Whilst ‘looking after’ a large amount of stolen ‘state of the art electronics’ (cue Lavender unpacking a classic top-loader VHS) for a local loan shark, they begin knocking out pirate copies of E.T. However, when Fitzpatrick can’t work the kit properly and tapes over their master of the film with with some other, even more questionable, footage acquired during another money making venture, problems ensue. 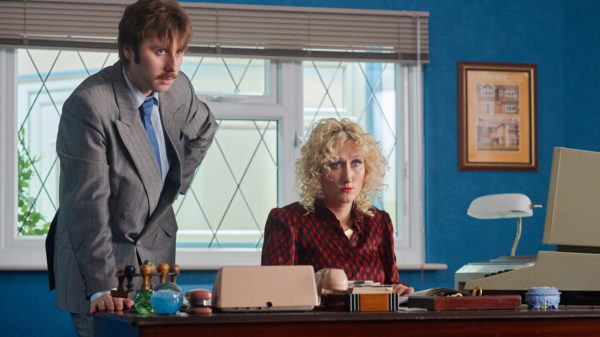 The comedy of White Gold is a strange thing. Well, at least it is to me. It asks us to recall the 80s, while simultaneously reminding us how rubbish it all was. Then it presents the travails of characters you’re presumably meant to care about, or at least be amused by, while constantly robbing them of almost any redeeming feature.

I vividly recall many of the things they riff on. I even had a dodgy dub E.T., yet nothing here evokes anything near affection for the time. And nothing these characters do promotes affection for them, really. It feels like White Gold can’t really decide whether it loves or hates the era in which its set.

That’s perfectly understandable. However, unlike say, Life on Mars and Ashes to Ashes’ – which both share the same, quite lovely, set dressing and aesthetic – use of a person out of time to serve as our viewpoint on the age, White Gold‘s main men are totally immersed in it. What’s more, they love it. 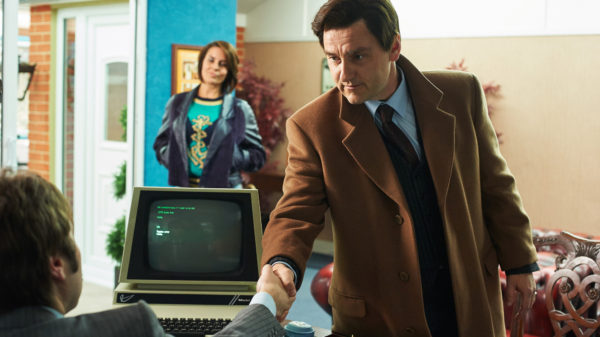 This feels like it takes away the metaphorically raised eyebrow somewhat, making it more like watching a show with Gene Hunt as the hero, with nobody there to comment or contrast his behaviour. And then being asked to hold him up as example of ‘hilarious’ police brutality in the 70s. There is nothing even close to the brilliance of Life on Mars‘ Camberwick Green riff, for example.

Only Lavender comes close to being a voice of civility in the group, but is so easily influenced by all around him as to provide no check or balance, and he is constantly ridiculed for his attitudes. Anyone in White Gold you have any kind of sympathy, or empathy, for either turns out to be as bad as the rest, or basically gets trodden on.

This is Vincent Swann’s world, we just dip into it for 30 minutes a week.

This week, as Vincent attempts to avoid an Inland Revenue officer that’s been visiting the office trying to track him down, Vincent attempts to organise at a family day out. He almost pulls it around, too. Yet, by the end of the episode, he’s traded back any affection you may have built up for him (and more) by hitting on his son’s schoolteacher and roping lavender into taking the aforementioned inland revenue lady on an excruciatingly staged date.

By the time the trio have made it on to Police 5, and are forced to get rid of all the hooky gear – along with anything that links them to the pirated videos – the only person that’s profited from all the fun and games is the local gangster. Everyone is right back where they started, including we viewers. 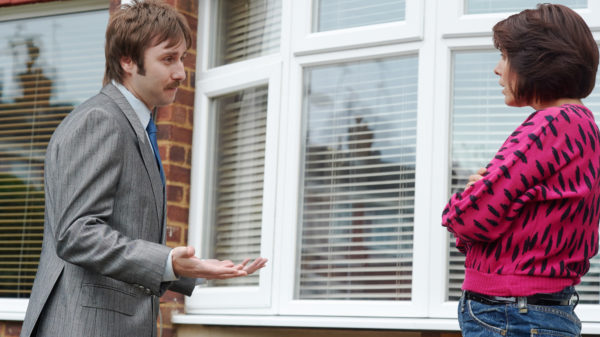 That’s a standard trope for wide-boy comedy, admittedly. Everything needs to be reset for next week’s caper, after all. And everything is. However, there’s none of the charm you’d like to make you want to come back to White Gold.

Nobody comes out of this better, or nicer, or having learned something… Not even the viewers, we suspect. Unless these events begin to accrue into something larger, unless there’s some kind of kickback for the way Vincent acts – which there may just be – one wonders why you would.