Musicals based on movies are quite the norm now, with huge successes such as The Producers and Legally Blonde, but how does this Michael Caine/Steve Martin screen romp from 1988 hold up on a London stage in the 2010s?

Like those two aforementioned adaptations, Dirty Rotten Scoundrels: The Musical also expands and illuminates its source material, bettering what had come before. The Frank Oz movie is a fairly pedestrian trip, offering regular chuckles but little more, but this West End production elicits laughs from every corner of the stage, in every move that’s made and every lyric in every song.

The plot follows, quite strictly, that of the film (with only one minor deviation, which we’ll come to later). Confidence trickster Lawrence Jameson, played here by TV star Robert Lindsay (My Family), teams up with fellow conman Freddy Benson, portrayed by comedian Rufus Hound (Celebrity Juice), in the French Riveria in an uneasy alliance which sees them battling for the money of “American Soap Queen”, Christine Colgate. With, of course, hilarious consequences.

Due to the nature of the musical – very knowing and full of fun – both Lindsay and Hound make full use of their comedic talents to engage the audience. The former completely abandons Caine’s style (somewhat stiff, other than his Austrian impersonation) and injects his wealth of stagecraft hilarity into a thoroughly mesmerising performance, rendering any fourth wall redundant.

Elsewhere, the cast are just as strong and engaging. Samathana Bond (Downton Abbey) adds style and a wink of the eye as Muriel Eubanks whilst John Marquez (Doc Martin) is perfectly cast as the friendly Frenchman and Jameson’s buddy, Inspector Andre Thibault.

Special mention must go to Lizzy Connolly for her West End debut as daughter of Oklahoma, the busty, bold and abrasive Jolene Oaks. It’s a small(ish) part but Connolly makes her mark wonderfully with impressive moves, a fulsome voice and comedic talent that is bound to grow. 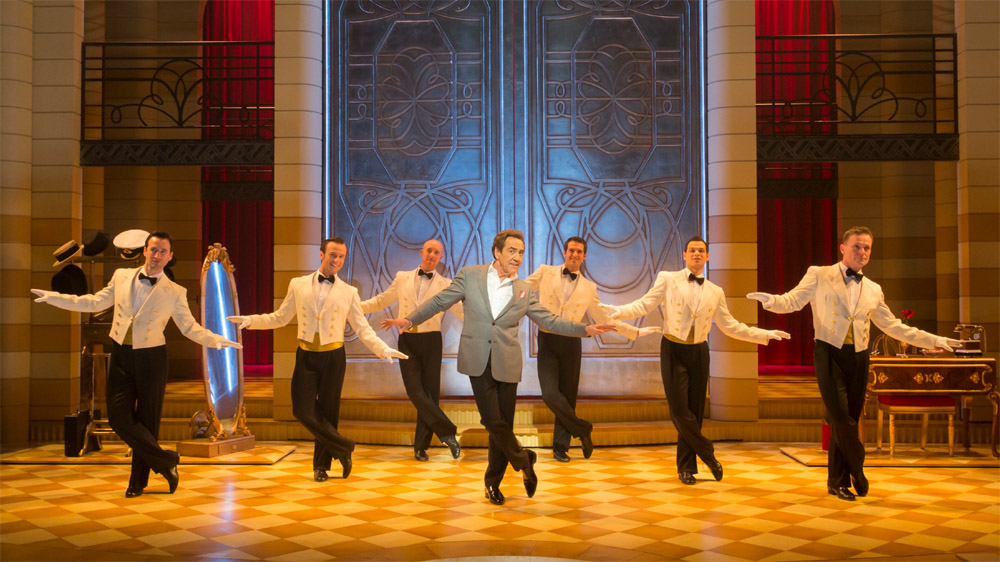 The ensemble cast too is terrific on both the eye and ear, never overpowering the cast and complementing the sense of fun and naughtiness throughout. On this particular night, one of the ensemble cast, Alice Fearn, replaced female lead Katherine Kingsley as Christine Colgate. If we hadn’t been informed of the change, we wouldn’t have known any better – so strong and assured was Fearn’s performance. Another star in the making.

The tunes match the frivolity and fun but also the wit and intelligence underlying the show. Whilst most numbers are barnstormers with cheeky lyrics, the odd slow tempo number turns a parodic head with some gigglesome X Factor-style histrionics and more fourth wall-breaking fun.

On the slight downside, the characters of Muriel and the Inspector, played so brilliantly by Bond and Marquez, are sidelined in the second half – a great shame as both actors were outstanding – and some of the dance sequences were perhaps a tad too long (though expertly performed).

Those minor quibbles aside, Dirty Rotten Scoundrels: The Musical is a dirty, rotten success. Packed full of laughs, your smile won’t leave for some time after.

Performed on Tuesday 3 June 2014 at the Savoy Theatre in London.