It’s odd, the boxes we put people in.

Joe Pasquale is generally thought of as a squeaky-voiced light entertainment performer, Todd Carty is often considered a depressed barrow boy (or an overly cheerful school kid, depending on your age), and Monty Python is regarded as the summit of all sketch shows.

It’s this last that’s particularly odd, since the team were making significant efforts to do what might even be called anti-sketch. It’s no wonder that some of their best work came in their later films, when completely unshackled from the constraints of a format that they never really adhered much to anyway.

And so we have Spamalot. The tag line for Eric Idle’s musical is that it has been (lovingly) ripped off from the film Monty Python and the Holy Grail. This much is true, and it’s also the case that the production pilfers gleefully from all manner of other avenues, from the overblown production numbers of Broadway musicals of the 1960s, right through to the overblown music videos of Barry Manilow.

It’s not so much that the plot has been stolen from the film; it’s more that the main bullet points have been taken from the synopsis and cheerfully mashed together to make a musical. Most songs are vicious takedowns of the type of oh-so-worthy breakout numbers that every musical relies on to make it big. 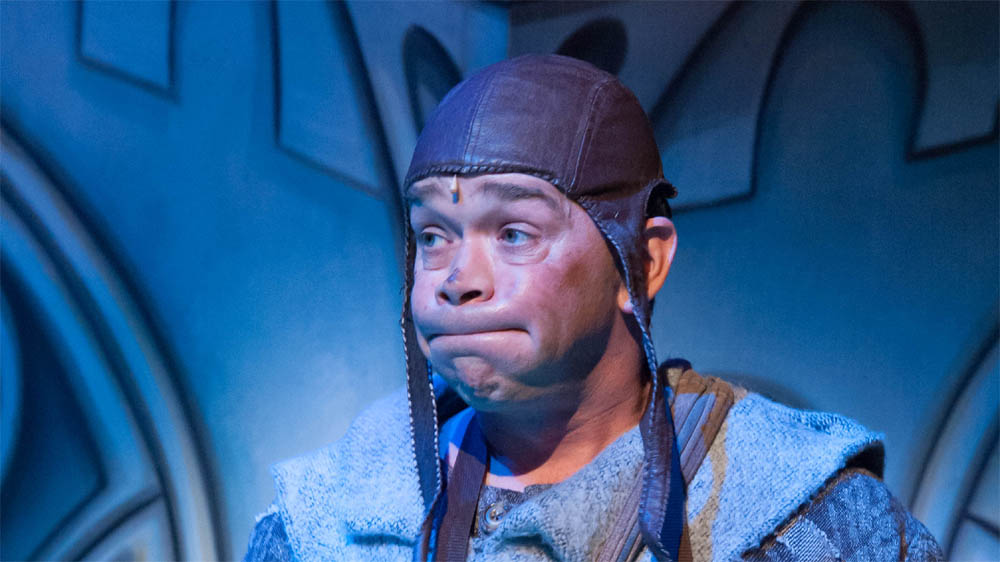 One highlight is ‘I’m All Alone’, in which King Arthur laments his solitary journey, belied by the fact that it’s a full company number (with a stage manager brought on to really hammer the point home). One particularly vicious bit of satire (‘You Won’t Succeed In Showbiz’) gets some of the more contentious lyrics altered for British audiences.

Joe Pasquale has cheeky fun as King Arthur, giving the role an equal amount of wide-eyed innocence and world weariness (direct address to audience: ‘You can laugh; this is my career’).

Todd Carty has good fun in a literally thankless role as the coconut shell clacking Patsy, channelling a Gumby and the confused expression of a Gilliam, while Sarah Earnshaw is great as The Lady Of The Lake.

The gag is that her role, with an impressive vocal range, is the one that steals the show, but otherwise she doesn’t have a great deal to do for the rest of the night. It is in her moments that Spamalot rises above its infectiously silly parody of show-boating musicals to something a lot more sublime (most obviously in the number ‘The Song That Goes Like This’).

The one thing you imagine that Spamalot really has been ripped off from, however, is those long ago student revues of the early ‘60s when Monty Python was first forming. Silly jokes, men in dresses, and running through it all, the whiff of academia.

The audience for the opening night at Brighton’s Theatre Royal is mixed, from geeky teens to the little old ladies that Terry Jones used to play so well, and it’s a glorious and beautiful sight to see them all wave their arms together while singing along to ‘Always Look On The Bright Side Of Life’.

Are you going to see Spamalot in Brighton? Let us know below…