Christopher Nolan’s Interstellar is a film which manages to be both breathtakingly epic in scale and emotionally close as it focuses on the fate of humanity and the promise made by a father to his daughter.

As a former pilot, Cooper (Matthew McConaughey) finds himself drawn into a space mission looking for a potential new home for the human race. We follow both this breathtakingly dangerous mission along with the increasingly desperate situation of those left behind on a dying planet.

While the film is clearly science fiction, the threat facing the planet seems easily believable as it takes place in a time barely removed from our own; humanity has befallen some form of unspecified disaster and with crops failing, the chances of survival look bleak. Nolan does not feel the need to spoon-feed the scenario and is delightfully light on exposition, allowing you to grasp the severity of the situation as the story slowly unfolds. 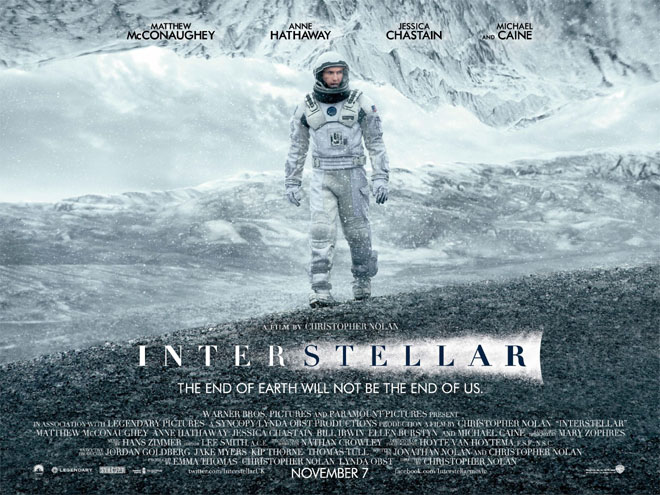 The cast is certainly worthy of the stellar tag; joining McConaughey is scientist Amelia Brand (Anne Hathaway) with Nolan stalwart Sir Michael Caine as her genius father. There is a terrific gnarled turn from John Lithgow at the film’s start, but the surprise performance comes from the young Mackenzie Foy, easily holding her own against the Oscar-winning cast as Cooper’s young daughter Murph.

Coupled with some stunning visuals and set-pieces taking which take place on land, at sea and in space, the story manages a couple of terrific rug-pull moments. In truth though, it is the human drama that shines over and above the sci-fi concept here which, while neat, is really rather traditional and reasonably easy to predict.

As we said before, Interstellar is a breathtaking film. Alongside the drama, you’ll mainline the theory of relativity, wormholes and gravity making it a highly intelligent blockbuster that poses some thought-provoking questions too.

> Order Interstellar on Blu-ray on Amazon.

What did you think of Interstellar? Let us know below…