Rellik‘s proving to be the kind of competent, grimace-to-the-drizzle, crime drama that the BBC’s been doing well for decades, but the longer it goes on the more it exposes its biggest problem: time.

And I’m not talking about the scheduling – although it’s being well-beaten by its 9pm rival, Liar, over on ITV – nor how it plays with time, jabbing at the rewind button and dragging us backwards through an increasingly turny-twisty murder case like your granddad trying to scroll back through Ceefax (one for the older readers, that), but how we have to wait a week between each jolt back. It really interrupts the reversey flow. Every week, just as it feels you’ve re-accustomed to yourself to it, it ends.

It sounds greedy, but Rellik would be more enjoyable as a binge-watch; gobbled all up in a few nights, or a week so that you could properly keep track and engage. Why the BBC didn’t slap the whole lot up on iPlayer in one go is a mystery as big as the show’s own. Instead Rellik is great On Demand viewing that has been smeared across 6 weeks like the last knife-edge of Marmite.

Week 3 of that smear! And much like that yeast extract paste, by now you’ll know if you love Rellik or hate it. It is an acquired taste: not everyone is up for the stark imagery of rats scurrying round a woman’s knickers, dead pigs hanging in the living room, a woman’s mutilated naked corpse riding a playground merry-go-round, or blood splashing out of a bathtub like the most horrific ad for Cillit Bang ever. 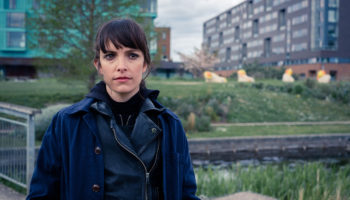 For Gabriel, much of the episode is spent away from the acid-killer case, as he tracks down his daughter Hannanh (Shannon Tarbet), who has decided to escape her parents’ constant bickering and go on a potentially life-threatening bender.

Cue Gabriel hunting her down, combining his detective and daddy skills as he traces her through grim council estates and clubs that look like where colours and sounds go to abandon hope. Rellik isn’t the kind of show to let your daughter go missing in, say, the Candy, Puppy Dogs & Fireworks Store. It’s another excuse for Richard Dormer not to smile. His grimace is so perpetual that any rare time Gabriel’s lips do curve upwards, I think the screen’s been flipped upside down.

Given that we know from minute one Hannah is found safe and alive, there isn’t a great deal to invest in. Just sit back and look at the misery that leads up to it. Far more interesting is the tangent the show takes us on this week, following potential suspect, the mysterious Mr. Patrick Barker (Paul Rhys) seen last week escaping the country on a plane.

His storyline is yet again a demonstration of how well Rellik‘s investigation-in-reverse wrinkle can work, as a man who we thought last week might be the acid killer turns out not to be the actual killer, but someone almost as bad.

It’s a neat little murder-mystery of its own, nestled, Matryoshka Doll style, within the grander, gruesome framework of Rellik. It could be an episode of its own on any other police procedural, but by being told backwards it works doubly well, providing us with an extra twist.

Barker’s wife Rebecca arrives home at their swanky apartment to find him having sex with his young mistress. Drama enough! Except it turns out he’s having sex with 20 year-old Sally (Tanya Reynolds), who’s the step-daughter he’s been raising since she was a little girl. Drama enough? No, during a heated argument, Sally wallops her mum over the head with an award, killing her dead. You might say she’s become a trophied wife.

Baker makes his plan to do away with the ex-missus. He spies in the paper the acid-killer’s latest killing and decides to make it look as though Rebecca was killed by him. Good job that trophy doubles as a knife, eh? I was going to be snarky and ask where he got the acid, but sadly the news these days shows us anyone can easily get their hands on the wretched stuff.

Sadly we never find out how he manages to get the body out of the building without being spotted. Surely in a swank apartment complex like that, in one of the most CCTV’d cities on the planet, he’d have been spotted lugging a body-shaped something? Columbo would be right on that. Perhaps he did it the same way DC Andrea Reed (Mimi Ndiweni) snuck that pig carcass into her colleague Sam’s living room.

But that’s about as big as the mysteries get this week. We’re edging closer to the identity of the acid killer (if it’s not Paterson Joseph I’ll dissolve my hat in acid) and judging by the final scene, the acid killer is edging closer to Gabriel. Wait, we’re going backwards… So he/she’s getting edging further away…? Oh I give up. Maybe that’s why it’s not binge-able: to give idiots like me a week to get our heads around what we’ve seen.