The third episode of All 4’s interesting new drama, The End of the F***ing World starts up right where the previous ended, giving it a feel that if you binge watched the show, it would feel like a movie. As it stands, the episodes are short and have no room to recap, so we’re right back into the mad world of Alyssa and James.

This week, they break into the home of Professor Clive Koch, played by Sherlock’s Jonathan Aris, and spend the time ‘lying low’.

We get some wonderful scenes between Alyssa and James, their narratives reduced to a minimum while their conversation and chemistry increases. That is until, of course, James inevitably does the wrong thing and Alyssa seeks comfort with another to hide away from the shame of rejection. It’s a thread that seems so simple while watching: cause and effect. However, you’re only seeing one section of the puzzle. One that will have ramifications long after this episode finishes.

As we draw to a close and James ruminates on his wish to kill Alyssa, they find themselves together in the master bedroom of the house. The tone of the show has, despite the pre-existing violence and sex, darkened as Koch returns home and wakes Alyssa. In a scene that appears to draw inspiration from Gone Girl, James finally gets to fulfil his desire to kill.

As the episode draws to a close, our characters are artfully framed in what I believe should become the iconic image for the show. 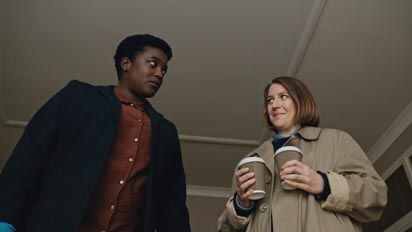 The fourth episode is perhaps the weakest of the series. There is next to no narration from the teens and it stands out as very different from the other episodes, yet there is the initial clean-up from the murder and it is key to the character development of both teens.

The outward calmness of Alyssa compared to the inward panic is wonderful narrative technique. It allows us to know her vulnerabilities while not having to bog down the plot with exposition.

Once they get away from the mess they’ve made, we find the two parting ways. It allows for each character to reflect upon the previous evening’s incident. This is a key episode for James, as he makes a number of realisations about himself.

We also get to meet the two detectives – Eunice and Teri – who have been brought in to explore the murder of Koch. Played by Gemma Whelan (Game of Thrones’ Yara Greyjoy) and Wunmi Modsaku (Black Mirror: Playtest) which introduces an element of Pulp Fiction stylings to proceedings. They are wonderful characters and it’s hard not to wish they made an appearance sooner.

The episode ends with our two characters still separate, neither thinking they will see the other again; their opinions and feelings about each other changed since the show started. Most notably is James’ development; it’s interesting that he appears to have had a personality epiphany so early into their journey and it begs the question, where will they go from here if he’s giving himself up so soon?