(Note: This preview covers the first two episodes out of the three)

‘So, is it good to be back Benjamin, after all this time?’

We’re back in Royston Vasey – it’s fitting we return with Benjamin (Shearsmith), the first character seen – and it doesn’t feel like it’s been away. It’s been fifteen years since the show was last on our screens (I know, right?) and the show is aware of the passage of time, harnessing its age and uses it for some character building, some of which is hilarious, some of which is hilari-tragic. All of it is delivered with the familiar deadpan pantomime style.

It feels acutely aware of the time its returning in and yet unworried about it. The comedy landscape has changed since the early 00’s, and certainly since in premiered on BBC Radio 20 years ago, but the show still feels as fresh, cutting edge, and arrestingly surreal, as it did when it debuted.

What’s wonderful is how easily you slip back into it. Perhaps its that the perverse part of your funny bone has been kept warm by Shearsmith & Pemberton’s Psychoville and Inside No.9, or maybe it’s that you’re crying out for something treacle-dark among the twinkly Christmas schmaltz. Or maybe it’s that League of Gentlemen was always hilarious and you just needed a reminder. If you did, this is as good a reminder as you’re going to get.

Comedy revivals often feel a bit forced, but nothing here feels like its been dusted off or reheated. All the old catchphrases are out and about, the beautiful visual gags decorate the grim Northern high street (a soup kitchen with ‘reduced stock’ is a particular favourite), but there are also nods to changes in social trends since we last left. A simple ‘Food Bank’ joke is obvious but gets away with it by being extremely well-executed, while Barbara and her newly ‘militant’, as the show puts it, enforcement of gender-neutral pronouns and safe safes early on is a sign even weird old Royston Vasey has not been isolated from progress. 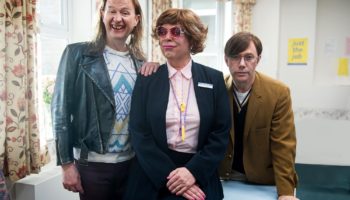 In fact progress is at the core of League of Gentelmen‘s Anniversary Special as, in a plot that has echoes of the intrusion of the new road in the first series, Royston Vasey faces being wiped off the map by a boundary change. It encapsulates the increasingly doomed feeling throughout that the show has come back just to kill its darlings off. On TV that is – they’ve just announced a 2018 live tour.

What’s on the menu then, a three episode run that feels even more densely plotted than series 3? Murder, kidnap, some genuinely creepy supernatural shenanigans, dark secrets, and some terrible things happening to animals. In short, the usual unusual.

Mr Chinnery is still accidentally sending animals to bloody demises; Legz Akimbo reunite for another teeth-grindingly cheesy play, this time about paedophilia; Rev. Bernice has escaped the elephant and is now mayor; Pauline is still tormenting the job seekers, albeit with a twist that’s too good to spoil here. And of course, it wouldn’t be the League without Edward and Tubbs, who’ve managed to undo their locomotive-based fate and set up (local) shop in a crumbling block of flats.

Most of the main characters reappear in the first two episodes – although there’s no sign of Hilary Briss or Papa Lazarou. With the latter you have to wonder if that’s because he always trod the line of black-face (if you have an hour, do listen to the episode of the Adam Buxton Podcast where he talks to Reece and Steve, where they give great insight into how comedy, cultural sensitivity, and political correctness has changed since they started). Still, it’d be a shame not to have them in. 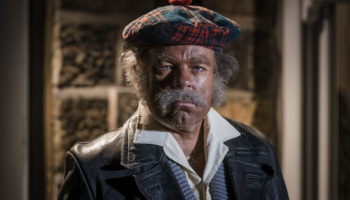 Perhaps the standout scene of Episode 2 features one of the smattering of new characters, Toddy (Gatiss), an elderly bingo caller who has a bingo-studded monologue that surprises by moving from the awkward, to the hilarious, to something brimming with bittersweet pathos. I loved it. Slower burning but typically League is the arrival of the untrustworthy Pop (Pemberton), at his son Al’s (Gatiss) house, in scenes also featuring Car Share‘s Sian Gibson.

Combining the old and the new to make something just as surreal, shocking, and most importantly, hilarious as the show always was, these new episodes (Return To Royston Vasey, Save Royston Vasey, & Royston Vasey Mon Amour) will feel like an early Christmas present for old fans, and may just have any newbies seeking out past series.

Watching them I couldn’t help but think of Royston Vasey’s famous sign. You’ll never leave? It’s like you never left in the first place.