To celebrate the DVD release on Monday 16 November on RLJ Entertainment’s Acorn Label, we’ve got DVDs signed by Doc Martin star Martin Clunes to give away to three of our Twitter followers! 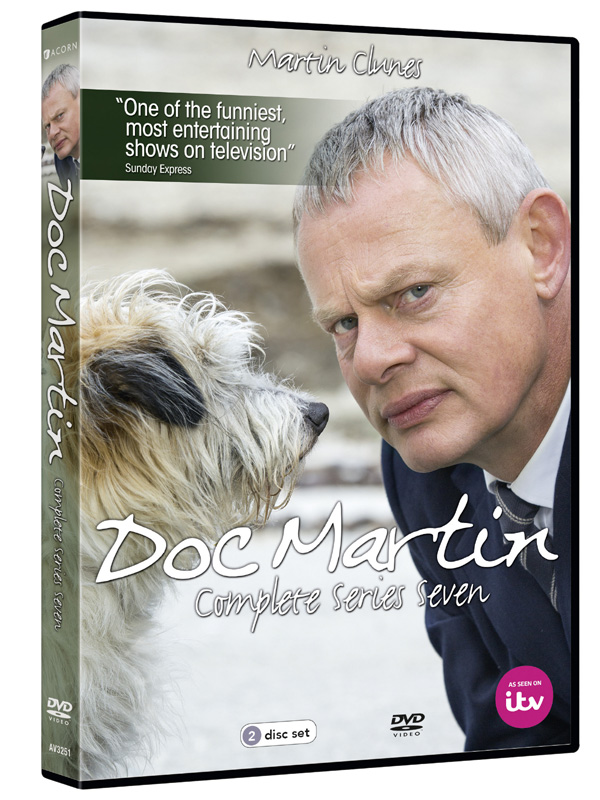 Set in the idyllic, sleepy hamlet of Portwenn in Cornwall, Dr. Martin Ellingham (Clunes – Men Behaving Badly), the town’s sole GP with a brusque bedside manner and a phobia of blood, returns for eight new episodes of the ratings winning drama, as he continues to challenge the community, his wife and even Buddy, a stray dog, who cannot resist his fervent rebuffs.

Having separated for a breather in Spain visiting her mother, Louisa (Caroline Catz – DCI Banks) has returned, but not into the arms of Doc Martin. Insisting on a break while they try and sort out their differences, Louisa moves into the family home and Martin moves out. In an effort to win her back, he agrees to undertake couples therapy with Dr Rachel Timoney (Emily Bevan – A Casual Vacancy).

Life in Portwenn continues around them as Al Large (Joe Absolom – Personal Affairs) tries to set up a new business while his father Bert (Ian McNeice – Rome) decides to move away from an old one; Aunt Ruth (Dame Eileen Atkins – Cold Mountain) faces a health issue which cannot be ignored; and Morwenna (Jessica Ransom – The Armstrong and Miller Show) has found a new flatmate who catches the eye of PC Penhale (John Marquez – In The Club).

But at the heart of it all lies the question – will Martin and Laura’s marriage be saved by therapy? And will Buddy make their house his home?

This competition has now closed. The winners are Em Foster from Pickering, Patricia Tait from Bicester and Tamsin Peters from Warwick.