As this week’s Doctor Who, The Eaters of Light, takes place in 2nd Century Scotland, here are our Top 5 Scottish stories from the show’s history.

‘The Eaters of Light’ is far from the first time the TARDIS has materialised north of the border.

Of course the Doctor is currently Scottish, and has been before (twice if you count David Tennant), but actually filming in Scotland is usually a little too far to stray, so Wales and the Home Counties have often doubled for the land of the brave.

There have been plenty of references in recent years, though. They’ve ranged from Amy’s heritage to jokes about Scottish Independence. Not to mention Strax’s preference for a Glasgow based brawl with some “very pleasant primitives”. No doubt many of them have been influenced by Steven Moffat’s Paisley background.

In celebration of ‘The Eaters of Light’ by Rona Munro, here’s our rundown of Doctor Who’s Scottish stories…

HG Wells took a trip from Scotland 1885 to the planet Karfel for Timelash, when a young noblewoman called Vena fell through time, disturbing his work, and the Sixth Doctor arrived to give her a lift home.

They fell into opposing the rule of the villainous Borad, a grotesque villain set on triggering an interstellar war with his planet’s neighbours, the Bandrils – that’s when he is not disposing rebels down his tinsel filled time tunnel to the highlands.

To be honest, there is not a lot of Scotland in the tale – but it is notable for offering an alternate explanation for the identity of the Loch Ness Monster and offers a scenery crunching performance from Blake’s 7’s Paul Darrow.

There was no location filming for this story, so Scotland was created at TV Centre.

In only the second story in Patrick Troughton’s time, the TARDIS brought the Doctor, Ben and Polly to 1746 in the wake of the battle of Culloden. Helping fleeing Jacobite soldiers, the travellers find themselves embroiled in a plot to illegally sell prisoners into slavery – and gain themselves a travelling companion in the process, the McLaren clan’s piper, Jamie McCrimmon. “Craeg an tuire!”

Sadly, none of the episodes from this pure-historical survive, but soundtrack recordings exist and some clips remain – and in this instance, Frensham Ponds in Surrey doubled for the Scottish Moors. 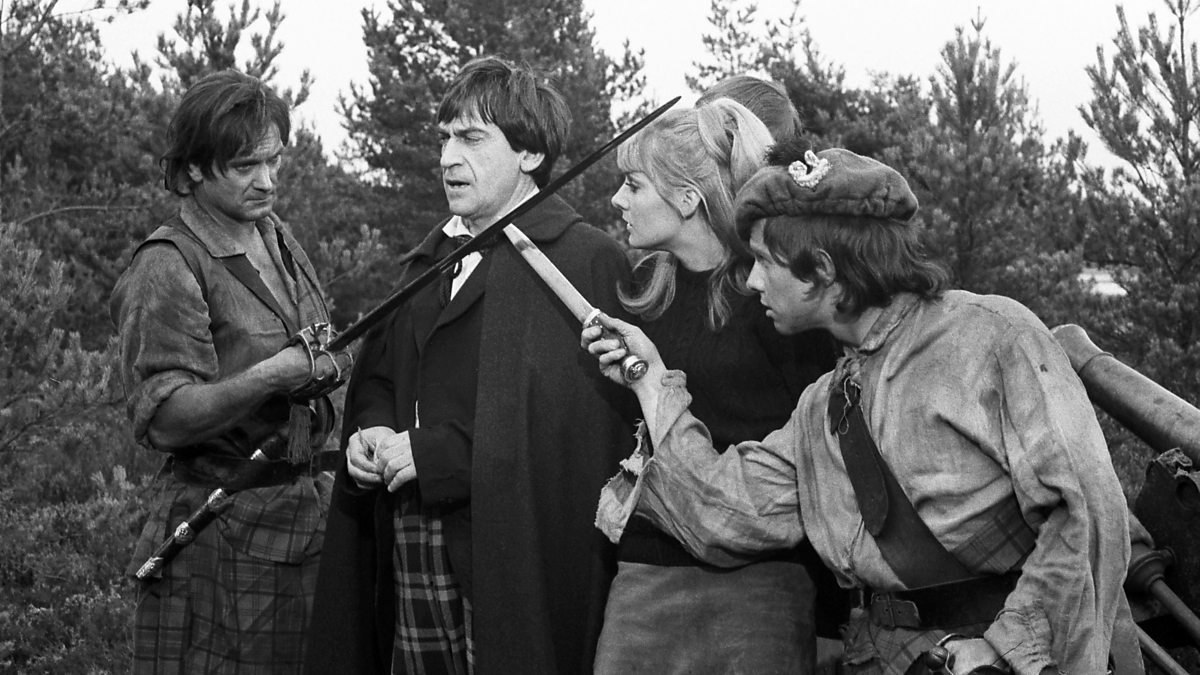 Caithness, 2119 was the setting for the underwater mining facility called “the Drum” where the Twelfth Doctor and Clara encountered ghosts after the crew unearthed an empty spaceship which carried the body of an alien warlord known as “The Fisher King”.

Featuring an unearthly scream, and the explanation of a bootstrap paradox from a guitar playing Doctor who played over the credits, the story takes on a decidedly temporal dimension as the TARDIS travels to visit the same location some one hundred and thirty-nine years earlier.

Of course, “The Drum” itself was a studio set, but the mock-Soviet village of KpacНoДap in ‘Before the Flood’ was filmed on location at MOD Caerwent, Monnouthshire.

Queen Victoria’s visit to Balmoral in 1879 was diverted by some king-fu monks, forcing her to visit the spend time at Torchwood Estate. Encountering the Tenth Doctor and Rose, it soon transpired that a plot was afoot to gain the crown by ensuring Her Majesty was bitten by an alien Werewolf.

Fortunately, the Monks had failed to take into account the Doctor’s ingenuity and the forward planning of Queen Victoria’s late husband, Prince Albert.

Summoned back to Earth by the Brigadier, the Fourth Doctor, Sarah and Harry came up against the terrifying alien shape-changers in present day Scotland. Using their monstrous Skarasen, the Zygon gambit involved attacking oil rigs and targeting the first International Energy Conference.

With their amazing design and organic technology, the Zygon’s remained ripe for a comeback – although on screen this did not happen until ‘The Day of the Doctor’.

This time, despite the Doctor dressing for the occasion – and even the Brigadier breaking out his kilt, filming took place primarily at locations in West Sussex, such as Climping Beach and Ambersham Common.