Peter Capaldi’s Doctor has finally made it to the screen, and if there is one person, presumably, who is breathing a greater sigh of relief than most, it’s Capaldi himself, who need now never again talk about those Radio Times fan letters because – at last! – he can be judged by the work, not the soundbites.

After what has seemed like an age – actually just over a fortnight – of touring the globe and smiling inscrutably on the One Show sofa, now he is here, in all his chalk-sniffing, hug-avoiding, karaoke-despising glory, and we like him a lot. Truthfully, we always knew we would. 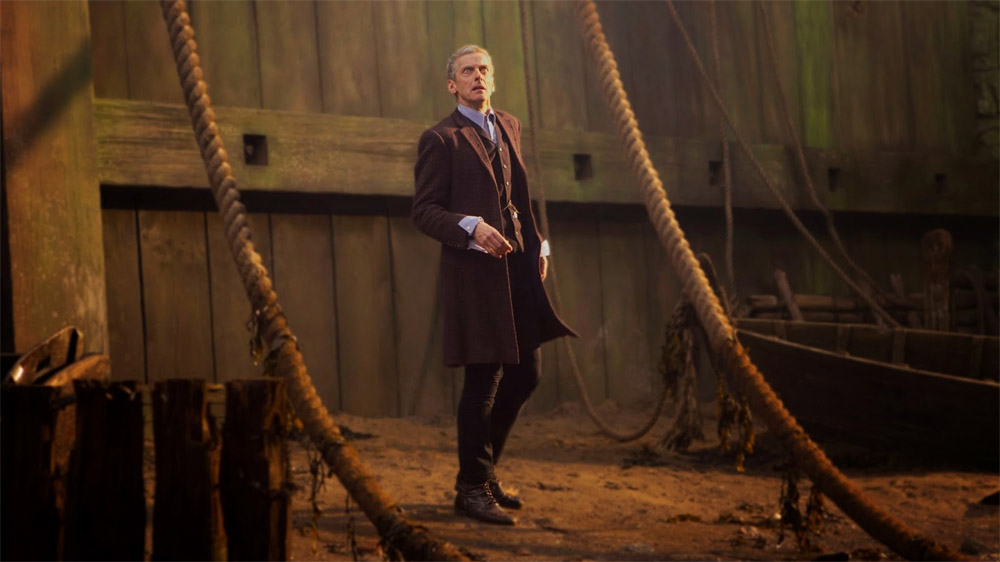 It’s a curious role, the Doctor – and perhaps a particularly curious one for as forensic an actor as Capaldi. You’ve got to be inside the part, making all those actorly decisions about what your motivation is, but outside it too, aware of which hero pose to strike to be imitated in the playground on Monday. However, the verdict is in: Capaldi excels at both these things, and is indeed a most fetching Time Lord, after all.

It may be a very gag-driven script he is given, for its first 25 minutes at least – the equivalent of a saucy Matt Smith caper that wants to cram in one-liner after one-liner about space boyfriends and flirting with dinosaurs. But if this is where things start, it’s not where they end up.

The Capaldi Doctor isn’t skittish, but a much more sombre creature, with a kind of thwarted and aching tenderness somewhere at the back of the eyes. Although this incarnation of the Doctor hasn’t entirely eliminated the camp – he’s a two-hearted space gypsy, go figure – there’s a stillness in key scenes which speaks, as Vastra does, about walking ‘this universe for centuries untold’. 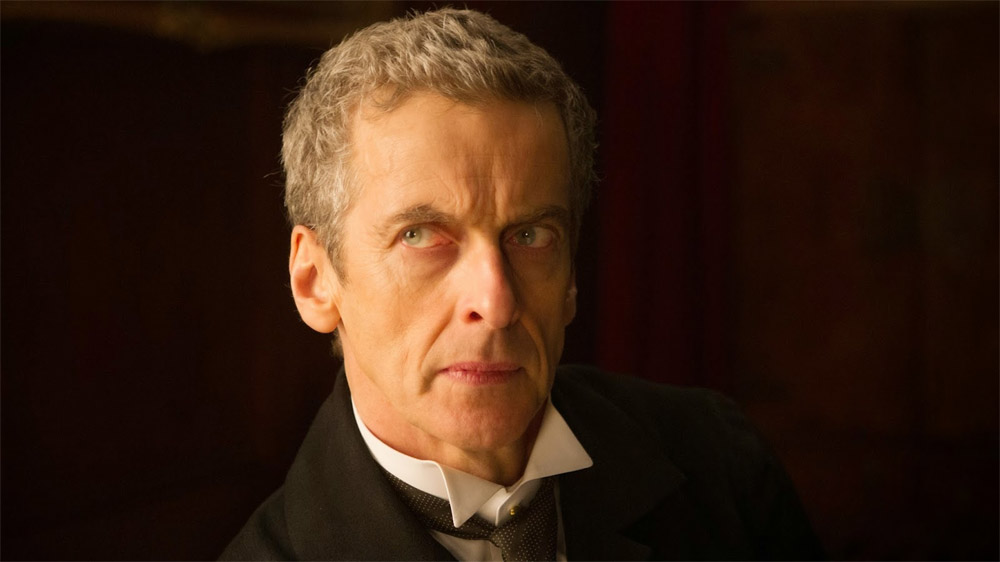 In the flipside of all the comic misunderstandings in the episode, the scene where the bed-bound Doctor translates dinosaur but seems to speak about himself is most notable. ‘I am alone… the trees and the sky have gone… The wind bites now.’ This Doctor stops spinning to notice the biting of the wind.

It’s not the only similarity he’s got with a dinosaur – and not just because the script is so keen to stress his aged appearance. When the Doctor proudly declares ‘Me!’, as he prepares to exit his bedroom via the window, he bites out the line with savage glee.

For a brief moment, he is the Birdman of old London Town, capering around like all the other lunatic roof-dwellers yearning for escape. Maybe this is why, when togged out in his full clobber, there’s something of the pterodactyl about his Doctor: all beaky and beady, with his Crombie coat ready to take flight. 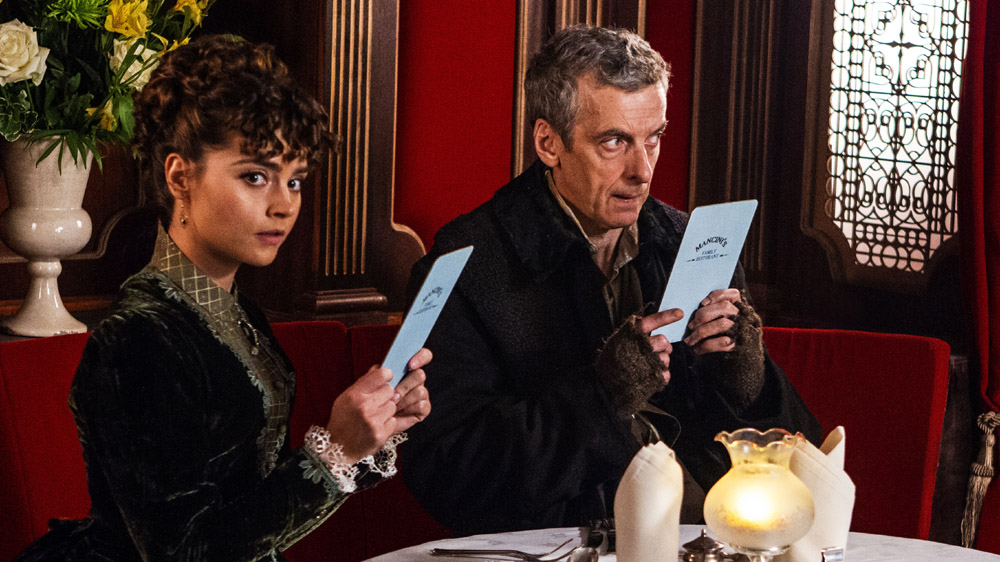 However, hand in hand with the pathos goes something lighter. Capaldi’s gift at comedy is hardly in doubt. So much we know from Malcolm Tucker. But his mimed reassurances to the dinosaur that he will take her home show off the skill most adroitly, and reveal a crumpled charm that was never part of Tucker’s DNA.

His always on the edge of pissed-offness Scottishness helps too. But then, this is a Doctor about whose Scottishness so much is made.

It’s not something we saw coming, but it is nonetheless true. An unexpected side-effect of having a Doctor with a Scottish accent is how much like Steven Moffat he sounds when delivering the man’s dialogue. ‘I brought you along by accident,’ says Capaldi to the dinosaur, before lapsing into Moffat’s clumsy-around-women shtick. ‘That’s mostly how I meet girls, but don’t worry!’ It’s a reflection of the fact that, at this stage, the showrunner’s voice may be known to us, but Capaldi’s voice, as the Doctor, is not. Not yet. 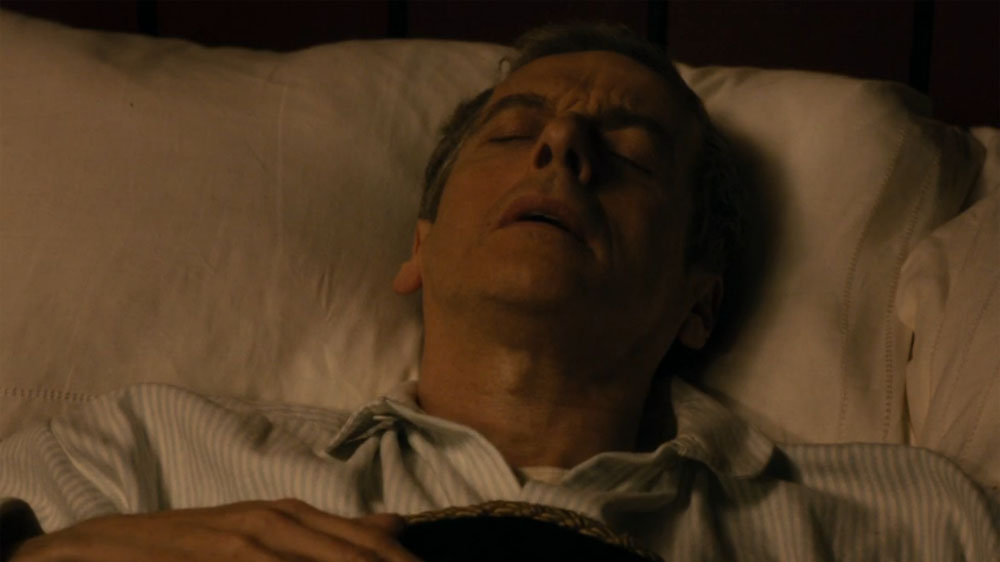 There’s a feeling – as there should be in a post-regeneration episode – of the actor and the production team trying out postures to see which one fits. However, still it’s a little weird to hear the writer’s voice so clearly – the equivalent of Colin Baker, circa 1985, telling Peri to ‘stay tuned as we put bums on seats’.

‘Awwwchh’, the Doctor growls with guttural Scottishness, and you are aware that this is a man who can get to play all the Scottish heroes in one part: Wee Willie Winkie, in his nightgown; Dr Jekyll and Mr Hyde… There’s even a moment of pure Taggart as he asks, ‘Have there been any similar mudders?’

However compassionate this Doctor may be, he might just give you a kicking in the Gorbals – and in back-to-basics boots that are made for a kicking. 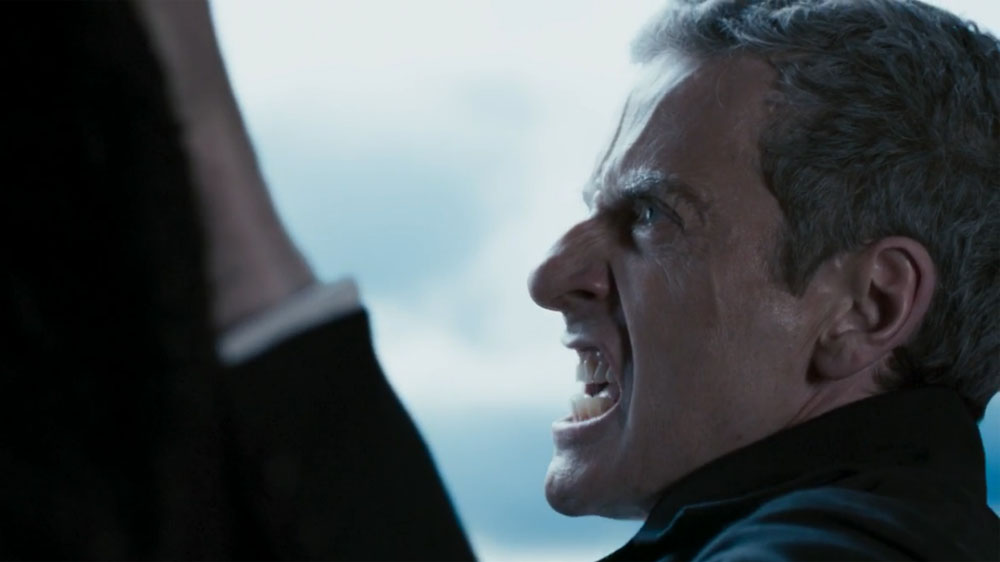 That’s why this Doctor works – that’s why this new era of Doctor Who may well work, because it is predicated on the possibility that this Doctor might abandon his companion… or push his enemy out of a hot air balloon. This Doctor is emotionally evasive, an almost liar. He tells Clara that he has ‘bought’ his tramp’s coat (which both is and isn’t true) and says of the sonic screwdriver’s voice setting, ’I don’t want to talk about it.’

Well, he may not want to discourse on the subject; but we do. We love Capaldi. Things may get dark from hereon. Ah, but we’ll be safe, as we’ll have the Doctor to protect us! Or will we?

And that, Mr Capaldi, is the last time we’ll mention those Radio Times letters. Promise.

What are your first impressions of Peter Capaldi’s Doctor? Let us know below…